The way Americans see it, the bogeyman is not hiding under the bed. The real monster is government corruption, according to the second annual Chapman University Survey of American Fears (2015).

The way Americans see it, the bogeyman is not hiding under the bed. The real monsters are in the halls of government, statehouses and elective offices across the land, according to the second annual
Chapman University Survey of American Fears
(2015).

Corruption of government officials topped the survey’s list of the 10 things Americans fear most. Close on the heels of what respondents apparently see as a troop of conniving, colluding and cheating leaders is cyber-terrorism and corporate tracking of personal information. Those top three fears are connected in a kind of hand-wringing trifecta, said Christopher Bader, Ph.D., who led the team effort. 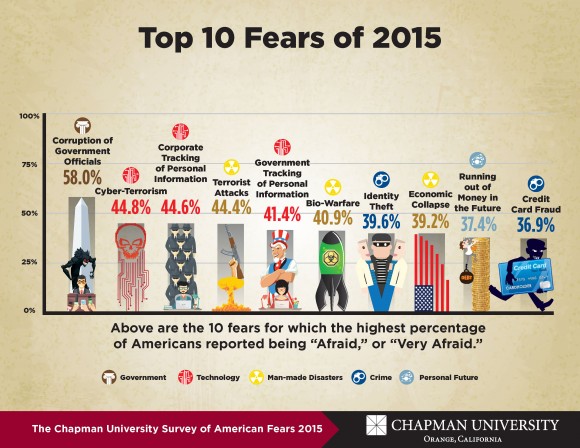 “The 2015 survey data shows us the top fears are heavily based in economic and ‘big brother’ type issues.” Bader said. “People often fear what they cannot control, and technology and the future of our economy are two aspects of life that Americans find very unpredictable at the moment.”

Each year the survey digs deep into Americans’ fears and examines their potential causes as well as the consequences they have on daily life, voting patterns and personal and societal behavior. The comprehensive survey includes extensive background information about respondents, allowing the social scientists to study how fears vary among different groups.

The survey asked respondents about 88 fears across a broad range of categories including worries about the government, crime, the environment, the future, technology, aging, sickness and health; natural and man-made disasters, claustrophobia, clowns and many other personal anxieties; and a host of other qualms.

More than 1,500 adults from across the nation and all walks of life were surveyed. The data is organized into five basic categories — personal fears, acting out of fear, natural disasters, paranormal fears and domains of fear.

Acting out of fear


Acting out of fear was a new element to the 2015 survey. The researchers asked respondents if they had engaged in particular actions because of their fears. They learned that nearly a quarter of Americans report voting for a particular candidate because of their fears; and more than 10 percent have purchased a gun out of fear. Other behaviors driven by fear included sending kids to private schools and purchasing a home alarm system. 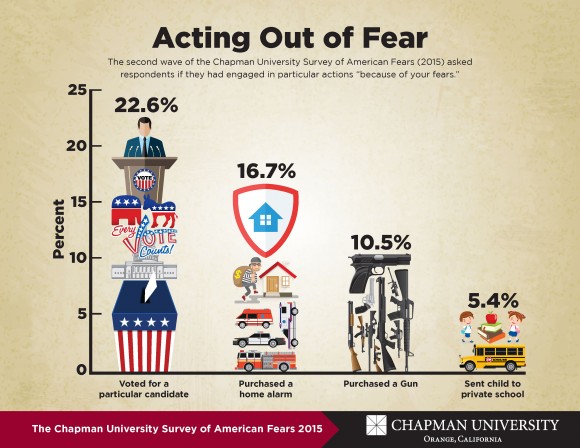 “Fear of the government had the strongest relationship with buying a gun because of fear,” said L. Edward Day, Ph.D., and lead researcher on this portion of the survey. “People who have purchased a gun because of fear also have high levels of fear of technology and crime.”

The top 10 things Americans fear the most are:


More than half of the respondents fear they will experience a natural or manmade disaster. Further, 86 percent believe an emergency kit would improve their chances of surviving a disaster; however 72 percent indicate they have made no effort to put together such a kit.

“We found a major disconnect between people’s expectations of what would happen in a disaster and the reality of a disaster’s aftermath,” said Ann Gordon, Ph.D., and lead researcher on the disaster portion of the survey. “The number one excuse given by Americans for not having an emergency kit is that they expect first responders to come to their aid immediately—this is an unrealistic belief in the wake of a natural disaster.”

The survey showed that the top excuses Americans gave for lack of disaster preparedness are:


Others reported they could not afford to prepare or purchase an emergency kit.

FEMA and Red Cross materials suggest that people have their own food, water, prescription medication and other supplies for at least 72 hours following a disaster, as local officials may not be able to reach everyone immediately.


The Chapman University 2015 Survey of American Fears included items on paranormal beliefs ranging from Bigfoot and psychic powers to haunted houses and the power of dreams. The data shows more than 40 percent of Americans believe that places can be haunted by spirits; and more than a fourth believe that the living and the dead can communicate with each other. Twenty percent of Americans believe both that aliens visited Earth in the ancient past, and that dreams can foretell the future.

The survey also shed light on certain characteristics of people who believe in the paranormal. People with the highest levels of paranormal beliefs have the following traits:


The research team leading this effort pared the information down into 10 major “domains” of fear, which encapsulates the entirety of the 88 individual fears the survey addressed. On average, Americans’ fears lay highest in the domains of man-made disasters, such as terrorist attacks, followed by technology and then the government – such as corruption and the Affordable Health Care Act.

A comprehensive list of the all the fears from
The Chapman Survey on American Fears
can be found
www.chapman.edu/fearsurvey
. In addition to Bader, Day and Gordon, student involvement was key in helping throughout the process.


The survey sample was a random sample of 1,541 Americans who are English speaking and over the age of 18. The survey was administered by
GFK (Knowledge Networks)
a consumer research company with expertise in probability samples. Data were collected between May 16, 2015, and May 25, 2015. The survey took, on average, 20 to 25 minutes to complete. The sample of the
Chapman University Survey of American Fears
mirrors the demographic characteristics of the U.S. Census.

The researchers continue to improve the survey as its results and continuing interviews provide more information about fear, as well as how best to collect fear-based information. The second wave of the survey modified question wording such that all questions about fear use the same response categories: “Very afraid,” “Afraid,” “Slightly afraid,” and “Not afraid.” Consequently a comparison of fears between 2014 and 2015 should not be conducted without consultation with the researchers, who can explain the proper method for conducting comparisons across waves.