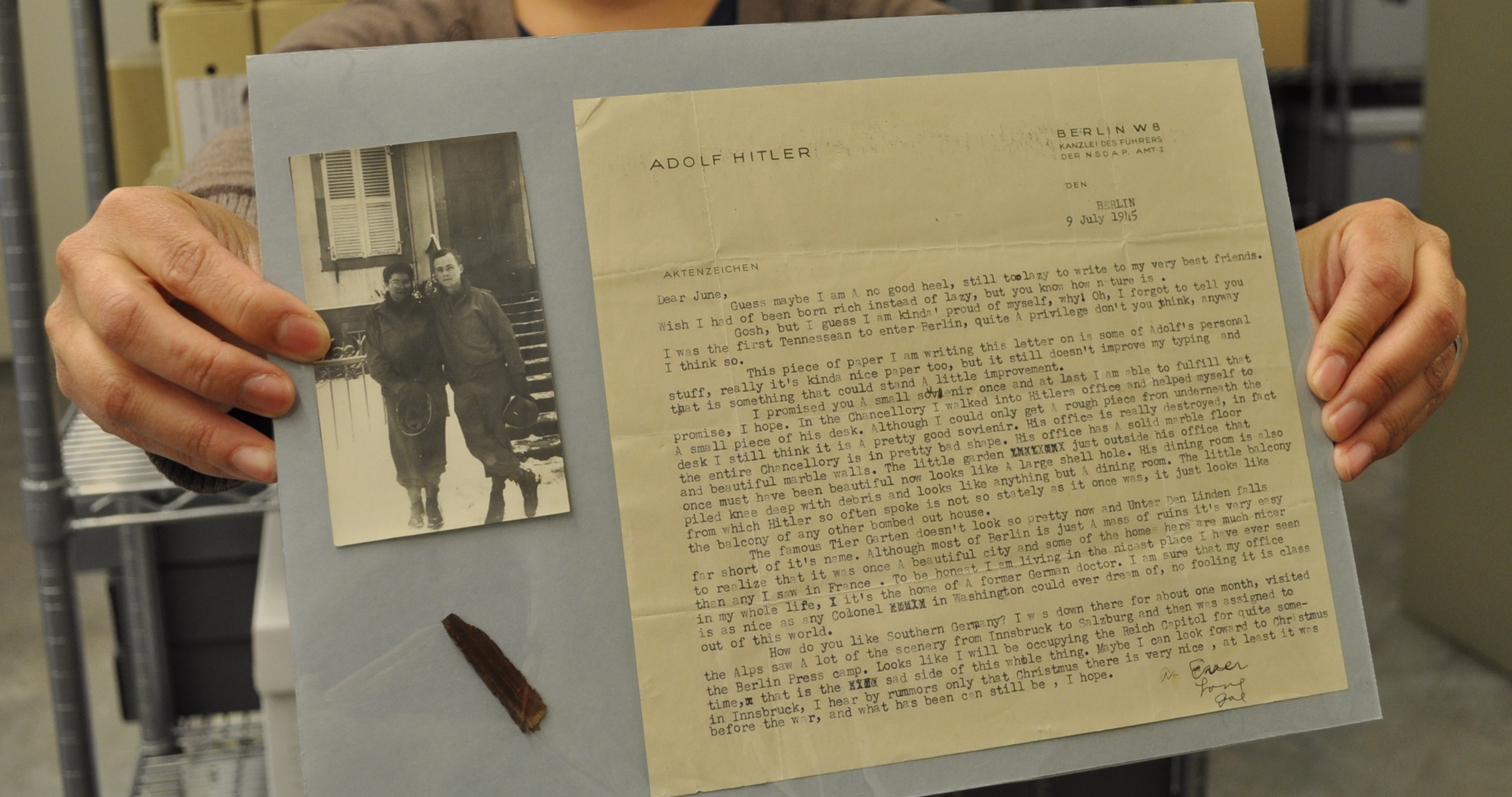 Seventy years ago this month U.S. Army Staff Sgt. Horace Evers was among the first Allied soldiers to enter Hitler’s Munich apartment, just days after the dictator committed suicide. Upon discovering Hitler’s personal stationery, Evers crossed out “Adolph Hitler” on the fine linen notepaper, wrote his own and penned a letter to his family describing the destruction of Munich and the shock of seeing the Dachau concentration camp.

For the first time ever, that letter will be displayed to the public in a Chapman University exhibition honoring the 70th anniversary of World War II’s V-E Day. The exhibition, opening Thursday, May 7, combines two displays – “War Comes Home: The Legacy,” which focuses on veterans’ perspectives of war through letters and journals, and the “V-E Day Commemoration Exhibit,” a salute to the May 8, 1945, anniversary of
victory in Europe
.


The exhibits will be opened to the public at a reception Thursday, May 7, from 5:30 to 7 p.m., in the first floor Allred Entrada of Leatherby Libraries. Admission is free.


In addition to Evers’ letter, the “V-E Day Commemoration Exhibit” will include a variety of WW II materials from the Chapman archives, including a similar letter written on Hitler’s stationery by a soldier who even carved out a piece of Hitler’s desk.

This is also the first opportunity the public will have to view letters from Chapman’s
Center for American War Letters
, directed by bestselling author Andrew Carroll. Carroll has been traveling the nation and the world collecting letters from every American war, from the American Revolution to today’s conflicts, and has donated more than 100,000 original letters to Chapman for study and exhibition.

“War Comes Home: The Legacy” is a multimedia exhibit that features an audio tour of selected authors and actors reading war correspondence from almost every major conflict in U.S. history. Both English and Spanish versions will be available and accessible by cell phone in the library, or remotely, by dialing 415-900-4461.

“War Comes Home: The Legacy” is a partnership between Cal Humanities, the California State Library and Exhibit Envoy. It is supported in part by the National Endowment for the Humanities, the BayTree Fund, The Whitman Fund, and the U.S. Institute of Museum and Library Services under the provisions of the Library Services and Technology Act, administered in California by the State Librarian. Learn more about Exhibit Envoy at
www.exhibitenvoy.org
and about Cal Humanities at
www.calhum.org
.

The “V-E Day” display will continue through June. “The War Comes Home” exhibit will close on June 20.