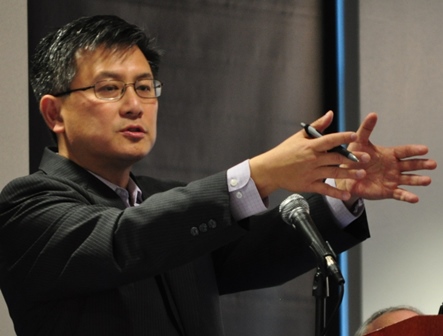 State Treasurer John Chiang was among the experts who participated in ‘The City of Bell Scandal Revisited,’ a daylong conference examining the largest local government scandal in California history.

California State Treasurer
John Chiang
had a pointed message for Chapman University students at a recent campus conference analyzing the corruption scandal that rocked the city of Bell, Calif., and led to reforms at city halls throughout the state.

“Get the education, so you can help govern,” Chiang said.

Chiang was among nearly two dozen experts who participated in
The City of Bell Scandal Revisited
, a daylong conference focused on the causes, fallout and legacy of the largest local government scandal in California history.

The conference was organized by Fred Smoller, Ph.D., associate professor in the Department of Political Science, and included several speakers who helped bring the scandal to light and the offenders to justice. Among them were Steve Cooley, the Los Angeles district attorney who coined the phrase “corruption on steroids,” and
Los Angeles Times
reporter Jeff Gottlieb, who shared the Pulitzer Prize for Public Service Reporting in 2011 for uncovering the corruption.

Like many of the speakers throughout the day, Chiang called for a robust standard of ethical conduct by public employees and elected officials and “meaningful civic involvement” by tax payers. Chiang was state controller during the crisis, but as state treasurer he has helped shed light on government salaries, spending and other financial information by making all the information available online. But he told students that as the next generation of leaders, they needed to remain vigilant and make such transparency a priority.

“You have to continue to help them think and grow and hold them accountable,” he said.

Couldn’t attend? Find it all here


Video coverage of the panel discussions and a collection of white papers written by conference participants can be found at the City of Bell Scandal Revisited website.


Smoller said the conference, which included a closing panel at the
Dale E. Fowler School of Law
with prosecuting and defense attorneys on the trials that followed, was unique in that it tackled the historic, political and legal issues related to the Bell scandal, and others like it, while the memories were still fresh.

“I liked the notion of academics sitting alongside the journalists who broke the story, the citizen activists responsible for the recall, the elected officials who investigated, the attorneys who prosecuted and defended the accused,” he said. “I thought it was important for students to see that you have to really drill down into something – four panels during a full day – to begin to develop understanding.”