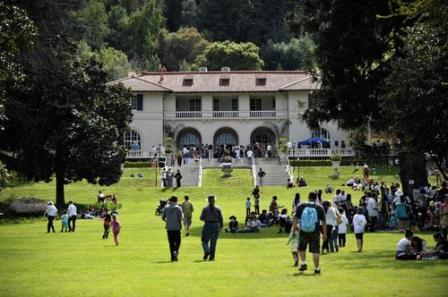 Guest lecturers in the arts to discuss multidisciplinarity at Sept. 24 talk

Three visionaries committed to supporting artists and arts education will be speak at Chapman University at 7 p.m. on Wednesday, Sept. 24

Three visionaries committed to supporting artists and arts education will speak at Chapman University at 7 p.m. on Wednesday, Sept. 24, in Argyros Forum 201. The talk is free and open to the public.

The talk will feature Sally Lucas, co-founder of the Lucas Artists Residency at the
Montalvo Arts Center;
Kelly Sciat, the director of the residency program; and Angela McConnell, director of Montalvo Arts Center. The Montalvo is a multidisciplinary nonprofit organization located at a 1912 villa and estate built in the Silicon Valley’s Saratoga Hills and bequeathed by its original owner to become a public arts facility.

Lucas and her husband, Don Lucas, grandparents of
studio art major
Madeline Lucas ‘15, established the artist residency program at the Montalvo’s historic grounds in 2004. Selected artists are offered fellowships ranging from one to three months at the estate.
Department of Art Montalvo Arts Center