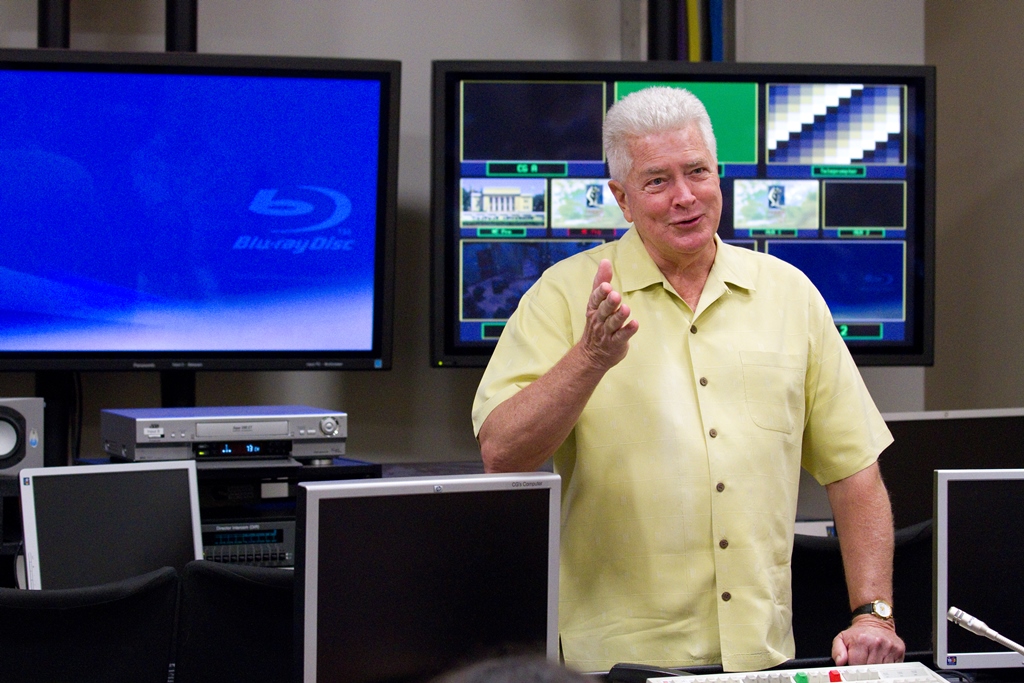 Due to popular demand, Chapman University will present two public screenings of the award-winning A Golden State of Mind: The Storytelling Genius of Huell Howser. The documentary film about the late California broadcasting icon by Jeff Swimmer, associate professor at Dodge College of Film and Media Arts, will screen on Saturday, Sept. 20, 2014, at 10:30 a.m. and 1:30 p.m. in Memorial Hall. Tickets are required for the screenings (see details below).

Since its premiere last spring at Chapman University, the film has drawn large and enthusiastic audiences. It was selected to open the Sacramento Film Festival, where it won Best Documentary, a coveted audience-choice award. It has also been selected for screening this month at the Temecula Valley International and Big Bear Lake International film festivals.

A Golden State of Mind: The Storytelling Genius of Huell Howser was created by Swimmer, director of international programs in Chapman’s Dodge College of Film and Media Arts. The film is sponsored by the Automobile Club of Southern California.

The University’s permanent Huell Howser exhibit in the Leatherby Libraries will also be open from 10 a.m. to 6 p.m., free of charge. A newly released DVD of the film will be available for fans to purchase at the event.

“We were astonished by the overwhelming popularity of this film during our March event, which drew nearly 5,000 people to the campus – and although we added several screenings throughout that day, we still had to turn some people away,” said Sheryl Bourgeois, Ph.D., Chapman’s executive vice president for university advancement. “We’ve been receiving so many calls and emails from people wondering when the film will screen again that we decided to hold another public event for Huell’s many fans.”

The documentary takes viewers on a behind-the-scenes tour of the California’s Gold and Road Trip television series. Fans can enjoy seeing how the series were shot and edited, with appearances by Howser’s friends, colleagues and the production team that helped him bring his offbeat and unforgettable adventures to the television screen.

Tickets for the film screenings are on sale at www.huellhowserarchives.com. Tickets purchased in advance are $12 each ($10 for AAA members), and if any remain, will be available at the door for $15 each ($10 for AAA members). Due to the popularity of this film, it should be noted that seating for each screening is limited, and tickets may sell out.

For more information, the public can call 714-744-2176 or email events@chapman.edu. Proceeds from the screenings will support the Huell Howser Archives at Chapman University.

A visitor parking permit ($2-$5) is required on the day of the screenings and can be purchased upon arrival. Parking will be available in the Barrera Structure at Sycamore Avenue and Lemon Street and in the Lastinger Structure under the stadium.

The University’s permanent Huell Howser exhibit, “That’s Amazing: Thirty Years of Huell Howser and California’s Gold,” launched in March 2014 with sponsorship by the Automobile Club of Southern California. The exhibit is in Chapman’s Leatherby Libraries and includes artifacts from Howser’s career and travels, a re-creation of his office where he edited episodes of
California’s Gold and his other television shows, and pieces from his found-art collection, among other displays.