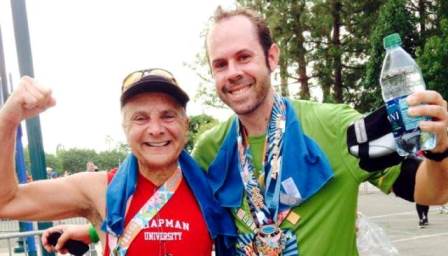 Running and gunning for another spot on ‘Bold and Beautiful’

Chapman University President Jim Doti ran the Disneyland Half Marathon on Sunday, Aug. 31, and finished in the top five for his age category.

Chapman University President Jim Doti ran the Disneyland Half Marathon on Sunday, Aug. 31, and finished in the top five in the males age 65-69 division. Being in the top 5 (he was No. 5 out of 83 in his division) meant that he received a trophy. He  was actually the oldest in his division, being only a few weeks from his 68
th
birthday.

President Doti is a legacy runner in this race, meaning that he’s run all 9 races since the Disneyland Half Marathon was inaugurated in 2006.

He ran the last few miles with Chapman alumnus
Casey Kasprzyk
’01, producer of the hit CBS daytime drama
The Bold and the Beautiful
.  President Doti has
appeared on B&B
three times, playing the role of “Mr. Chapman,” the chief financial officer of the fictional design firm on the show.  Says President Doti: “I used the last couple of miles of the race to impress upon Casey my demands for CFO Chapman’s fourth appearance on B&B.”