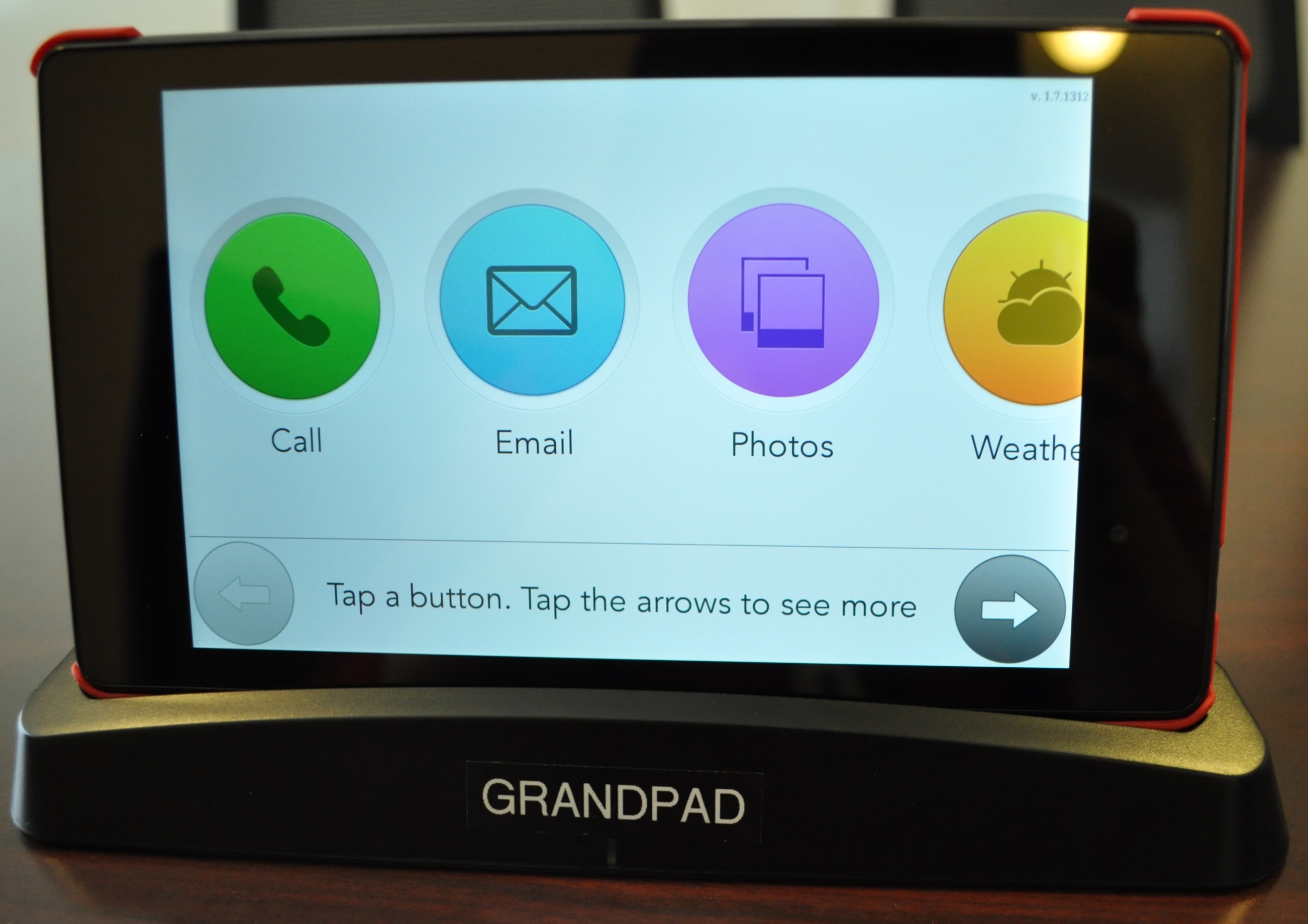 Students create grandPad with their grandmas and others in mind.

Margaret Silbar has a new grandma brag book. But ditch those old ideas about chunky photo albums that weigh down purses and hold just a couple dozen photographs.

Silbar, 81, is toting a thin computer tablet loaded up with a custom software system created by a team of Chapman University students from the School of Computational Sciences. And she couldn’t be happier with the device. Using a computer stylus, she quickly flips through several family photos and glows with pride as loved ones’ faces fill the screen.

“This is my grandson-in-law who runs the restaurant. He is just so good at what he does … Oh, there’s a Charlie photo. Charlie is Danny’s dog. … And this is my beautiful son, Adam, he’s the youngest of my four children,” says Silbar, who lives in Laguna Woods, Calif.

Then she chuckles. “And there’s a picture of Charlie with a basketball!”

But Silbar isn’t the only one smiling. The Chapman University entrepreneurs behind the device in Silbar’s hand – called grandPad – say they are delighted that their innovative modification of a seven-inch Android is a hit. Convinced that their own grandparents were missing out on the fun of social media, they figured others might be, too. So they set out to devise a tablet computer built with a few essential features that appeal to seniors, without the boggling surplus of applications, functions and programs pre-loaded on most tablets.

Using Android tablets, the student programmers wrote software that winnowed the functions down to phone, video phone, photos, email and voice mail, weather and a select collection of games and music. Streamlined graphics feature large-print instructions and colorful touch-screen buttons. At home, the tablets rest on a charging station but easily detach to go wherever the user goes. Users can choose to tap the screen directly with their fingers or opt for a stylus.

Isaac Lien ’17, co-founder of grandPad along with his father, Scott Lien, a former executive with Intuit, says the concept was sparked when he realized how much his own grandmothers hungered for family news and the latest photos of the grand kids, but were uncomfortable with programs like Skype, Facebook and even email.

“Both of my grandmas live in Iowa, and I live in California, so I only get to spend time with them a few times a year. I wanted to be able to send them photos, emails, and do video calls, but there was no easy way for us to do these things. That’s why we set out to create grandPad,” Lien says.

The team refined the software and marketing plan for several months, working out of Launch Labs, an incubator program within the Leatherby Center for Entrepreneurship. Their market research included interviews with more than 100 seniors and numerous user tests.

Among the key things they learned was that their target market particularly values privacy and finds onscreen keyboards to be awkward.

So grandPad’s design reflects those preferences. The students created a custom email program that allows only approved friends and family members to send email, photos and voice messages. Those senders can use Facebook to send photos to grandPad users, but no other Facebook user sees that activity.

The onscreen keyboard was scrapped and a touch screen format for voice mail was provided instead. Even a Friday happy headlines update, the Wednesday photos of Charlie – the company dog with the basketball – and a daily cartoon joke sent to grandPad users are curated and sent by in-house staff.

It’s all part of the safe design, says David Tyler ’14. Tyler, who graduated with a degree in computer science and is now in the computational sciences master’s program and was one of the key programmers of grandPad.

“There’s no way to get viruses. There are no pop-up windows saying ‘Install this.’ They cannot get infected,” Tyler says.

The team launched a soft opening this summer, making the grandPad tablets
available with an all-inclusive subscription fee, although they have not yet settled on a final price. They are also exploring the possibility of marketing it to secondary audiences, such as groups that have compromised dexterity because of disability, injury or chronic conditions, like Parkinson’s disease.

For early test users like Silbar, though, grandPad already has opened a new way of connecting with her family. When her grandson Ryan Burns ’14, a computer science graduate also involved with grandPad’s development, first brought a tablet to show her, she says she was hooked.

“I love pictures of my family,” she says. But the mobile devices her family used didn’t appeal to her. A shared computer in  her senior living community is too complicated to log onto. “I can do this myself. It’s incredible.”