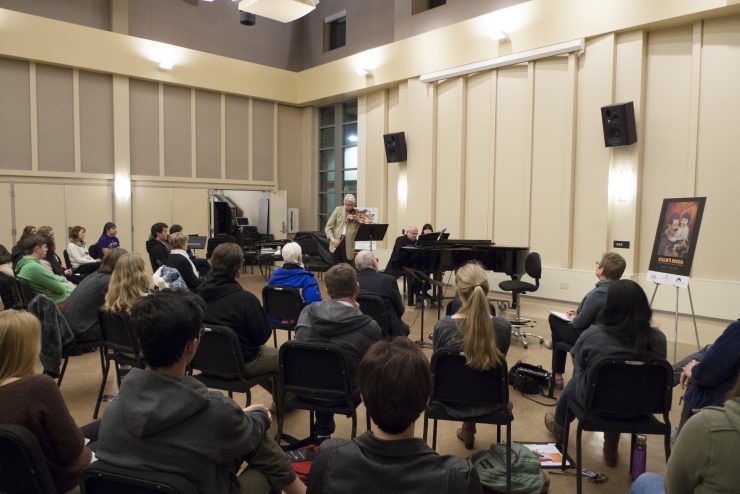 From Russia With Music and Art

The Chapman Global Arts Performance Program, founded by the Kay Family Foundation and in partnership with Paciﬁc Symphony, launched its ﬁrst Global Arts Festival, initiating an important annual cultural event that will salute and explore the arts and music of a different region of the world each year.

The Chapman Global Arts Performance Program, founded by the Kay Family Foundation and in partnership with Paciﬁc Symphony, launched its ﬁrst Global Arts Festival, initiating an important annual cultural event that will salute and explore the arts and music of a different region of the world each year.

This year, it was Russia, with the spotlight on the composer Dmitri Shostakovich (1906–1975), who faced unique artistic challenges living under the Soviet regime, yet produced some of the 20th century’s most memorable music.

The weeklong festival that kicked off Jan. 31 engaged ensembles, artists, students, faculty and the public in a wide ranging series of events, including concerts and recitals, art exhibitions and ﬁlm screenings, lectures and panel discussions, workshops and master classes.

“Music is indeed a vital part of the history of ideas,” said Chapman University Chancellor Daniele Struppa in opening the series, “and the nature of this festival and our partnership with Paciﬁc Symphony is to bring to light the interplay of disciplines in ways that indelibly connect music to history and to other forms of art.”

Paciﬁc Symphony, under the baton of Carl St.Clair, kicked off the festival at Segerstrom Concert Hall in Costa Mesa, with a concert featuring guest Russian piano virtuoso Alexander Toradze performing Shostakovich’s Piano Concerto No. 2. Toradze  was a leading ﬁgure in the festival, appearing at Chapman for several events. He performed in the President’s Piano Series with fellow Russian pianist Vakho Kodanashvili, and with Chapman viola professor and Paciﬁc Symphony principal violist Robert Becker in the Festival’s keynote event, a “Concert and Dialogue” with Chancellor Struppa.

Other arts leaders featured prominently in the festival included music historian Simon Volkov, whose groundbreaking interviews with Shostakovich changed the world’s collective opinion of the composer, whom many had previously viewed simply as a Soviet collaborator. Volkov’s interviews showed that Shostakovich was a truth-speaker forced to work within the Soviet system, who often dared to courageously challenge the supreme powers of the day, up to and including the dictator Stalin himself. Volkov, along with music critic and Paciﬁc Symphony artistic adviser Joseph Horowitz, gave several fascinating talks during the week  that illuminated many facets of Shostakovich’s career.

The visual arts were also prominently in focus, as a carefully curated exhibition “Stalin’s Russia: Visions of Happiness, Omens of Terror” opened in the Doy and Dee Henley Galleria in Argyros Forum. Paintings, posters, ceramics and prints, drawn from the collection  of Tom and Jeri Ferris, the Institute of Modern Russian Culture and the Wende Museum, showed a benevolent, grandfatherly Stalin hugging idealized Soviet children and greeting staunch, sun-bronzed commune members and factory workers. Co-curators Wendy Salmond, Ph.D., Chapman professor of art history, and Mark Konecny, Ph.D., associate director at the Institute of Modern Russian Culture at USC, selected pieces of art that were vivid reminders of art’s role, for better or worse, in propaganda and the promotion of an ideology.

Theatre arts were represented in a discussion by Chapman theatre professors John Benitz, Michael Nehring and Thomas Bradac on the inﬂuence of Stanislavsky and other Russians on American acting, theatre and ﬁlm. Vladimir Chernov, professor of  vocal studies at UCLA, offered a master class for voice students, and Chapman music composition professor Vera Ivanova, Ph.D., offered a lecture on Shostakovich’s early works. Colleen Neary, artistic director of Los Angeles Ballet, gave a lecture-demonstration on the Balanchine technique, derived by the great Russian-American choreographer from his classical Russian ballet roots.

Next year’s Global Arts Festival will focus on an entirely new subject and country. And the festival will shine even more brightly when the new Marybelle and Sebastian P. Musco Center for the Arts opens in 2016.