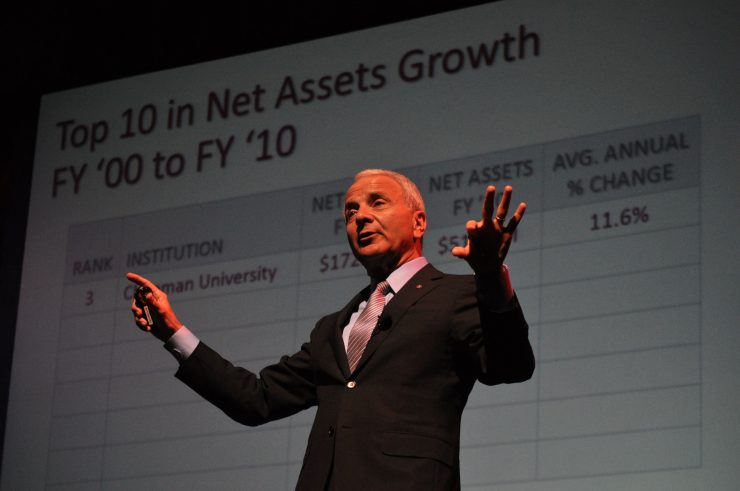 Reaching Out, Building Up: State of the University 2014

In his annual address, President Doti highlights Chapman’s continuing growth and its efforts to engage scholars from undeserved communities.

In his annual address, President Doti highlights Chapman’s continuing growth and its efforts to engage scholars from undeserved communities.

From building purchases to the formation of a community engagement program aimed at preparing low-income students for college, a spirit of growth and achievement was the theme of President Jim Doti’s 2014 State of the University Address.

“Chapman University is on the move,” Doti said, referencing this year’s commemorative poster, created by graphic design student Valerie Rustad ’14, which proclaims the same message with its colorful rendering of the campus and environs.

The additional funding brings the initiatives under one umbrella and allows them to expand their valuable work in the community. In addition, it supports scholarships for lower-income Chapman students.

“There are going to be all kinds of kids who are going to carry on your name as Klein Scholars,” said Doti, acknowledging Christine and Lon Cross, who head up the foundation named for Christine Cross’ parents and who were among the audience members gathered in Memorial Hall for the address.

Doti outlined other areas of growth that will help the University meet the needs of future students and the larger community, including news that it was in the process of purchasing a third building for the Harry and Diane Rinker Health Science Campus in Irvine. The 125,000-square-foot building will be leased out in the short term but eventually used to house future health science programs.

In addition to transformational support from donors, the president noted that helping make those advancements possible is the strength of the University’s endowment. The endowment enjoyed a steady rate of 11.6 percent growth in the last several years despite the economic downturn, placing Chapman third in a ranking of major universities by their net asset growth. And that trend is strengthening.

“We are maintaining that incredible growth rate because most recently, this last year, it increased 12.1 percent,” Doti said.The address came to a bittersweet close when the president announced that the Donald S. and Leonora N. Will Endowed Chair in Peace Studies would be created to honor the late Professor Donald Will, Ph.D., who held the Delp-Wilkinson Chair in Peace Studies. Support for the endowment came from every corner of the campus,from trustees to faculty and students,a reflection of Will’s “powerful impact” on the University community, Doti said.

“When I think of Don Will, he would work with people, he would bring about change and people would come away loving him even more,” Doti said. “He had that special quality.”

The entire State of the University address may also be viewed online.

Photo above: President Jim Doti gives the 2014 State of the University Address.