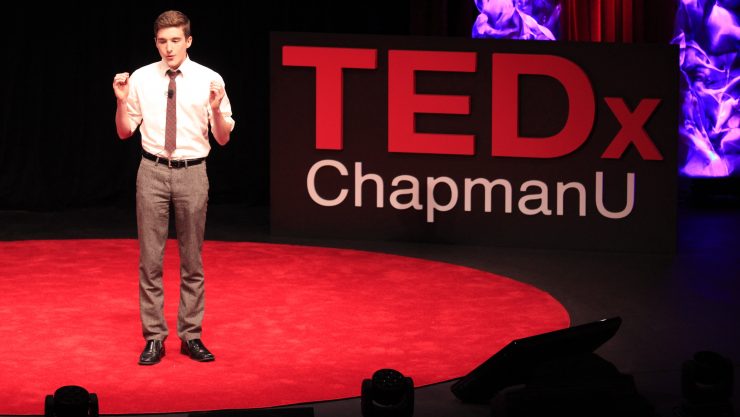 It’s all over the media: The most sought-after item of the 21st century, especially for women, is the gay accessory.

This essay is adapted from a speech by Chapman University sophomore Mark Pampanin, a political science major who won first place in the category of after-dinner speech at the 100th Biennial Pi Kappa Delta tournament, beating out forensic competitors from 89 other colleges and universities.

I know what you’re thinking. You want to start at a bitchin-boozy brunch where we swap purse puppies and face creams, right? Then you’ll want me to accompany you on a mani/pedi-gossip-makeup-shopping spree. Uh-huh. Because that is exactly why everyone wants a gay best friend.

It’s all over the media: The most sought-after item of the 21st century, especially for women, is the gay accessory. It is the must-have relationship – ego-boosting and politically in-season. But these faux relationships, held only for their cultural capital, reduce gay men to tools and undermine the value of friendship.

We see this gay best friend trend all over our pop culture media. In 2012, Teen Vogue declared us a “must have.” Gawker.com proclaimed the gay best friend a “hot, hot, hot” teen accessory. The Sundance Channel Website offered the top 10 reasons that girls need gay best friends.  Even China is pushing this platonic homo-harmony. The Global Times said that gay men are like a stylish handbag that offers male companionship without the fear of betrayal or getting knocked up.

This trend is especially pushed in television. The ultimate sitcom example is Will & Grace. Will is the gay Ricky to Grace’s Lucy, and Jack is Karen’s gay-larious supporting character lapdog. Another example comes from Sex and the City, in which Stanford fruitlessly tries to solve Carrie Bradshaw’s endless sex-capade follies (More like endless whining).

And finally, there’s reality TV. And by reality TV, I obviously mean the Real Housewives franchise, which features a revolving door of gay gentlemen. NYC has Brad, Atlanta has Dwight, D.C. has Paul and Beverly Hills has Cedric. They’re just given ’em  away, like Tamagotchi toys at McDonalds. It’s a fire sale, and we’re all flaming.

Behind this trend of the gay best friend we find three main points to consider. First, gay men on TV are too often tokenized as the effeminate male, always willing to help you with your hair. Tvtropes.org even has a name for these characters: pet homosexuals – gay accessories who exist to add laughs to an otherwise boring, all-straight story.

Second, having a gay friend is seen as pseudo-progressive. People want to feel like they are knowledgeable and forward-thinking, without really having to put in any of the legwork for civil rights.

And then there are the hipsters. Being cool nowadays means standing up for gay rights. Just walk in to an American Apparel Store and everyone’s trying to find a gay friend or pride flag to match that deep V and polka-dot velvet bow tie.

So we’ve gone from the gay man’s oppression to this kind of weird obsession. But how do we turn the GBF into more than a possession? First, don’t let TV and the Internet be the only places you go to learn about gay culture. Gay men are a diverse group – not all of us can be found in a Niemen Marcus.

Also, drop the competitive edge. According to Amy Astley, editor of Teen Vogue, women in particular look for gay friends to avoid competing and comparing with each other. The world is competitive enough without our friends turning on us, so don’t let your friends make you feel bad about yourself. That’s what Scarlett Johansson is for.

And finally, simply treat people like people. I don’t care what sassy joke you heard Kurt say on Glee, I’m here to tell you that I am a person. I paid $12 for this haircut, I hate the mall, and I still don’t really know if it’s pronounced ‘Ralph LAU-ren’ or ‘Ralph Lau-REN!’

In the words of Karl Marx, who coined the term commodification: “A commodity appears, at first sight, a very trivial thing, and easily understood. Its analysis shows that it is, in reality, a very queer thing.”