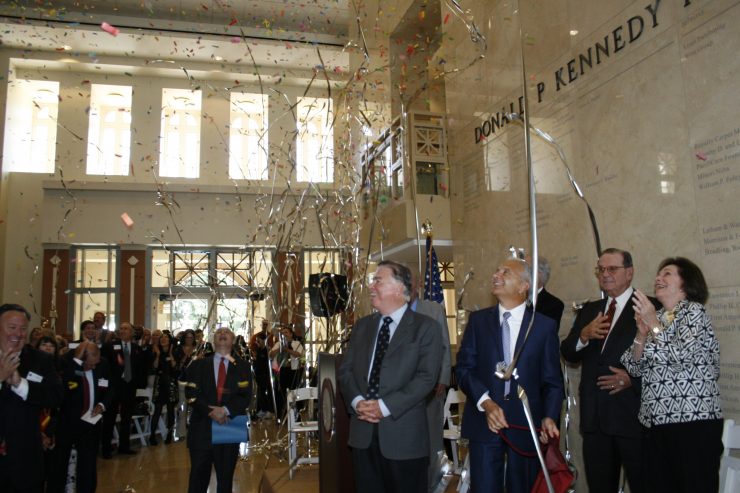 A landmark $55 million gift from Dale E. Fowler ’58 and his wife, Sarah Ann, creates “a new trajectory for our law school that will lead to real prominence,” President Doti says.

A landmark $55 million gift from Dale E. Fowler ’58 and his wife, Sarah Ann, creates “a new trajectory for our law school that will lead to real prominence,” President Doti says.

“No country is great without the rule of law, which protects individual liberties and guarantees the economic freedom necessary for entrepreneurship and commerce to flourish. A great law school will provide graduates who will excel at both. Law must be a partner in the creation of opportunity in our country and to keep our country free individually and economically.”

Dale E. Fowler ’58 jokes that he has lived all his life within three miles of Chapman University, near the creek where his grandfather started a sand and gravel business and in the shadow of the venerable high school his mother attended, which now forms the historic classroom core of his college alma mater.

“I guess I haven’t progressed very much,” he says.

But others would disagree — especially the university leaders and dignitaries, including former Secretary of State George Shultz, who gathered at Chapman University on Sept. 10 to honor the Fowler’s landmark gift of $55 million to Chapman’s law school. That bequest from Fowler and his wife of 52 years, Sarah Ann, sets a path for the school that will be profound and far-reaching, President Jim Doti said during the dedication program held in Donald P. Kennedy Hall on what Dean Tom Campbell called “the happiest day in the history of our law school.”

“(Dale and Sarah Ann Fowler) are helping to create a new trajectory for our law school that will lead to real prominence in terms of the impact it will have on legal education,” Doti said. With such a philanthropic spirit, the Fowlers join a tradition of Chapman donors who “have made a transformational impact in the lives of the graduates and in our larger society.”

In recognition, the university’s law school was formally renamed the Dale E. Fowler School of Law.

Fowler has deep ties to the campus and community. In 1912, his grandfather began a business excavating sand and gravel from nearby Santiago Creek. When Dale enrolled at Chapman, its primary buildings were comprised of the old Orange High School, where his mother had been a student. Two of the Fowlers’ three children attended Chapman — Kathryn Fowler Flattum ’88 and Jeffrey Fowler ’88 — and a granddaughter, Sarah Robblee, is a faculty member in the Department of English. Grandson Jeremy Smith is a student in the Pre-Health Post Baccalaureate Program.

Fowler grew up in Orange County, paid his way through college and made his first real estate investment before graduation. From that 10-unit Huntington Beach apartment building, he went on to build a thriving business in industrial property development, eventually expanding throughout Orange and Riverside counties.

The law school gift reflects his belief that a strong legal system is fundamental to protecting the “freedom, integrity and entrepreneurship” that have contributed to the nation’s strength and liberties, Fowler said.

In his remarks as the dedication ceremony’s keynote speaker, Shultz said that this kind of entrepreneurial attention comes at a pivotal time in U.S. history. Reflecting on the higher calling of law and its role in monitoring governments, Shultz called on the legal profession to defend the division of state and federal powers intended by the authors of the U.S. Constitution.

“Remember this division of powers. Remember the importance of the market as a way of getting things done. We’ve been drifting away from it,” said Shultz, one of the few Americans to serve in four different presidential cabinet positions.

Those ideals and values were echoed by Alex Kozinski, chief judge with the U.S. Court of Appeals for the Ninth Circuit.

“At the Dale E. Fowler School of Law, students will learn how law can be a part of wealth and not an obstacle to the economic development of society as well as a guarantor of individual liberties,” Kozinski said. “Indeed, I would say that you can’t have personal freedom without economic freedom.”

With this gift, Kozinski added, “Chapman’s Dale E. Fowler School of Law announces to the world that it is here to stay.”

Click on a thumbnail icon below to view the larger image.