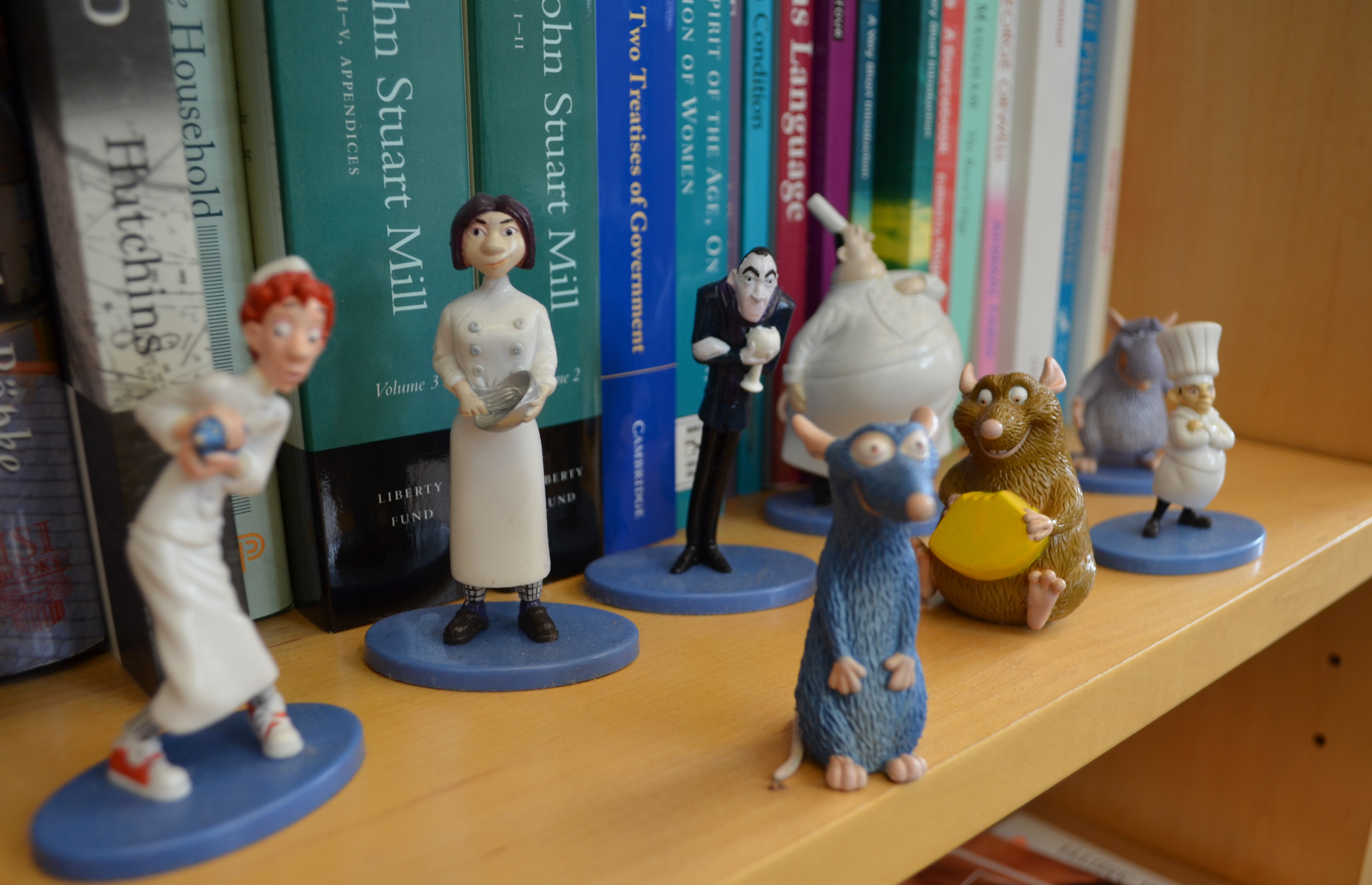 The culinary crew is all there, keeping good company with John Stuart Mill and John Locke.
Business & Economy

Office Ours: Finding whimsy and economic philosophy in Pixar’s ‘Ratatouille’

Welcome to “Office Ours”

The stories behind those trinkets, artworks and mementos in faculty offices won’t show up on their CVs. But the things they choose to collect help us see another side of their academic lives. So this week Happenings debuts Office Ours.  Let us know what you think. And send us your Office Ours suggestions at pr@chapman.edu.

He’s cute, a risk taker and a little hyperactive. He makes a sublime potato leek soup. He’s captivated by people, but an outcast from his own family. And he’s totally blue. As in blue fur. Or is it hair in the case of a rat?

Not that it really matters here because we’re talking about a mouse-sized replica of Remy the rat, that French foodie rodent made famous by the hit Pixar film Ratatouille. The plastic likeness of the cartoon rat stands on a book shelf, smack dab next to The Works of John Stuart Mill, in the Wilkinson Hall office of Bart Wilson, Ph.D., a professor and experimental economist at Chapman University’s Economic Science Institute. Few visitors to his office ask “What’s up with the rat?” Wilson says. But if they did, the answer would make sense.

“Remy is admiring of humans because they don’t just serve – they create, they make. That’s what I do as an experimental economist,” Wilson says.

The plastic Remy, along with a set of his toy-sized costars, was a gift from Wilson’s young nieces, who during a family trip to Disneyland asked their uncle which of the Pixar films was his favorite. But Wilson keeps the culinary clan around as more than a fun memento. Remy is whimsical inspiration for the economist who studies trust, risk-taking and the evolution of property laws as they relate to human economic behavior. Sometimes such work requires tinkering with the traditional ingredients. Kind of like Remy, who aspires to create magic in a Parisian restaurant despite the fact that he is, well, a rat.

Much of Wilson’s research is conducted in the ESI laboratories at Chapman, taking the form of computer games that simulate real-world scenarios. Highlighting his research are economic experiments that examine how people respond when challenged to function in a virtual world rife with dilemmas over property, trust, trade, ownership, theft and reprisals.

So the conundrum Remy faces when his thieving rat family skitters back into his world is interesting to Wilson, too. The rats justify their pillaging behavior as revenge for the traps and poisons that humans inflict on them. In the film a wild series of events results in the rats sharing the power of their numbers as reward for a young chef’s courageous defense of Remy.  They rally with their new allies, defeat a shared foe, win the heart of a food critic, and faster than you can say bon appetit, all’s well again.

It’s entertaining, but it also gets Wilson thinking. Parallels for humans? Maybe. Maybe not.

“This notion of us versus them is a constant theme I see coming up in my experiments,” Wilson says with a smile. “It’s really hard to get people out of that mentality.”

Oh, rats, you might say. But Wilson notes that he sees another interesting thread appearing in his findings. Trade tends to foster relationships and trust. Even cartoon rats – or at least their screenwriters – know that.