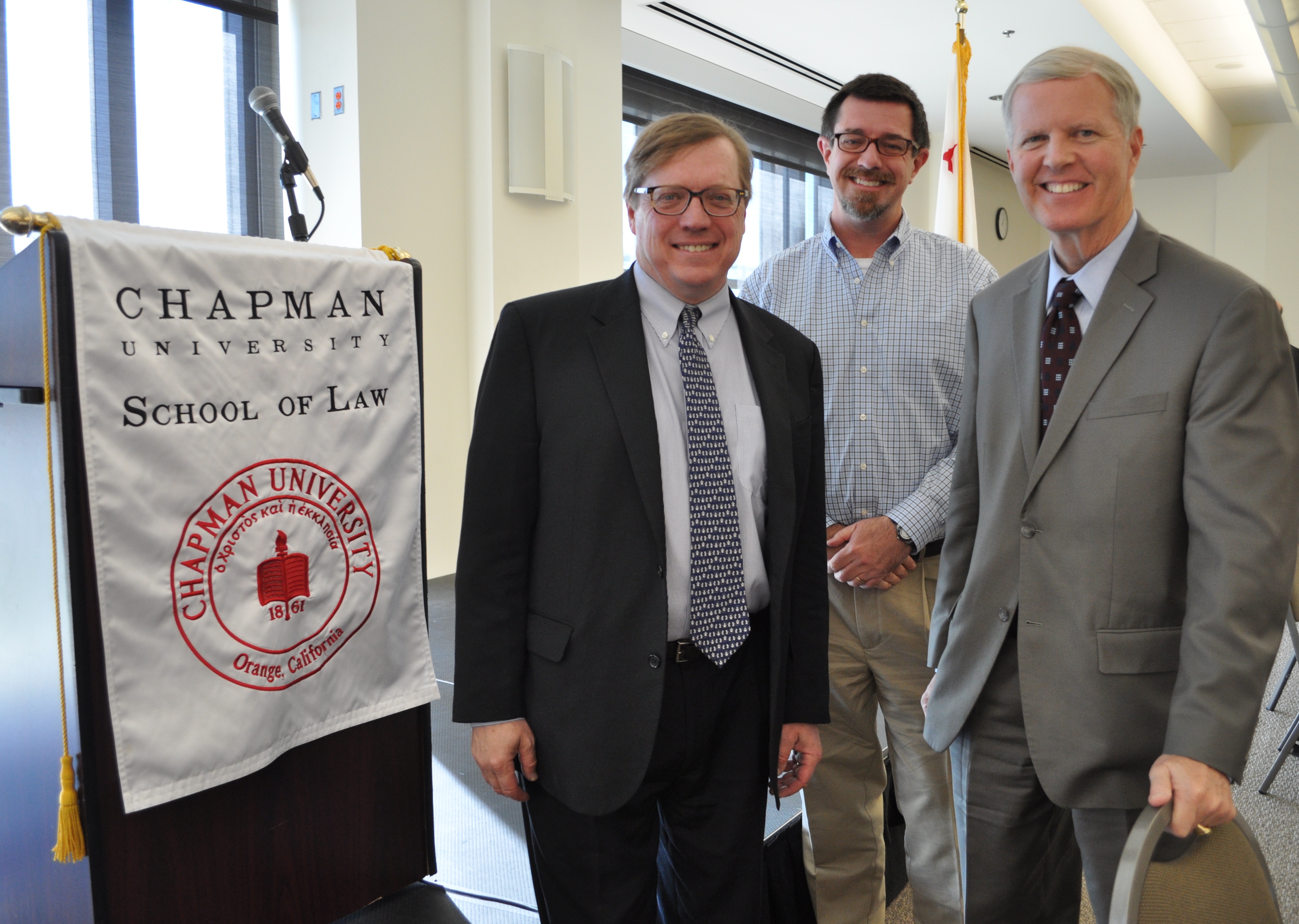 Ambassador David Scheffer, far left, is joined by John Hall, professor of law, and Tom Campbell, dean of the Chapman School of Law, during a campus visit this week.
Business & Economy

Deterrence of atrocities was never the first goal of the international law community developed in recent years, but it appears that it may be starting to have that affect, David Scheffer, the United States’ first Ambassador at Large for War Crimes Issues, said in a talk delivered at Chapman University.

Scheffer, considered the architect of the modern international tribunal court system, told faculty and students during a lunch time meeting Tuesday, Nov. 13, at the School of Law, that rendering justice for victims and perpetrators continues to be the first task of international courts.

“The question of whether international tribunals must deter further killing is a straw man, often used to actually denigrate international justice. … Such deterrence is a tremendous bonus if it occurs and we hope for it,” Scheffer said.

Now it seems at least some of those hopes are being realized. In regions where tribunals have been in effect, there is an evolving awareness of the growing strength of the international system where tyrants can be held accountable, he said.

“Nonetheless, I argue that the international tribunals have a generational impact on war-ravaged societies that ultimately impact behavior,” he said. He further predicted that the tribunals’ influence will be noticed in the Balkans, Cambodia and some areas of Africa “in decades to come.”

It was a message that resonated at Chapman Law, where several students have interned with international human rights organizations and Professor John Hall has worked with the ambassador on issues related to the Khmer Rouge Tribunal underway in Cambodia. But it is a far different world from the one Scheffer found in 1997 when former Secretary of State Madeline Albright appointed him to lead the U.S. delegation in U.N. talks establishing the International Criminal Court. International law then was largely uncodified, poorly understood and hampered by a dearth of lawyers and judges equipped to deal with investigations, hearings and prosecutions, he said. At times he arrived in countries to establish investigations and hearings while atrocities were still underway.

“I was the ambassador to hell, but also the ambassador to hell and back. In my more optimistic moments I thought of myself as a carpenter of war crimes tribunals,” he told the audience, which included law students as well as undergraduates from the political science and peace studies programs.

Today there is a rich “legal reservoir” of international law experts and lawyers and a growing body of countries interested in supporting the U.N. International Security Council’s efforts on behalf of human rights. He said his greatest hope is that that trend will grow in the United States and that in its new session Congress will resurrect and pass Senator Dick Durbin’s proposed Crimes Against Humanity and Accountability Act.

Scheffer’s visit was part of the School of Law’s Chapman Dialogue Series.