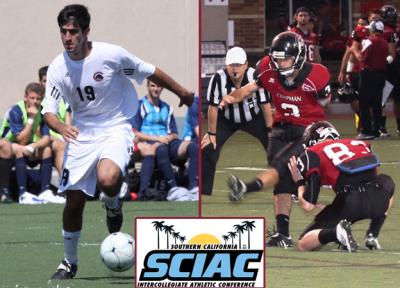 For three seasons, senior Mauricio Alfonso has made an impact on both the soccer and football fields. This week his efforts for both teams have been recognized by being named SCIAC Athlete of the Week for the week of Sept. 3-9. This is the fourth time a Chapman athlete has been recognized for
SCIAC
Athlete of the Week since Chapman entered the conference and second time that a men’s soccer/football player has earned the award, the other being Jimmy Adranly.

On Saturday, Alfonso helped the football team to a 55-35 season-opening win over the University of Puget Sound by kicking field goals of 35 and 40 yards, and he also connected on all six of his PATs. With two field goals against Puget Sound, he tied the career record of 18 set by Bill Hamlin who played from 1994-96. He also has now connected on 53-straight PATs which is also a school record.

Less than 12 hours after the football team’s win, Alfonso scored two goals including the game-winner in the men’s soccer team’s 3-2 win over Whitman College. Read more at the
Athletics website
.