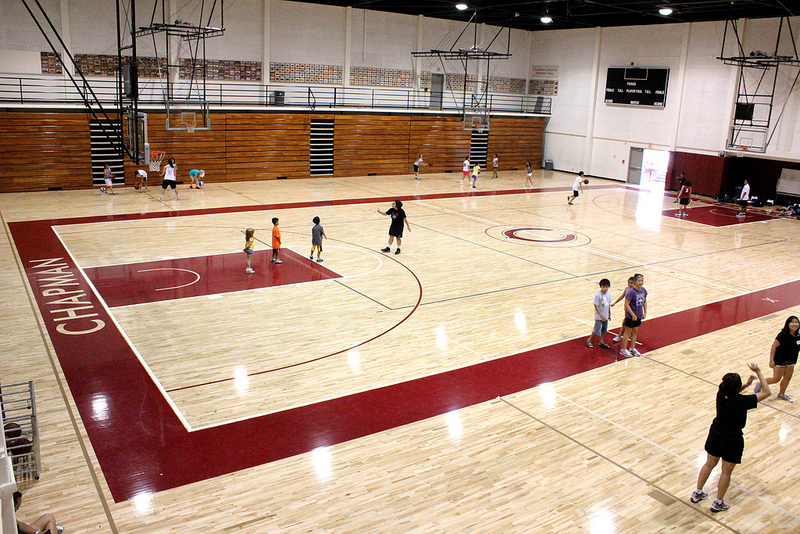 Athletes who compete in the Harold Hutton Sports Center gym will have less sun in their eyes and more spring in their steps, thanks to a major refurbishing of the facility completed this summer.

The restoration included the installation of a state-of-the-art maple floor and replacement of the large bank of windows at the top of the gym with insulated blacked-out glass. Both upgrades were essential because the original 1978 floor had aged and was riddled with so-called “dead spots,” and sunlight slanting through the old clerestory windows often distracted players and taxed the air -conditioning system, said Rick Turner, director Facilities Management Services, who supervised the project.

In addition, the interior was repainted and the old orange wall padding behind the center court backboards was replaced in Chapman crimson and extended several more feet along the wall. But the jewel of the $350,000 project is the floor, Turner said. The center court sidelines are framed in crimson, and offset practice court lines were painted in a subtle tan.

“I love the wood. I think the wood is beautiful, and the finish and colors are much more collegiate,” he said.

The new floor was manufactured by Robbins Sports Surface, the same company that makes competition floors for many top NBA facilities and NCAA tournament sites. The floor is set atop a combination of state-of-the art sub-flooring and padding.

All the work was completed in a six-week period after the University’s spring sports season concluded and before summer youth camps commenced and well before next week’s Opening Convocation, Wednesday, Aug. 22. But another big test will soon follow when the men’s basketball team begins pre-season play. Head men’s basketball coach Mike Bokosky said the new floor is terrific.

“The floor has good spring in it, it has good balance,” he said.

Maybe lots of wins in it, too?

“I hope so,” he said. “The floor  doesn’t get the wins though, the players do.”
basketball buildings chapman university flooring gym