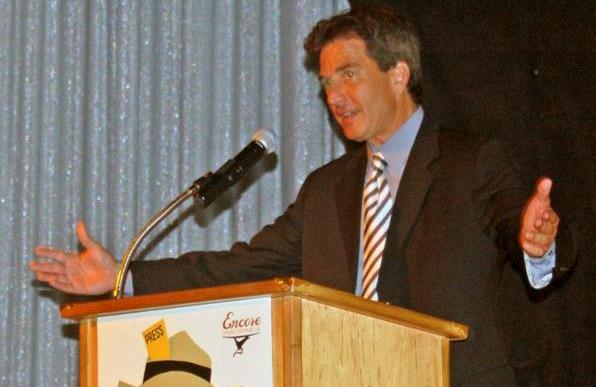 The Orange County Press Club awarded its 2012 Sky Dunlap Award to Pete Weitzner, associate professor and director of broadcast journalism at Chapman University’s Dodge College of Film and Media Arts, in recognition of his longstanding contributions to Orange County journalism.

The award is the club’s highest honor, named for a tall Orange County journalist (thus the “Sky” nickname) who volunteered his time to teach students and encourage civic engagement. Weitzner accepted the award during the annual gala held July 18 at the Encore Dinner Theatre & Club in Tustin.

“This award means a lot for two reasons,” Weitzner said. “It reinforces what I was counseled to do by some good people over the years, and have tried to put into practice–that helping others is the greatest reward in this career…and in life. And receiving this Sky Dunlap from some of the people I most respect in Orange County journalism, people I’ve known over two decades, is also very affirming.”

In addition to teaching at Dodge College, Weitzner is the business anchor for PBS SoCal’s “Real Orange” show, and host and producer of “The Chapman Business Report.”