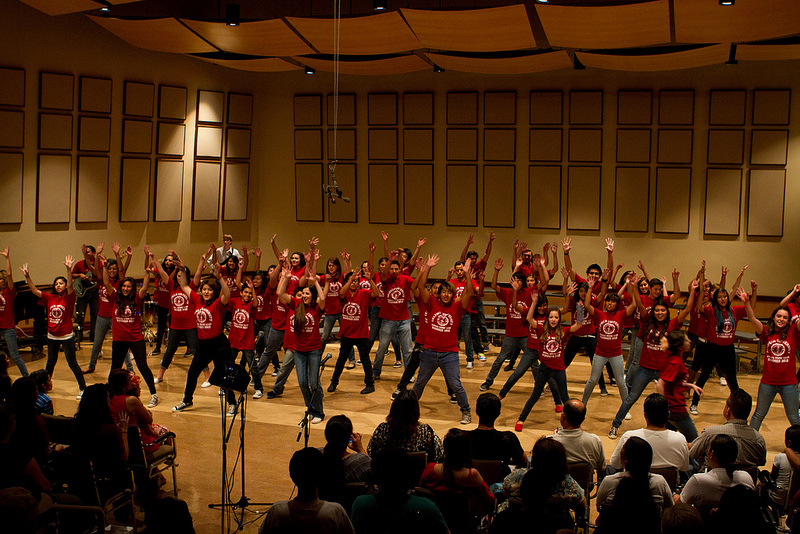 When local teenagers sashayed onto a stage in Salmon Recital Hall, singing a lively Swahili song under the direction of an especially animated director, the energy level grew. And grew some more.

Whoa, said Stephen Coker, D.M.A., associate professor and director of choral activities at Chapman University. Dial it down a bit.

“If you shimmy that much you’re going to call too much attention to yourself,” Coker teased, wiggling his shoulders and earning a laugh from his young chorus.

Such exuberance and fun were all part of the learning experience during the inaugural summer Choral Music Camp offered by Chapman’s Conservatory of Music. Under the direction of camp director Angel M. Vázquez-Ramos, Ph.D., assistant professor, the camp immersed 57 local students in a weeklong course of intense music education that culminated with a free concert June 29.

“It’s been amazing,” said Jesse Luna, who will be a junior this fall at Orange High School, where he was a choir member his sophomore year under the direction of Chapman alumnus Michael Short ’79 , choral music director at Orange High. “I love the way Dr. Coker directs. He gets so involved with his singers.”

Chapman faculty and student counselors directed the teens into three main choirs – mixed, women and men – and several small ensembles. And because voices need rest, the week was peppered with games, a movie night and multiple elective options, ranging from “Acting for Singers” to “Swing Dancing.” The result was a week’s worth of happy sounds literally filling Oliphant Hall.

“This has brought new life to our school in the summer,” Vázquez-Ramos said.

Vázquez-Ramos said the goal of the camp was to both instill a love of choral music in the next generation of college students and connect with the community. More than 60 percent of students in attendance received partial or full scholarship assistance, thanks to support from university donors, Vázquez-Ramos said.