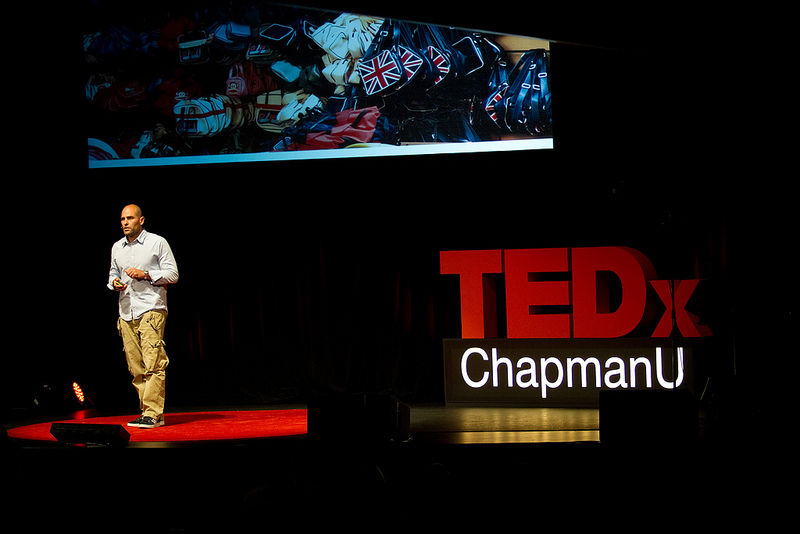 Chapman University graduate student Chris Ramirez (MBA/FTV) has long been an online fan of TED and its partner TEDx conferences, famous for their 18-minute talks about “ideas worth spreading.” Like TED fans around the world he loves tuning into YouTube to watch leading thinkers talk about everything from street skating to satellite technology.

But to join a TEDx event live was something else altogether. So even though it was a balmy summer afternoon and he still had a full evening of night classes ahead, Ramirez happily spent several hours inside Memorial Hall attending the inaugural TEDxChapmanU.

“I couldn’t be more excited,” said Ramirez, who was among the hundreds of Orange County residents, business leaders and students who poured into Memorial Hall Friday, June 15, for TEDxChapmanU, while thousands more watched live streaming. “But actually being here at an event and being able to say hi to a lot of the people here and bounce ideas off and really stir up discussion about what’s been said has just been an invaluable opportunity.”

With “Icons, Geniuses & Mavericks” for its theme, organizers of the event assembled a roster of speakers who represented some of Chapman’s leading faculty and alumni, and top Orange County’s innovators. In their own way, each speaker inspired the audience to leave the event ready to spread their own stories and ideas and embrace maverick moments, regardless if they seem like wild dreams. Even the musicians who performed during the breaks had impressive stories that reflected forge-ahead thinking. Virtual Boy, a band founded by Henry Allen ’11 and Preston Walker ’11, records with Alpha Pup Records, a hot house of young electronic artists delivering a new genre of music that the Los Angeles Times called “the most exciting sounds on the planet.”

Among the presenters was Shelene Bryan, founder of skip1.org, a nonprofit that dishes up bite-sized giving opportunities by challenging people to skip treats like lattes or manicures and make small donations that can save the life of a Third World family or child.

“I had a lot of people tell me you’re not going to be able to start a charity to do that. Well, I did. Because I love when people say no. I don’t even hear it,” Bryan said.

Indeed, forging ahead with new or bold ideas was a thematic thread throughout the presentations. Speaker Yossie Hollander, co-founder of Fuel Freedom Foundation, captured the audience’s attention with a talk detailing how the development of alternative fuels could transform the energy market.

“You may not have heard about methanol. Methanol is a liquid fuel made from natural gas, any carbon, actually even from garbage. And we are the Saudi Arabia of garbage,” Hollander said, eliciting a round of laughter from the audience.

Created in the spirit of TED’s mission, “ideas worth spreading,” programs like TEDxChapmanU are designed to give communities, organizations and individuals the opportunity to stimulate dialogue through local and independently organized events. A highlights reel and videos of all the talks will be posted soon at TEDxChapmanU. And the conversation continues at TEDxChapmanU Facebook page, and on Twitter at #TEDxChapmanU.