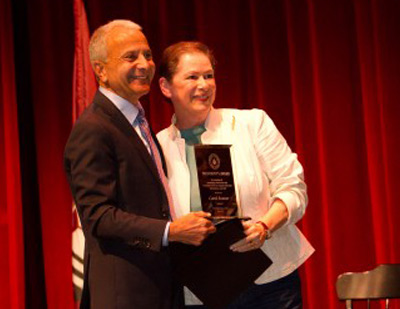 Chapman University’s Staff Summit started with Monday morning bagels and kept rolling along through the week, with a full schedule of professional workshops on everything from Excel spreadsheets to social media strategies. Staff revved up with introductory sessions on yoga, meditation, Zumba and kickboxing. And, naturally, the traditional gelato party, was not to be missed.

Capping off the week was the Staff Appreciation Brunch and Awards Ceremony, where Carol Bonner, assistant vice president of advancement operations for University Advancement, was presented with the President’s Award, the University’s highest staff honor. The award is given each year to the staff person who most exemplifies the spirit of Chapman University and demonstrates exemplary job performance and superior interpersonal skills.

Among the accolades listed in her nomination, which was submitted by her entire staff, was Bonner’s unwavering patience and professionalism. She “leads by example and is a tremendous ambassador for Chapman University,” they wrote.

Also nominated for the award this year were:


Also presented at the ceremony was the 2012 Chancellor’s Grant and Award, which went to Laura Baker, from the Office of the Chancellor. First runner-up was Molly Morin from Academic Advising.

Receiving the inaugural Four Pillars Award was Lt. Craig Lee from the Department of Public Safety.

To see videos and photos from the week, visit the
Staff Summit
media site.