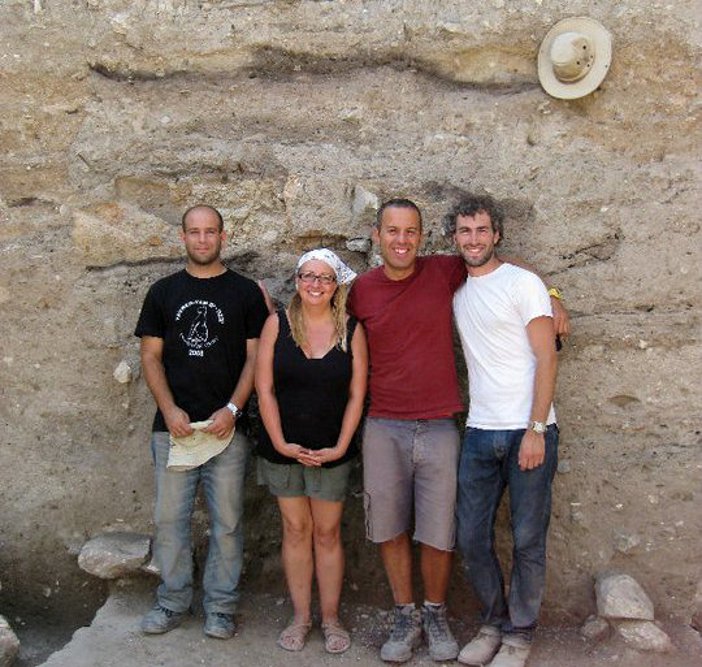 Dr. Julye Bidmead with her fellow supervisors in Area H of Tel Megiddo, where an unusual stash of jewelry was found. (Photo courtesy of Dr. Bidmead)
Arts & Film

About 3,100 years ago somebody stuffed a hoard of gold jewelry, beads and a single earring adorned with tiny animal images into a nest of three clay pots — including a beer strainer – seemingly in hopes that no one would find the treasure in a dusty corner of ancient Canaan.

But in 2010 someone did find it. At the renowned Tel Megiddo excavation site in modern Israel, where Chapman University’s Julye Bidmead, Ph.D., assistant professor, returns each summer to help supervise the excavation of this hot bed of history, researchers found the secret stash. Archaeologists with
The Megiddo Expedition
are just now releasing
the news
, after extensive tests and study of
the artifacts
, which included gold, silver and bronze jewelry and hundreds of beads crafted from semi-precious stones. The find was made in the dig area Bidmead helps supervise and she is elated, but not because of the glitz of the ancient bling.

“The actual find tells us that we are in a very wealthy area. And in wealthy areas they tend to be close to palaces and archives, and the most important thing an archaeologist could find is a text, a tablet, a writing. That means we’re getting close to the archives,” she says. “It’s an indication that we’re close to finding some big discovery.”

But it’s an indication, not an assurance, she says. Despite the fun of the newsy find, she returns to her summer research with her guiding rule – take no set notions about what might be unearthed in history’s dust.

“I always go with absolutely no preconceived ideas about what we’ll find. I usually get surprised beyond belief,” Bidmead said, speaking by phone from her home, where she was grading finals-week papers and packing her bags.

Megiddo, a UNESCO World Heritage Site, is a multi-period archaeological dig with 27 layers of civilization from about 3500 BCE to 100 C.E.  Rich with biblical history, Megiddo, referred to as the place of “Armageddon” in the New Testament, also served as the background for James Michener’s bestseller
The Source
. Archaeological excavations there began in the early 20th century and are led today by the Institute of Archaeology of Tel Aviv, with collaboration from a consortium of several American universities, including
Chapman
,
George Washington
,
Vanderbilt
and
Loyola Marymount
.

It has a rich history of significant finds, including the famous
Megiddo Ivories
. Bidmead, who works as a field archaeologist and registrar for the expedition, has been an integral part of the Megiddo staff since 1996 and has found gold artifacts there before. But it’s a vessel of lentils she uncovered that she still considers a prime find.

“It contained hundreds and hundreds of lentil seeds. Now that’s not as exciting as gold, but lentil seeds are something we can do good carbon dating on. But of course the gold is going to make all the news. For myself, personally, the lentils are exciting,” Bidmead says with a laugh. “That tells me so much about what they ate, how they cooked.”

Fortunately, the latest cache also comes with opportunities for carbon-14 dating. When researchers first found the trio of clay vessels toward the end of the 2010 season, the jewelry wasn’t apparent because the innermost vessel was packed with compressed dirt. It was sent to a lab for analysis and then returned to the archaeologists. Only then did they empty the vessel and see the ancient valuables, wrapped in a linen cloth, which is undergoing additional carbon-14 dating.

But the collection of jewelry is intriguing, Bidmead said. It includes eight gold earrings in a crescent shape commonly found throughout Israel, a gold seal ring with a fish carved into it, hundreds of tiny beads and the lone unique basket-shaped earring adorned with animals, which suggests Egyptian influence. As a scholar of gender studies and biblical archaeology, the religious studies professor is especially interested in what the jewelry conveys about the lives of ancient women.

“Here we get a glimpse into their life and luxury items, and we can see that they weren’t much different than we are,” she says.

Indeed, could it be that the nuisance of losing a favorite earring is a problem that has vexed women through the ages? Is the missing earring nearby or intentionally separated? Hard to know, says Bidmead. It could have been made as a solo adornment and no partner exists. Or maybe not.