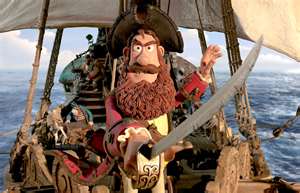 See all his plundering shenanigans in 3D at the preview screening.
Arts & Film

Avast, ye fans of 3D: ‘The Pirates! Band of Misfits’ to screen at Folino Theater

Time to get your “Arrrgh!” on all ye mateys. A sneak-peek screening of the new Sony Pictures movie
The Pirates! Band of Misfits in 3D
will be held at 7 p.m.Wednesday, April 18, in the Folino Theater at Marion Knott Studios.

Doors open at 6:45 p.m. and security will be present to check for cell phones and other recording devices to foil any plundering of the preview before the movie officially opens begins April 27. Admission is free, but RSVPs are required and may be
completed online
.

From the makers of
Chicken Run
,
Pirates
tells the tale of Pirate Captain – a boundlessly enthusiastic, if somewhat hapless, terror of the High Seas – who has one dream: to beat his bitter pirate rivals in the much coveted Pirate Of The Year Award. It  stars
Hugh Grant
,
Salma Hayek
and
Jeremy Piven
and is directed by
Peter Lord
,
Jeff Newitt
and written by
Gideon Defoe
.