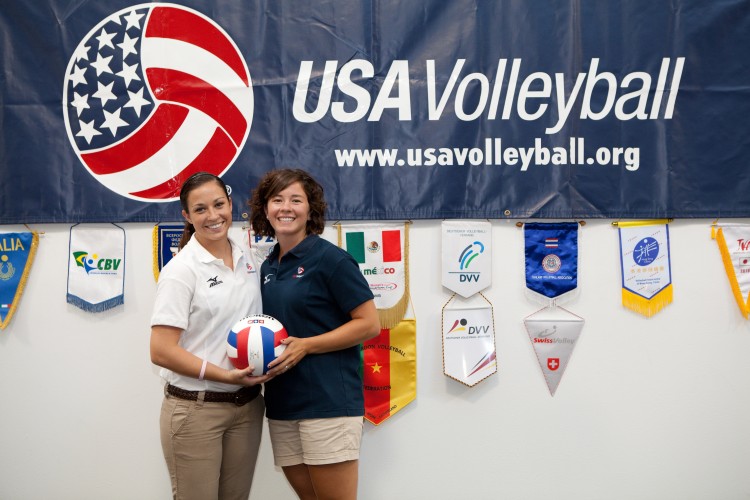 Interns working with USA Volleyball enjoy their own golden moments

How can unpaid interns possibly help bring home the gold?

By working as athletic training interns with USA Volleyball’s Men’s National Team, which won the gold medal at the 2008 Olympics, that’s how.

Now USA Volleyball is building the squad it hopes to qualify for the 2012 Olympics. So the ankles, knees and wrists that Chapman University athletic training undergraduates Brittany Bergens ’13 and Alicia Tate ’13 and new alumna Katy Carter ’11 helped ice and tape this summer just might be on the court in London next summer.

“It’s a great experience working with these kinds of athletes,” says Tate, of Placentia, Calif.

The students performed their internships at USA Volleyball’s cavernous warehouse of a training facility in Orange County, the American Sports Centers in Anaheim, just a few miles from Chapman’s campus. They were assigned some intern-type chores – refilling ice bags, stocking supplies and folding towels. But mostly they worked one-on-one with athletes. The team’s certified athletic trainers create a program of exercises and stretches to help an athlete work through an injury, and the interns were often in charge of putting the athlete through his paces.

“You really have to be confident about what you’re doing. They’ve been treated by the best of the best,” says Bergens, of Ridgecrest, Calif.

Working with some of those top athletic trainers was also a bonus. Bergens says it was particularly interesting to see the different approaches of several professionals.

“My favorite part was working with three different athletic trainers and how they each go about something differently but they all have the same end goals. Seeing how they all do it, how they all get there, was kind of like learning their different thinking patterns,” Bergen says.

Such experiences are a key component of the Athletic Training Educational Program at Chapman, which requires students to participate in clinical rotations or internships each semester, says Jason Bennett, associate professor and program director. Southern California is loaded with summer opportunities for students, from programs like USA Volleyball to the county’s professional sports teams, The Los Angeles Angels of Anaheim and the Anaheim Ducks.

There’s nothing to compare with the experience of testing your skills in the fast-paced world of professional sports, says Carter, of Irvine.

“It was a wonderful foot in the door and it was just amazing,” says Carter, who was recently hired as an athletic trainer at Vanguard University.

And there’s always the fun of learning a new sport. While all three women were accomplished high school athletes, none had played volleyball, and all were relatively unfamiliar with the sport until their summer assignments. Now they know plenty, and come next summer, they’ll be especially focused on the athletes of Team USA Volleyball.

“It was amazing to see what these athletes can do. I have a whole new respect for volleyball,” Carter says. “I’ll be watching them very closely.”