Thieves have stolen the bronze busts of President Ronald Reagan and George P. Shultz, the late president’s former U.S. secretary of state, from their pedestals on the Chapman University campus.

“It’s hard to figure out if these two busts were taken because someone is a Reagan and Shultz fan and wanted them for his or her personal pantheon, or whether they weren’t a fan and for some reason didn’t want them displayed on campus,” said Randy Burba, chief of campus Public Safety.  “It’s just a real shame that anyone would steal from a university where these sculptures are out in the open for everyone to enjoy.

“There is always the possibility they were stolen to be re-sold as scrap metal.  However they were located in the middle of the campus in a high-traffic and patrolled area, which would lead us to believe these particular busts were targeted.”

Public Safety officials said that it appeared the busts, which were located on a walkway between the university’s Fish Interfaith Center and Hutton Sports Center,  were taken in the early morning hours of Saturday, Aug. 6.  The thieves unbolted the Reagan bust from the marble top of its pedestal, leaving four empty bolt holes.  Apparently unable to unbolt the Shultz bust, they dislodged the marble top of that pedestal and carried the entire assemblage away.

Since 1994, Chapman has maintained a tradition of honoring endowed chair gifts with this unique method of donor recognition.  When an individual, family or organization funds an endowed chair (a permanently endowed faculty position), they select a renowned figure representing the field of study supported by their gift.  Another private donor – usually a friend of the chair donor – pays for the creation and casting of the bust.

The Reagan bust was dedicated in 2007 to recognize the Edgar and Elizabeth Pankey Chair in Media Arts, and was sculpted by Miriam Baker.  The George P. Shultz bust was dedicated in 2010 in honor of the Donald Bren Distinguished Chair in Business and Economics, and was sculpted by Bruce Wolfe.   Both busts are slightly larger than life-size and weigh more than 30 pounds each.

Chapman’s Public Safety office has issued alerts to all metal-recycling businesses in the area, and is monitoring eBay and other auction sites.  Anyone with knowledge of the whereabouts of the busts is asked to call Chapman Public Safety at 714-997-6763. 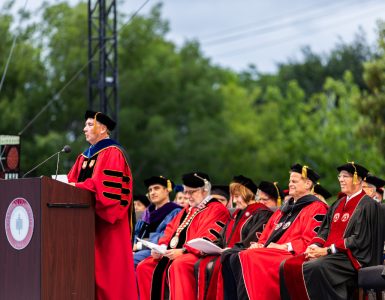