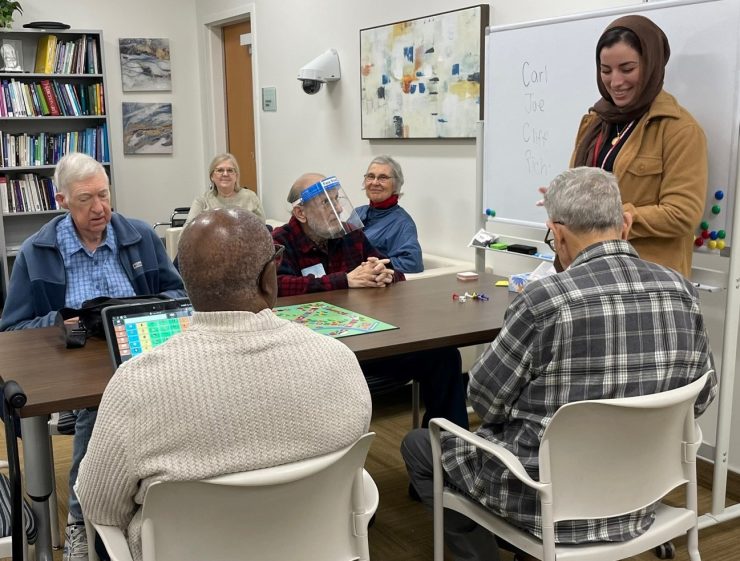 Four men play a board game, joking and cheering each other on. They compete to name a fruit, an animal, a sport.

The lightheartedness of their interactions contrasts with the reason they’re friends – they each have aphasia.

Aphasia – loss of ability to understand or express speech and language, caused by brain damage – has been in the news recently because it affects actor Bruce Willis. Unlike Willis, the men in the group had limited resources to deal with their stroke-caused aphasia.

The stroke support group helps participants get comfortable communicating with a special device and gives them a place to interact socially while challenging them to communicate.

“They were so wrong,” Robin says. “It was a true blessing finding this program as he has improved so much since that time with the wonderful students and staff at Chapman. This program gets him out of the house and allows him to interact with others with aphasia.

“If not for this program, he likely would not speak much at all.”

When Mission Viejo resident Richard Purdy had a stroke 10 years ago, Chapman was the only place his wife Patricia knew of in Orange County that offered free speech therapy. Richard is now a regular member of the group.

“We have people here who would never get therapy if they didn’t come here, because they don’t have insurance for it,” says Clinical Assistant Professor Lisa Lachance, who oversees the Adult Learning Lab. “And so I get a little soft spot in my heart for that reason.”

For a time during the COVID-19 pandemic, the group couldn’t meet in person.

“When we came back after COVID, it was all hugs and when it’s somebody new, it’s like this big welcome wagon,” Lachance says. “Meeting has just been so important because these people were so isolated.”

That isolation can extend back to when a stroke occurs. Strokes affecting the left side of the brain cause language problems.

Speech therapists evaluate a person recovering from a stroke, then work on speaking, writing, and hearing and reading comprehension if the stroke affected their brain’s left hemisphere.

“We do different activities helping them to be able to find the words so they know what they want to say if they can’t get the word out,” Lachance says.

In the group, learning lab supervisors and students teach people to use a tablet device programmed by a company called Lingraphica. Tablets can be customized with photos and names of people the person knows. Medicare pays for the devices.

“He’s learned quite a bit about using the device,” says Orange resident Toni Colombo, whose husband, Joe, has attended the group for a year and a half. “He’s become more attentive – he watches everyone and it has helped people other than family members communicate with him.”

Much of that progress is because of the graduate students who run the group as part of their clinical training.

Sarah Nabhani (MS ’23), who ran the group with another student in the fall semester, says she has gotten to work with a variety of people.

“Each of the participants are so different, yet collide for one main objective – communication,” she says. “All the clients are very understanding that we are students and are all so grateful to be receiving services.”

Before working in the learning lab, she didn’t know which populations she wanted to work with.

“After Adult Learning Lab and this group, I fell for the adult population,” she says.

Robin Massingale said her husband Cliff has benefited from the combination of the in-person group and from another Chapman speech therapy group, which is virtual.

“Since he started with those sessions in 2020, his speech has improved considerably,” she says. “Now, he sometimes surprises me and speaks in almost a full sentence, and he will try to speak with family members even if he struggles a bit to find the right words.”

Beyond the therapeutic benefits, the group “gives everyone a way to have fun and to laugh,” Patricia Purdy says.

Lachance likes to tell the story of Joe Colombo practicing his speech for his daughter’s wedding.

“He stood up there so proudly and everyone in the place was crying,” Lachance says. “They recorded it and we watched it – we were all crying. Speech therapy gave him the confidence to stand up there and do that.”