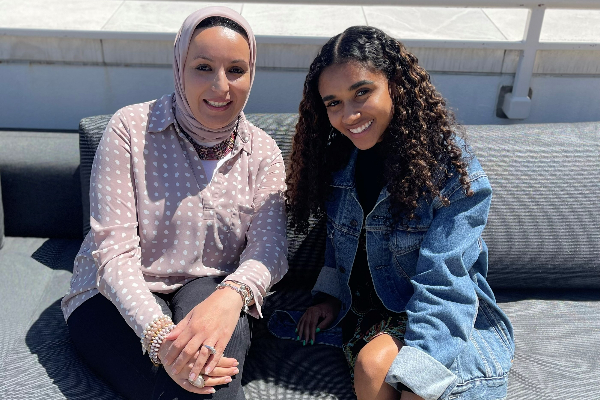 Throughout my library career as a student, I curated a myriad of displays highlighting different topics such as Black History Month, different cultural and religious holidays, and most recently a display commemorating the brand-new American Women quarters program.

For my senior year project, my mentor, Leatherby Libraries Coordinator of Diversity Initiatives Essraa Nawar, tasked me to curate a display raising awareness about disabilities. This topic felt right, and I decided to focus on invisible disabilities.

Since I was nine years old, I’ve dealt with chronic illness, and my health issues have only progressed. At Chapman, I was diagnosed with two more chronic conditions leaving me with three types of invisible disabilities. Oddly enough, the symptoms of my disease, my altered lifestyle and regular doctor’s appointments did not stop me from pursuing my academic and extracurricular activities.

Throughout my four years at Chapman, I participated in programs such as Chapman Ambassadors, Disciples on Campus and Kappa Alpha Theta. Additionally, I’ve held positions such as the first diversity, equity and inclusion chair of my sorority, a Greek Life Rho Gamma and a member of diversity, equity and inclusion committees relating to on-campus Greek life. I’ve been in university productions such as Chapman Celebrates, Home Unchained: A Night of Devised Theatre, and many Dodge College film, television, and thesis productions. In the summer of 2019, I traveled to Greece for a travel course with Dodge College. I was a part of two short film productions and had the opportunity to spend a month engrossed in Greek culture.

When my health started to decline drastically, my mom asked if I wanted to take a break from school, but I didn’t want to. I wanted to keep going as planned because I felt that putting my life on pause would stop my motivation to get through it. I didn’t want to stop and feel the illness take over my life. Luckily, this was during the time of Zoom school. It’s possible I wouldn’t have been able to do this in person, so that was one positive I got out of our world shutting down due to COVID-19. Nobody would have known then, at my worst, that I was sick. At first glance, they wouldn’t know I could no longer do regular day-to-day activities. Even now, they wouldn’t know.

Students, faculty and staff all relate to disabilities in their lives. Whether it be a family member or a friend, it’s impossible to know someone who doesn’t have a disability. It may be invisible or well managed, but it exists. On my behalf, I can say the disability services at Chapman have been very supportive. I cannot express the amount of love I’ve received from Chapman while balancing my health and academics. I have had the most supportive professors who have extended themselves above and beyond to ensure I have the learning experience I want. The Interfaith Center women, including Nancy Brink, Cisa Payuyo and Kari Kempf, kept me grounded throughout my ups and downs. Most importantly, I received generous support from my mentor, Essraa Nawar, at Leatherby Libraries. And don’t think I’m missing fantastic friends; I have had my best friends cheering me on and riding this wave with me. On top of this, I’ve had extraordinary parents giving me the wind beneath my wings. I have had a village of people supporting me throughout my time at Chapman, and I don’t know what I would have done without them.

As I move into a new chapter of life post-graduation, I am excited to move forward with the supportive, loving and generous friends I made at Chapman. I know I will continue to have some bumps in the road during my health journey, but I have the confidence and the people around me to get through it.

“Anything is possible when you have the right people there to support you.” – Misty Copeland.