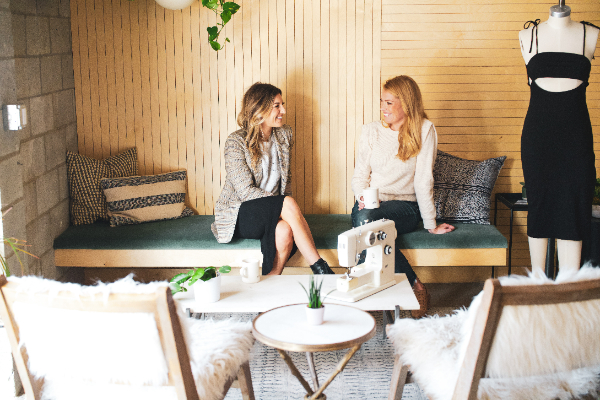 Brodie That Dood is a goldendoodle with 780,000 followers on Instagram. His “dude” takes the large, fluffy dog everywhere, making him a “petfluencer.”

Early next year, he is launching his own pet gear brand – dog backpacks, dog goggles and other “pet parent products.”

That merchandise is being made through Thread Vision, a company co-founded by Kirsten Murphy ’10.

Murphy and LaMonda met while working at clothing company BB Dakota, where Murphy got a job after graduating. Murphy worked her way up from customer service to production management.

“That was pretty much my only job outside of college. But luckily I got a ton of experience working in different positions while I was there, which was awesome,” Murphy recently told a class at Argyros School of Business and Economics.

“Whitney and I got together one night after work and we were tossing around some ideas,” Murphy said. “My husband had mentioned to me an idea he had about helping out YouTubers – these guys all have merch. And he’s like, ‘They’re doing all this stuff themselves. That’s crazy – they should be out creating content, traveling, doing all the stuff they need to do to keep their channel going, not having to ship out T-shirts to all of us.’”

Murphy and LaMonda came around to the idea, thinking they could use their knowledge of customizing products and connections to vendors around the world.

“So we thought, why don’t we use our network and just start reaching out to anyone and everyone we know who might want to make a product and see if it sticks?” Murphy said. “And we’ve had an amazing response from people. There’s tons of people who are looking to make something custom rather than just do a collaboration, which is very common with influencers.”

The two formed an LLC, made a business plan, came up with the name “Thread Vision” and made a website. They kept networking and handed out their business cards at places like trade shows.

“That’s one thing we wanted to impart on you guys – networking,” Murphy told the class. “I used to roll my eyes at the word. But now, honing our business, it’s like, who do we know who can help us with this?”

Thread Vision offers design, sourcing, manufacturing and fulfillment for apparel, accessories, shoes, fitness gear and other merchandise. Each potential client – called a “visionary” – gets a custom proposal. A graphic designer creates the look they want, then the product is sourced and sampled.

“Once they approve it, then we’ll order it with the factory. We’ll get it here into our warehouse, and then we link up our shipping system to their selling platform,” Murphy said.

A year in, they have about 20 clients, including exercise influencers, apparel brands and artists.

Murphy recalled an interaction she had with a coworker who had been at BB Dakota almost as long as she had.

“She looked at me and said, ‘This is the best thing that’s ever going to happen to you,’” she said.

Murphy said that her time at Chapman was key to preparing her for the working world.

“I felt confident stepping straight from college to a corporate setting,” she said. “Chapman taught me professionalism, how to best communicate and it also connected me to lifelong friends who have been so supportive throughout the years.”

Murphy and LaMonda will speak to management, marketing and entrepreneurship classes at Argyros during the 2022-2023 academic year.