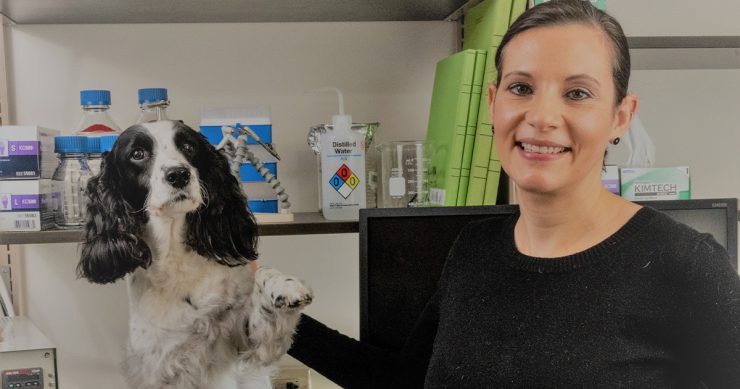 The beginning of Lauryn DeGreeff’s career in forensic science took her into the heart of true crime with the infamous 2011 trial of Casey Anthony, who was charged with murdering her 2-year-old daughter.

Since then, DeGreeff ’06 has worked largely behind the scenes in the specialty field of canine detection, aiding those who train dogs to sniff out human scents and other odors that help law enforcement and military officials unravel mysteries.

DeGreeff, a Chapman University chemistry graduate, is now an associate professor of chemistry at Florida International University. She continues to focus her research on “what we can learn about odors to improve dogs’ detection,” she says.

For more than a decade, DeGreeff has sought to make it safer and more effective for dogs to find odors that assist the crime-solving efforts of the FBI, U.S. Navy and other agencies.

But even with all her professional achievements, attending Chapman remains one of her most rewarding experiences.

“I’m very thankful to Chapman for launching the rest of my career,” she says. “The professors were very supportive.”

DeGreeff, who became interested in forensic science while studying anthropology at New York University, enrolled in Chapman to get a chemistry degree after graduating from NYU. Christopher Kim, associate dean of academic programs at Chapman’s Schmid College of Science and Technology, recalls DeGreeff as a foundational member of his environmental geochemistry research lab when he started at the university.

“Back then, she impressed me with both her aptitude and curiosity for independent research as well as her commitment to forensic science,” he says. “It’s been incredibly rewarding to watch her personal and career progression over the years and to now consider her a colleague in academia.”

DeGreeff got a bachelor’s in chemistry in two years at Chapman. She was given a special award so she could be included in the honors awards ceremony.

“When I graduated from Chapman, I felt like I had direction. I felt like I knew what I really liked, and I had a community,” she says.

DeGreeff earned her Ph.D. and did a post-doctoral fellowship in the FBI’s Counterterrorism and Forensic Science Research Unit, then worked for a decade in the Naval Research Laboratory.

She was drawn to canine detection when a professor talked about it as she started graduate school.

“I never knew canine detection was a forensic discipline. I thought it was very interesting so I jumped on it, joined the research group. I loved it so much that I never left the field,” she says.

She started in forensic science by studying the chemistry of how dogs detect the scent of humans – living and deceased – and their blood. She went on to research how dogs alert to other scents important to investigators, like homemade explosives, fentanyl, marijuana and spilled crude oil.

In addition, DeGreeff investigates factors, such as contamination, that affect the quality of canine detection training aids, as well as how to make dog training safer and more authentic. At the Naval Research Lab, she invented a device that trains dogs to detect mixed odors found in homemade explosives.

Ideally, dogs are trained in the environments they work in. But with homemade explosives, this could pose a hazard. She created the device “because you want the explosive training aid to smell like the real explosive, but not have the hazard of the real explosive,” she says.

DeGreeff also mentors Ph.D. students and is collaborating on a project examining the movement of odor vapor inside of a dog’s nose with Chapman Assistant Professor of Biological Sciences Lindsay Waldrop.

“That made me really happy, to be able to write ‘Chapman University’ on paperwork I’m filling out,” she says.

Ultimately, DeGreeff is driven to apply her scientific expertise in ways that have real-world impact.

“I like to see it help someone,” she says.