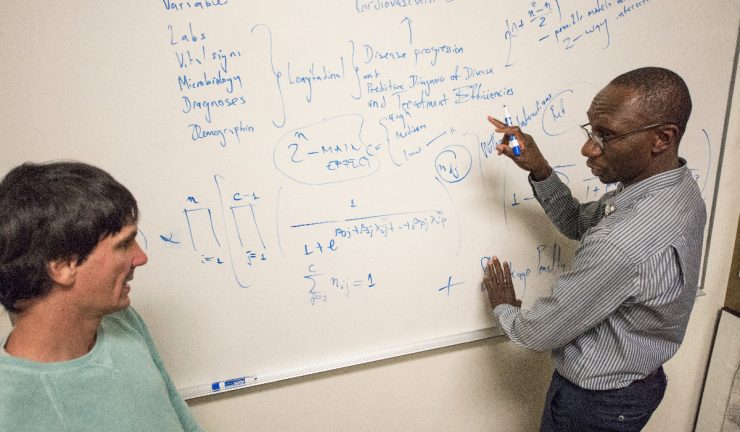 Louis Ehwerhemuepha (MS ’13, Ph.D. ’15), a senior data scientist at CHOC (right), continues to collaborate on research with Chapman faculty members, including his mentor, Cyril Rakovski, associate professor of statistics and computational science in the Schmid College of Science and Technology.
Science & Engineering

The Chapman-CHOC Connection Separated by barely a mile, Chapman University and Children’s Health of Orange County share a collaborative culture that brings the two communities even closer together.

Across a range of research projects, the connections between Chapman University and Children’s Health of Orange County (CHOC) grow stronger every day. Here, we explore a handful of those projects and consider their impact.

But beyond the lab bench and the bedside, there are more links in the chain of collaboration between Chapman and CHOC.

One way the connection changes lives is through the Thompson Autism Center at CHOC, where families, agencies and others learn to navigate the complexities of the education system. The center and Chapman’s Thompson Policy Institute on Disability assist families and schools through their partnership program: Families, Agencies and Schools Together (FAST).

Another manifestation of the bond is the Chapman-CHOC pathway to careers, as CHOC provides Chapman students with internship opportunities and, in turn, the hospital Thinks Chapman First when it has job openings. CHOC is among the top employers of Chapman graduates.

Louis Ehwerhemuepha (MS ’13, Ph.D. ’15) knows every step on the journey between Chapman and CHOC. After starting at the hospital as an intern, he is now a senior data scientist at CHOC,  and he also returns to teach classes at Chapman. In addition, he continues to collaborate on research with Chapman faculty members, including his mentor, Cyril Rakovski, associate professor of statistics and computational science in the Schmid College of Science and Technology.

“Chapman gave me the tools to succeed, and Dr. Rakovski connected me to the providers at CHOC, where advances in care are built on collaboration across all roles,” says Ehwerhemuepha, one of the first graduates of Chapman’s Ph.D. program in computational and data sciences.

“The opportunity to improve the care of children is at the heart of everything we do,” he adds. “Whether in the lab, on the floor providing care or working with data, our job is to save lives.”

Charting the Dangers of Household Chaos and Toxic Stress

Child development experts know that adversity and toxic stress suffered early in life cast a long shadow. Called adverse childhood experiences (ACEs), the risk factors are linked with a variety of conditions across the lifespan, from high blood pressure to depression.

Chapman University professor of psychology Laura Glynn is part of a collaborative team that includes researchers from Chapman, Children’s Health of Orange County (CHOC) and UC Irvine. The researchers want to better understand which children are most vulnerable to these events so that targeted interventions and preventive therapies can be deployed in early childhood.

“California is leading the way in addressing the impacts of early life adversity because of our surgeon general, and what’s really exciting is that Chapman, CHOC and UCI are part of that agenda,” said Glynn, director of Chapman’s Early Human and Lifespan Development Lab. “It’s profound and it’s important.”

A unique portion of the three-year project led by Glynn will also measure how persistent chaos and unpredictability in the household affects child neurodevelopment and cognitive function. Unlike many sources of toxic stress – including poverty, substance abuse, parental incarceration and systemic racism – household chaos can be more immediately addressed, Glynn explains.

“One could argue that things such as encouraging parents to have regular mealtimes, a bedtime routine and consistent family time are easier intervention targets,” she says.

Most households with young children hit hectic patches occasionally, Glynn notes. But with the scale of this project, which will include data gathered from 100,000 children visiting CHOC clinics throughout Orange County, she hopes they can identify a tipping point at which such environments become chronic and unhealthy.

Much of the work also involves the predictive tools behind big data, which brings another Chapman connection to the collaborative effort, CHOC senior data scientist Louis Ehwerhemuepha, (M.S. ’13, Ph.D. ’15).

‘Unpredictability Cuts Across All Socio-Economic Levels’

Additionally, project participants aim to gain insights into the role socioeconomic status plays. Such data will be the focus of Chapman postdoctoral researcher Sabrina Liu, an expert in toxic stress and health disparities.

“The CHOC landscape is very diverse. Unpredictability cuts across all socio-economic levels,” she says.

In the second component of the study, Glynn and fellow researchers at the Early Human and Lifespan Development Lab will collect DNA samples from children at birth and 12 months of age. The goal is to discover if there is an epigenetic biomarker that can predict their level of resilience to ACEs, again so targeted interventions can be provided.

“It’s exciting to get a little closer to how we can incorporate research into practice,” Glynn says. “With this multi-institution collaboration, we are in a position to affect health and pediatric practice in a meaningful way.”

Making Strides on Problems of Balance and Gait

It’s not unusual for young children to demonstrate occasional toe-first contact during early walking development, sometimes referred to as “toe walking.” But when the behavior persists and can’t be attributed to a medical cause, physicians often opt for a wait-and-see approach because the reason is unknown.

But that could be valuable developmental time lost, says Marybeth Grant-Beuttler, an associate professor in the Department of Physical Therapy in Chapman’s Crean College of Health and Behavioral Sciences. New research from Grant-Beuttler and a collaborative team of CHOC and Chapman researchers reveals that many of these children demonstrate impaired balance and functional skills, in addition to the walking issues.

“What I fear is that we’re setting these kids up to be less physically active as adults,” Grant-Beuttler says.

Fall risk is also significant. Five of the children in the study cohort have experienced concussions from falls. Which is why the team is also passionate about a smart shoe insert – an in-home intervention device. The insert vibrates when it detects toe-walking – specifically three consecutive toe-strikes – which reminds the wearer to use the proper gait.

A multifaceted team contributed to its creation, including biomedical engineer Rahul Soangra, a faculty member with Fowler School of Engineering, and Chapman computational science graduate students and alumni Sharon Kim and Michael Pollind, along with computer engineers from UCLA.

Preliminary observations are promising. All but one of the 14 children in the study improved, based on physical therapists’ visual evaluations and parents’ reports. The researchers will know more when they complete and study 3D visualizations of the children’s walking gait.

Supporting the research are grants from the Kay Family Foundation, CHOC-Transformational Philanthropic Venture Funding Program and The CHOC Foundation.

Scrutinizing reams of medical records would intimidate many people, even with the help of data analytics.

But the task is ideal for a researcher in Chapman University’s Crean College of Health and Behavioral Sciences whose work centers on the intersection of stress, emotion and health. In collaboration with Children’s Health of Orange County (CHOC), Assistant Professor Brooke Jenkins is using big data analytics approaches to extract clues from thousands of medical records. She’s seeking insights on two separate fronts that can be especially stressful in childhood – asthma and pain management.

Most recently, she has looked at opioid prescribing for children at CHOC. When the opioid crisis prompted a shift away from the use of many prescription painkillers, one very important factor in the recalibration did not change. Pain.

Nevertheless, managing discomfort is essential, so finding a healthy middle ground is vital, Jenkins says. It’s important because a tough-it-out approach can have lasting repercussions, especially in children and adolescents.

Jenkins’ first step has been to focus on in-hospital prescription pain medications. With support from a $95,718 Kay Family Foundation Data Analytics Grant, the researcher is analyzing 60,000 CHOC medical records drawn from nearly every department.

Is Race a Predictor of Opioid Prescribing?

One study within the project focused on differences in race, ethnicity and insurance as predictors of opioid prescribing. Assisted by CHOC senior data scientist and Chapman alum Louis Ehwerhemuepha (M.S. ’13, Ph.D. ’15), she found that white children were more likely to be prescribed opiates than their Hispanic and Black counterparts. The two published their findings in the Journal of Racial and Ethnic Health Disparities.

In the asthma project, Jenkins is looking at data from medical records to see which demographic groups may be lacking asthma action plans. Those written strategies used by patients, families, caregivers and school personnel are known to be key tools for successful asthma management. But some children and their families don’t have them. Jenkins is looking to see what factors contribute to that disparity.

“Knowing where these disparities are is the first step in helping these children and families,” she says.

A study of patient zip codes, or geocoding, is a component of another project using the CHOC data, conducted in collaboration with Ashley Kranjac, assistant professor in Chapman’s Department of Sociology. Jenkins says that work may produce a better understanding of how air quality influences asthma, which affects more than 6 million U.S. children.

“I am incredibly fortunate to work with my collaborators at CHOC who truly value what research adds to the practice of medicine,” Jenkins says.

Research leading to improved outcomes for pediatric cancer patients is the focus of several projects by a faculty member and clinical pharmacist at Chapman’s School of Pharmacy (CUSP) in collaboration with the CHOC Cancer Institute.

Sun Yang, an assistant professor at CUSP, is working to unlock insights that could improve pain management, stem-cell transplants and infection risk in pediatric oncology patients. Among them are:

“Every morning you just want to go to work because you know what you’re doing is helping patients. Working with CHOC helps me see the patients we’re working to help,” she says. “It’s very rewarding.”