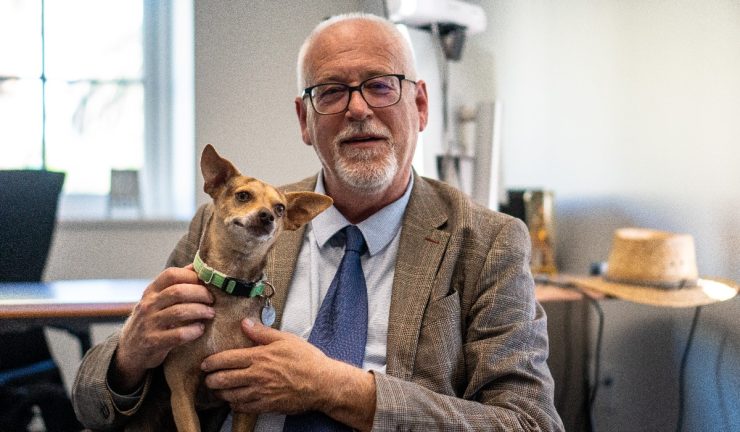 New Dean at Chapman School of Comm is a Mathematician, and Here’s Why That Isn’t as Wild as It Seems Dean Moshier brings an interdisciplinary approach to leadership and makes the case that communication is a concern for every discipline.

When M. Andrew Moshier was asked to become dean of Chapman University’s School of Communication, his initial reaction was surprise. He’d been a department chair for 10 years, but he wasn’t gunning for academe’s version of the corner office.

And there was one other teeny, tiny factor. He’s a mathematician and computer scientist. A highly accomplished one, but still a scholar that seemed a world away from communication studies.

Or maybe not. As Moshier, Ph.D., considered the new post, the idea grew to make sense from an academic and administrative perspective. His early work and dissertation focused on the science and mathematics of language and linguistics and established some mathematical foundations for contemporary formal linguistics. Later, he worked on projects in formal and computational linguistics, especially on the European Commission (the forerunner of the European Union) project called Verbmobil.

“In a way it’s like coming home. I was originally going to be a linguist,” he says.

Equally appealing, though, was the opportunity to work in a truly interdisciplinary fashion. Chapman actively nurtures interdisciplinary connections, he says, so the move didn’t seem so unconventional. Plus, he’d previously served as chair of the Math, Physics and Computer Science Department and describes his leadership style as one that transfers well.

“I like being somebody who introduces people to each other and facilitates that kind of communication and collaboration. That’s a real joy for me. I can step away and watch them work together,” he says.

It’s an opportune moment for that leadership style in the relatively young School of Communication, established in 2017 by its inaugural dean Professor Lisa Sparks, says Glenn Pfeiffer, Chapman’s immediate past provost who made the appointment.

“This transition period is very important for them as they continue on their path to national prominence. Drew has been an active and visible participant in the Chapman community for more than two decades now – as a scholar, teacher and as a leader in faculty governance. His multidisciplinary background as well as his thoughtful, deliberate and collaborative leadership style made him a natural choice for this position,” Pfeiffer says.

Although young, the school is home to more than 650 undergraduate and graduate students, including an inaugural Ph.D. cohort that will graduate in spring 2022. With such a solid beginning, Moshier says he and his faculty can strategically plan the school’s next steps.

So he is “reading and digesting a lot” of the literature about communication studies and how the discipline can meet students’ and society’s evolving needs. He sees scholarly and teaching opportunities around artificial intelligence, science communication and the challenges rising from algorithmic communication deployed by social media companies.

Political communication interests him as well.

“There’s a real hunger for us to try to understand in a healthy way how we can recover political communication so that it’s good for us. Because right now I think almost everybody agrees that the way we are communicating about politics is unhealthy,” he says.

He says it’s too soon to consider what might develop under his tenure at School of Communication, but he imagines building interdisciplinary bridges across campus.

“We’re not an isolated school of communication. We’re embedded in a university that values interdisciplinary relationships. I can’t think of a discipline that doesn’t need to communicate well,” he says. “We understand the structure of communication and can ask the right questions. We can help.”

And who couldn’t use a little help with communication these days?