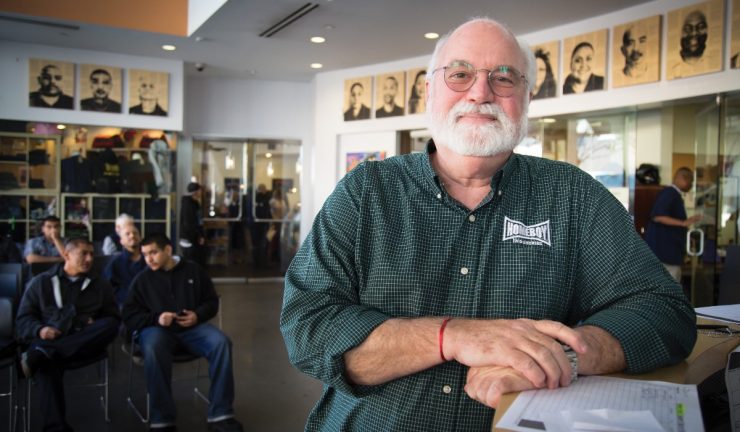 A native Angeleno and Jesuit priest, Father Gregory Boyle has been a leader in the cause of gang-intervention. His talk at Chapman, “Faith That Does Justice,” is open to the public.
Humanities & Society

Father Gregory Boyle, founder of Homeboy Industries, the largest gang-intervention, rehabilitation and re-entry program in the United States, will speak at Chapman University on Friday, Nov. 12, at 5 p.m. in Musco Center for the Arts.

Boyle’s talk, “Faith That Does Justice,” will draw on his experience working with parish and community members to create lasting solutions to gang violence.

Each year, Homeboy Industries assists more than 8,000 people who come to them seeking help to transform their lives. A hallmark among the organization’s initiatives is its enterprise industries, known for producing and marketing popular food items ranging from salsas to gourmet cookies.

In recognition of his inspirational work, Boyle will receive an Honorary Doctorate in Humane Letters from Chapman President Daniele C. Struppa.

“Father Boyle understands that a willingness to embrace new ideas is an important step in the search for answers to society’s greatest problems. Through Homeboy Industries, he has changed the world around us by helping thousands of young people reinvent their lives in forward-thinking programs and social enterprise endeavors,” Struppa said. “Like the people of Chapman University, he knows that there is no limit to what can be achieved through imagination, knowledge and dedication. We are proud to honor him with this Honorary Doctorate in Humane Letters in recognition of such transformative accomplishments.”

Boyle is the author of the 2010 New York Times-bestseller “Tattoos on the Heart: The Power of Boundless Compassion.” Other books include “Barking to the Choir: The Power of Radical Kinship” and “The Whole Language”, which was published in 2017.

In 2014, President Obama named Boyle a Champion of Change. He received the University of Notre Dame’s 2017 Laetare Medal, the oldest honor given to American Catholics. In addition, he has received the California Peace Prize and been inducted into the California Hall of Fame.

Boyle served on the State Commission for Juvenile Justice and Delinquency Prevention, The National Youth Gang Center Board and the Attorney General’s Defending Childhood Task Force. Currently, he serves as a committee member of California Governor Gavin Newsom’s Economic and Job Recovery Task Force as a response to COVID-19.