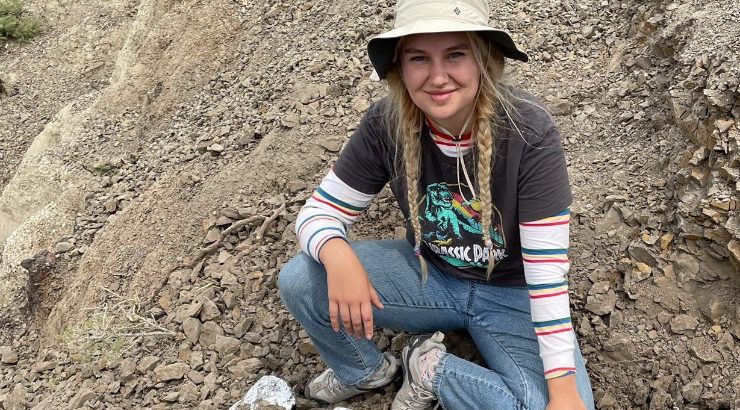 As a television writing and production major, Chapman University student Sarah Wallace ’22 can spot a clichéd storyline a mile away.

Like this one, for example. Student drives with college friends to Montana to dig for dinosaur bones as part of a semester-end project. Exhausted, she collapses into her sleeping bag and dreams of finding a huge dinosaur fossil. Cut to the next day at the dig site. What does she find? A huge dinosaur fossil, of course. Enter excited paleontologists who remind the student that as the finder she gets to name the discovery. She proclaims it the “Dream Bone,” proving that – cue the happy music! – dreams can come true.

Fossils on the Syllabus

But here’s the twist. That series of events really happened to Wallace this summer as a participant in an ongoing dig overseen by Chapman Presidential Fellow Jack Horner, the renowned paleontologist who partially inspired the Alan Grant character in “Jurassic Park.” Wallace spotted a portion of a hip bone belonging to a duck-billed dinosaur that lived in North America about 78 million years ago.

“I don’t think I realized how big a deal this was at first,” Wallace says.

Indeed, that three-foot bone, an ilium, to be precise, led the paleontologist team on site to uncover more fossils from the prehistoric animal, including a portion of its pelvis.

Finding a group of bones like that is important because it helps secure the kind of funding that supports a more extensive dig to excavate other fossils most likely embedded in the rock, Horner says.

“You get very excited when you find stuff like that,” the paleontologist says.

But how did a television writing and production major end up making such a significant contribution to the field of paleontology? It began when Wallace heard about the University Honors Program course “Dinosaurs in Science and Media” taught by Horner. Inspired, she applied to the program.

‘I Learned Much More Out There’

The course offered much more, however. Horner’s curriculum immersed the students in the science and myth of dinosaurs, a world often dominated by the dino celebrities – T-rex and the like.

At semester’s end, Horner always invites students to join him in Montana at the Badlands site where he and a paleontology team from Oklahoma State University work every summer. This year Wallace and Chapman classmates Ben Tuschman ’22, Ghen Raz ’22 and Casey Hoerman ’22, along with friend Lila Motley, made the trek.

In the field, hands-on science instruction rocketed. The students learned to identify sedimentary layers and differentiate rock from bone.

“We went around on ATVs for the first couple of days and went to micro sites where we found teeth and claws and bone fragments,” she says. “It’s a rare, special place. You can see the mudstone, the sand stone, and the coal layer. I learned much more out there.”

Classroom in the Field

And their eyes grew a little more skilled at differentiating rock from bone. So when Wallace spotted a tiny bone jutting from the dirt in the site they were examining, she was compelled to take a closer look. She picked off some of the mudstone surrounding it. Then her hand slipped into a little cavern beneath the dirt and skimmed across something smoother than rock, mud or sand.

“It was definitely bone,” she recalls. “I kind of casually said, ‘Hey, you guys might want to come and look at this.”

It was the ilium of what Horner suspects was a 30-foot gryposaurus, a species of duck-billed dinosaur. The paleontologist team stepped in, but allowed Wallace to continue helping and, in the tradition of the discipline, invited her to name the find. She recalled her dream from the previous night, the one where the team found a huge dinosaur bone. Thus, “Dream Bone” entered the record.

In addition, it’s a significant find with big potential. If it’s a gryposaurus, it would be only the second one found in Montana, Horner says.

That a television-writing student found the fossil is a happy coincidence for the scientist who has taught paleontology at the university level and advised filmmaker Steven Spielberg on the “Jurassic Park” movies.

For Wallace, connecting this summer experience to a writing or film project someday is a real possibility.

“I’m not cut out to be a paleontologist. I don’t know that much about anatomy,” she says with a laugh. “But I think one day I could make a story out of this.”

And that would be another dream come true.