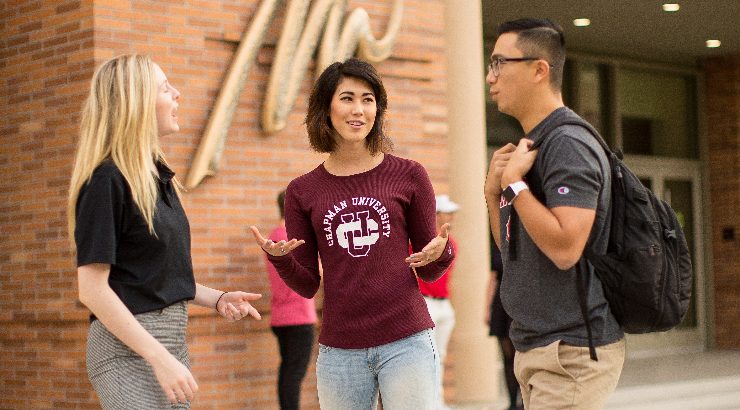 Even without the opportunity for in-person visits during the pandemic, more than 15,000 students applied for admission to Chapman University in fall 2021. (File photo)
University News

Chapman University offered admission to a remarkable first-year cohort of students for its class of 2025 – a resilient  group that had their senior years  interrupted by a pandemic – that has set the university on track to potentially welcome its most diverse class ever.

The accepted students were selected from a pool of more than 15,000 applicants, a 13.5% increase from just four years ago and the largest number in Chapman history. Collectively they represent a variety of backgrounds, cultures and geographic diversity.

‘These Are Stellar Students’

“Chapman’s growing prominence is certainly reflected in the number of applicants and their academic achievements. We have been incredibly impressed with the academic and personal accomplishments from all the students who chose to apply this year, and I’m especially proud to offer admission to a larger number of students that come from underrepresented communities,” said Marcela Mejia Martinez, assistant vice president in Chapman’s Office of Admission. These are stellar students who might be first generation or undocumented or underrepresented in higher education, and I am hopeful that they will chose to join the Chapman community.

To achieve a goal of 1,800 enrolled first-year students in fall 2021, slightly more than 8,000 outstanding students received acceptance letters to Chapman University’s Class of 2025. Admitted undergraduates have until May 1 to make their admission decisions.

Slightly more than half of the admitted students identify as African American, Latinx, Native American, Asian, Pacific Islander or of multiple ethnicities. In addition, the accepted cohort includes:

While these numbers were influenced by the pandemic, Mejia-Martinez said, they also afforded her department the opportunity to strengthen its holistic application review process.

“In addition to academics, our admission team focused on some key areas like leadership, service and communication skills, and other non-cognitive variables,” she said. “We emphasized what we call ‘Strength of Character’ attributes and characteristics that identify a successful and competitive Chapman University applicant.”