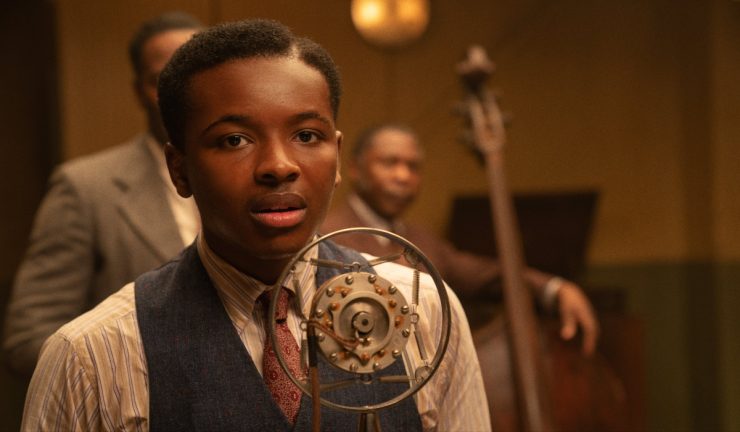 For actor Dusan Brown ‘24, the recently released Netflix film “Ma Rainey’s Black Bottom” was both a breakthrough opportunity and a bittersweet experience.

Playing Sylvester in the adaptation of August Wilson’s revered stage play, Brown is at home in an acclaimed cast, giving a performance described as pitch perfect by critics. But the film also stirs feelings of heartbreaking loss, as it marks the final performance of lead actor Chadwick Boseman. The “Black Panther” star died in August of cancer.

“Dumbfounded” to Work Alongside Chadwick Boseman and Viola Davis

Brown, a first-year film production student in Chapman’s Dodge College of Film and Media Arts, acted alongside Boseman in a pair of films, including the Jackie Robinson biopic “42.” He and Boseman became friends.

“He just had an unexplainable energy,” Brown said. “We would talk on set, and he would tell me to take my time, to enjoy every experience, and to be proud of myself. This was a special project, and for me it was doubly meaningful.”

Brown says it was terrifying at first to have scenes with accomplished actors such as Boseman and Viola Davis, but it was a joy to sink his teeth into dialogue written by Wilson.

“The work is so meaningful,” he says. “I’m dumbfounded that I got to be part of it.”

At the same time, Brown, a native of Chicago, has been prepping for such moments since he was 7 and landed his first film role, in “Desertion,” about Howard Hughes. He has since gone on to do lots of series TV work (“Big Bang Theory,” “Community,” “The Lion Guard,” others), as well as work in films.

Growing as a Screenwriter and Director in a Village of Filmmakers

At Chapman, his academic emphasis is directing, but he has especially enjoyed his screenwriting courses, in which his professors and student colleagues are “helping me to dive deeper into characters and be more collaborative,” he says. “Seeing how my ideas bounce off other people is really awesome.”

Mixing acting with school has always been a search for balance, Brown adds. His ultimate goal is to achieve that balance professionally, mixing writing, directing and acting to tell the best stories he can.