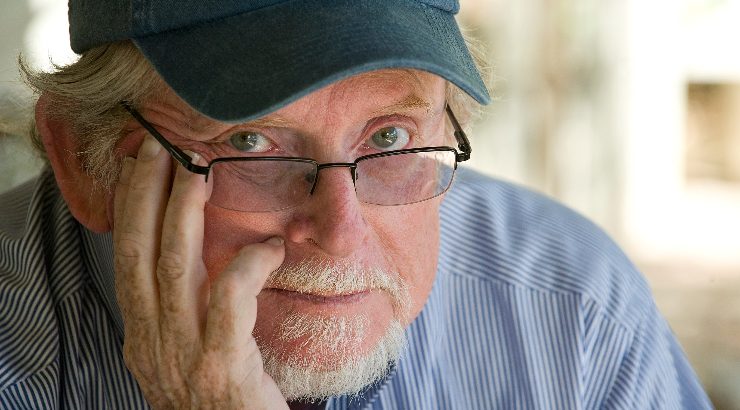 Movie theatres across the nation will join in a Nov. 10 Fathom Events and Brainstorm Media screening of “Recon,” a World War II drama based on “Peace,” a 2008 novel by Richard Bausch, a professor in Chapman University’s MFA in creative writing program.

Among the theatres in the Veterans Day eve screening is one just up the road from campus, where Bausch is looking forward to capturing a selfie with director Robert Port in front of the marquee alight with the film’s name. The film will be available for streaming shortly after its theatrical debut.

“Use Adversity” When Writing, Bausch Tells His Students

But none of that flashy fun comes up in the Tuesday fiction class Bausch is teaching this semester at Chapman. Wearing one of his characteristic ballcaps, he peers at his students, across Zoom for the moment, and teaches writing as he always has – with methodical guidance, an expectation that everyone will read at least 12 Anton Chekov short stories and a reminder that writing is always a struggle. Pandemic or no pandemic.

“No, I haven’t really talked about the pandemic,” he says.

But it will likely surface at some point for many students, says the U.S. Air Force veteran. Hard Times have a way of doing that in literature.

“The thing for it, the writing, is to use adversity. Every writer I know who ever got through enough to start publishing, had some adversity they’ve used, wittingly or unwittingly,” he says.

Two other films have been spun from Bausch’s work, including Espèces menaces, inspired by the short story collection “Endangered Species” and directed by Gilles Bourdos, and 1994’s “The Last Good Time,” based on Bausch’s novel of the same name.

He delights in seeing what filmmakers do with his work. “Peace” was already a tense story, featuring characters who struggle with the moral ambiguities of war on a reconnaissance mission in the depth of World War II. But Port upped the juice, adding a white-knuckle suspension bridge scene not in the book. “It’s astounding,” Bausch says.

Connecting His Students With Acclaimed Writers

But he doesn’t get too involved in that process, preferring to stick to the writing and teaching. He’s helped connect students with acclaimed writers through the reading series WordTheatre, an annual highlight for Chapman MFA students. And as author of 12 novels and nine collections of stories, he knows how to lace his instruction with essential craft lessons and keep-at-it nudges.

“Just continue to write even when you don’t know where it’s going,” he tells students. “Sometimes you don’t have a choice. You have to keep going. You throw your hat over the wall and now you gotta’ go get it.”