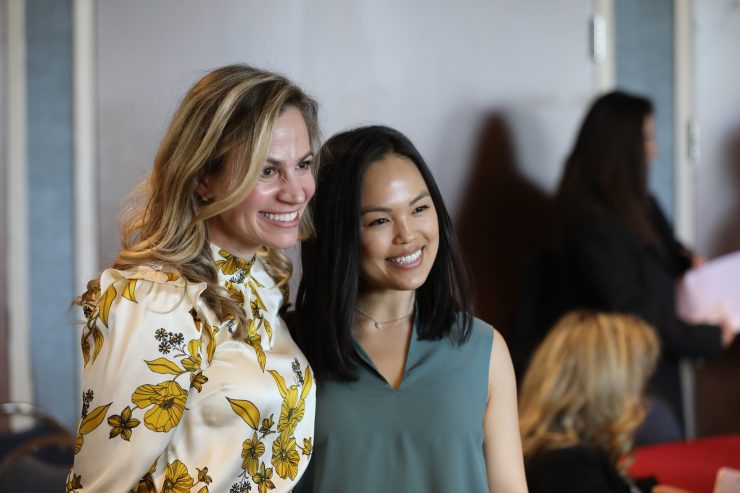 From Unexpected Spy to Inspiring Teacher In her memoir and at an Attallah College event, Tracy S. Walder (MA ’07) details her road from CIA officer to mentor for young women pursuing careers that defy gender stereotypes.

Imagine being responsible for protecting the lives of millions of people. Imagine trying to hunt down terrorists and thwart plots involving suspected weapons of mass destruction. Imagine feeling the weight of every act of terror in Europe, the Middle East and Africa.

As a college student, Tracy S. Walder (MA ’07) seized an unexpected opportunity when she was recruited by the CIA. The 9/11 attacks then thrust her into the fight against terrorism, as she staffed war rooms at the CIA’s Langley, Virginia, headquarters and hid in the trunks of cars on her way to debrief terrorists at black sites. After the CIA, Walder became a special agent at the FBI and the Los Angeles Field Office, specializing in Chinese counterintelligence operations.

Walder chronicles her extraordinary experiences as a counterterrorism officer in the CIA and a special agent in the FBI in her recently released memoir “The Unexpected Spy: From the CIA to the FBI, My Secret Life Taking Down Some of the World’s Most Notorious Terrorists” (St. Martin’s Press, 2020).

Walder’s firsthand account gives readers a glimpse into counterterrorism efforts during the years immediately following the Sept. 11 attacks. In addition to documenting her personal journey — from a child bullied by her classmates to a CIA interrogator to an educator empowering her young women students — Walder’s unclassified memoir also highlights the work of well-placed and high- ranking women in the CIA, as well as the gender discrimination she faced serving her country.

With her slight frame, long blond hair and infectious smile, Walder didn’t fit the stereotype of a CIA operative or FBI agent. She often struggled to be taken seriously in these male-dominated worlds. Although she was respected by her CIA colleagues, she faced immense discrimination from spies in agencies based in Africa, the Middle East and Europe.

“I was underestimated by most people I encountered,” she explained during during her keynote talk at the 4th Annual Women’s Leadership Forum hosted in early March by Attallah College of Educational Studies.

As an intelligence officer, Walder learned to use slights to her advantage.

“When I interrogated high-ranking al-Qaida terrorists, I provided a baffling mixture of youth, Americanism, femininity and Judaism. They didn’t understand the threat that I posed,” she said with a mischievous grin. “Few, if any, ever knew that behind my white-tooth smile, I was wormholing my way into and unraveling their WMD plots.”

Seeking stability and a less-demanding travel schedule after four years with the CIA, Walder took a position with the FBI. However, she was confronted by intense gender discrimination both during her training and while on assignment as a counterintelligence officer in Southern California. After only 16 months, she left the FBI.

“This experience is what helped me find my true passion: education,” Walder said. “I came to the realization that the only way to change the gender dynamic in these fields is really simple – have more women in them.”

As much as “The Unexpected Spy” chronicles Walder’s work serving her country in the war on terror, it also lays the foundation for her shift into teaching. The rampant sexism she faced during her short time with the FBI strengthened her conviction to be a teacher. Walder found the graduate teacher education program at Chapman University’s Attallah College of Educational Studies the perfect fit for her. At Chapman, she was able to figure out who she was as a teacher. In particular, Attallah College’s efforts to incorporate diversity into its curriculum aligned with her background.

“She was just the sort of critically conscious and action-oriented teacher we tried to prepare. I am sure her background in the CIA helped her understand and appreciate the way the world is and the way the world could be,” says Brown, who has a joint appointment in Chapman’s Department of Peace Studies, Roxanne Greitz Miller, the Donna Ford Attallah Endowed Professor in Teacher Education and interim dean of Attallah College, has stayed in contact with Walder over the years.

“It is terrific that Tracy continues to inspire female students to pursue any paths that interest them, especially in fields where there is a history of obstacles,” Miller said.

After finishing her graduate studies at Chapman, Walder spent 14 years teaching history and government in both private and public high schools. She served the past 10 years in Dallas, teaching at the Hockaday School, the largest all-girl school in the United States. She says her experiences in the CIA and FBI made her a better teacher.

“It was an immersive course that gave me a postgraduate-level education in politics, foreign policy, world history and cultural history,” she said.

Her goal was to help students fully grasp both domestic and international politics. She wanted them to understand the interconnectedness of the world.

At Hockaday, Walder created the first high-school-level class in national security, espionage and terrorism. To bring the content alive, she Skyped in former colleagues like a CIA makeup artist who works with undercover agents and the director of rapid response for the Republican National Committee. She also packaged her curriculum and shared it with other high school teachers at the National Coalition of Girls’ Schools.

As a result, former students have interned at the State Department, and several currently work at the CIA and FBI.

Today, Walder is taking her message to a larger audience. In addition to public speaking though the World Affairs Council, she serves on the Board of Directors at Girl Security, an American nonpartisan nonprofit that encourages young women to pursue national-security careers through learning, training and mentoring support.

“I do feel that the female voice is missing in the national security field. We need men and women. We need both to create a balance,” said Walder.

Her goal is to inspire young women to take on positions of power so they can help influence policy and action.

“During my time at the FBI, I was too timid to speak out about the gender discrimination I experienced,” Walder said with her trademark smile. “But today, no one can shut me up.”