The Economic & Business Review offers comprehensive national, state and regional data and is highly recognized for its statistical accuracy. 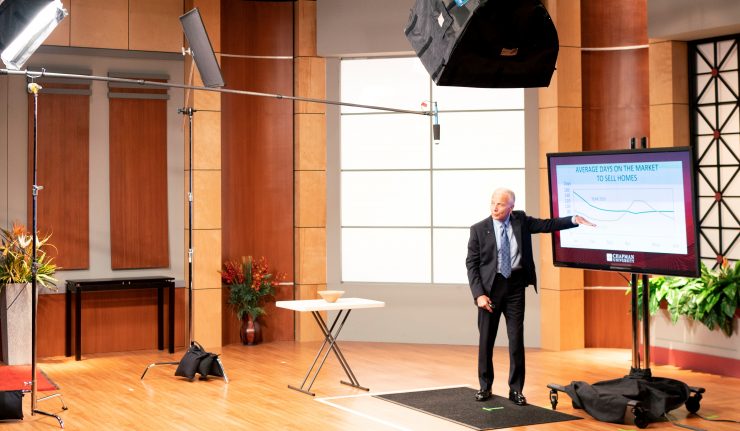 The U.S. economy will begin its recovery from the coronavirus recession this summer, ending a deep and extraordinarily fast plunge in GDP, consumer spending and employment, according to Chapman University’s Forecast Update presented by President Emeritus Jim Doti.

That will be thanks to attractive interest rates, modest construction and a combination of the fiscal stimulus packages and the Fed’s purchase of government debt.

“It’s the basis for our optimism in our forecast,” Doti said in his annual presentation of the A. Gary Anderson Center’s Economic Forecast Update on Tuesday, June 23. “By the end of the year we will be adding 18 million jobs, which is 75 percent of the 24 million lost.”

Economists characterize such a recovery as “V-shaped.” Still, the recovery will have its limits and GDP will end the year with a 3.8 percent drop, Doti said.

“In spite of what appears to be a V-shaped recovery, the total number of jobs in the state by year-end will still be lower than before the COVID-19 pandemic hit,” the economists wrote in their newly published “Economic & Business Review.”

Building and construction will suffer, but not collapse, the economists predicted.

“That’s not to say that construction will be an engine of economic growth this year. On the contrary, it will take its share of lumps. But these lumps will not be anywhere near the kind of losses that occurred in prior recessions and especially the Great Recession,” they wrote.

Keeping with its election year tradition, the forecasters used an econometric model to predict the popular vote in November’s presidential race and called a win for former Vice President Joe Biden. Based on calculations using several factors from inflation to job growth, Doti predicted Biden winning the popular vote by a 10% margin.

The formula — applied retroactively to 1960 — has accurately forecast 15 of the last 16 presidential elections, Kennedy-Nixon being the lone exception.

Other key takeaways from the report include:

Complimentary viewing of the Forecast Update is available online.

Read all the Forecast Update predictions in the A. Gary Anderson Center’s “Economic & Business Review.” The report includes comprehensive data at the national, state and county levels as well as a forecast of economic activity for the U.S., California, and Orange, Riverside and San Bernardino counties. Copies are $150, $75 for alumni. Visit the Anderson Center website to order.

The Conversation Continues with ‘Chapman Connects’