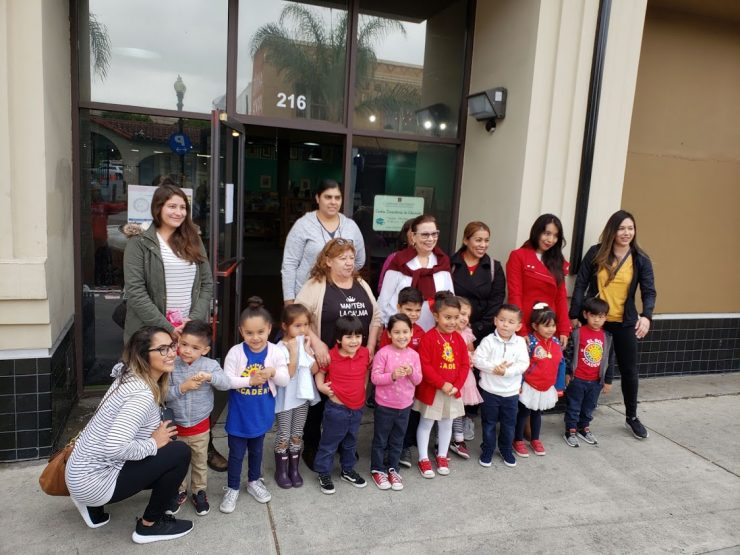 Anaida Colon-Muniz pictured with a group of preschoolers in front of Centro Comunitario de Educacion in Santa Ana. (File photo)
Working at Chapman

After nearly 50 years as an educator and community leader, Professor Anaida Colon-Muniz, Ed.D.,  is retiring. Her career has included working with students and parents at all levels – from preschool to university. She prefers to lead from “inside the community, rather than in front of them,” she says. “My style of leadership comes from a place that takes its lead from the community members,” says Colon-Muniz. “I think it’s really important to listen and watch and to support the kind of needs that come from a particular location.”

A lot has changed in the time that Colon-Muniz has been working in the world of education. Today, educators all over the world have been called on to change their teaching methods. They’re evaluating new ways to maintain the bonds that build the future. The Attallah College of Educational Studies professor, who finished her final semester of teaching via remote methods, says, “In times of uncertainty, there are great opportunities for creativity and hope.”

Among her many commitments while at Chapman, Colon-Muniz was the director of Chapman’s Centro Comunitario de Educación, in Santa Ana. At Centro, Colon-Muniz helped reach 1,400 preschoolers and early childhood students, and distributed over 7,000 books to young learners.

She was able to make this kind of community-based education possible through strong connections built with The Lloyd E. & Elisabeth H. Klein Family Foundation, a partnership with Orange County Padres Unidos (OCPU) and El Sol Science and Arts Academy, also in Santa Ana.

Just prior to the end of the academic year, Centro’s doors had to close, permanently. Despite this, says Colon-Muniz, the connections built there are strong and have the opportunity to continue to grow. And with the right nurturing, so much is still possible.

“Chapman University and the Attallah College of Educational Studies remains committed to supporting Santa Ana and our local community,” said outgoing Dean Margaret Grogan. “Chapman looks forward to exploring new ways to support its neighbors as we navigate the future together.”

Building Creativity in the Spirit of Learning

Creativity is the key to grow a community’s learning spirit, says Colon-Muniz. She adds that connections built with accessible models like book clubs, children’s story times, writing workshops and community-reflective arts, such as exhibits, poetry readings and literacy events – are all pieces that strengthen the bond to encourage growth. This is particularly true in underserved communities, she says. These methods create a sense of belonging – a place to be able to express one’s self and see yourself reflected in the work and achievements of others. There’s a sense of shared pride when someone discovers their skill to create.

“I think that was what made me happy to be in the community and represent Chapman in that way because it was saying a private university can do this,” said Colon-Muniz. “We give back and it makes a difference to individuals. And that’s important work.”