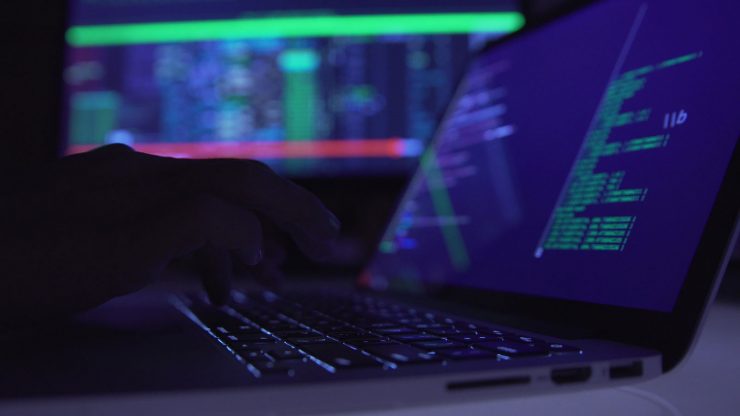 From computer hackers to identity thieves to phishing emails, cyber attacks are becoming more and more common – and complex. Such cybercrimes cost the U.S. economy about $100 billion annually, according to the FBI Internet Crime Complaint Center, threatening millions of people and hundreds of organizations. It’s a quickly evolving issue, and scientists are struggling to address an elemental question: “What can be done to secure people from cyber attacks?”

At Chapman University, such questions are the launching pad for an ambitious effort to solve complex global problems. Known as the Grand Challenges Initiative (GCI), the program inspires teams of Chapman undergraduates to take on issues that demand breakthroughs in science and technology.

Working in small interdisciplinary teams over the first two years of their Chapman experience, students engage in grand challenges ranging from realizing unlimited renewable energy to explaining how the brain functions. Throughout the program, students build a sophisticated intellectual foundation for the rest of their academic journeys and their professional careers.

“The GCI looks totally different from many classroom experience in that there are no lectures,” said Gregory Goldsmith, Ph.D, assistant professor of biological sciences and director of the Grand Challenges Initiative. “We are empowering students to come together to understand and solve big problems that they find to be of personal interest.”

For the team taking on the grand challenge of developing protections from cyber attacks, the problem “looked impossible at first glance,” said Rae Ross ’21, a computer science major and one of the students working on the project. “But our goal was to come up with a feasible project and a plan to organize how to realize a solution.”

In addition to Ross, the team features computer science majors Jonathan Burns ’21, Jonathan Bahm ’21, Kiara Cardona ’21 and Tristan Chilvers ’21, as well as biochemistry major Kristina Nguyen’21. They were not left to take on the challenge alone. Goldsmith provided faculty mentorship, helping the students dive into an extensive body of research on cybersecurity and getting them acquainted with college-level courses and expectations. They were able to take the broad grand challenge of cybersecurity and frame it around the needs of the Chapman University community, in an atmosphere that was familiar and relatable to them all.

The end result was Cyber Smart Panthers, a campaign to help students and others at Chapman understand and embrace positive cyber habits. Working with each other and their mentor, the GCI team members developed a three-pronged approach: secure the University’s Web applications, secure the Chapman network, and secure the human connection through education and training.

“We all know about in-person crimes — nobody wants to be robbed, nobody wants their car stolen, but people may be less aware of how big of a threat cybercrimes are,” said Ross. “No solution is perfect, but by raising awareness and enforcing good practices at Chapman, we can reduce the number of cybercrimes that would affect us directly.”

After participating for a year in the GCI program, Ross and Burns organized and led a cyber self-defense workshop during Chapman’s orientation week, with FBI Special Agent Bryan Willett as the guest speaker. The audience was incoming first-year students and their parents, who gained insights on topics such as online credit-card security, password management and smart social media habits. There wasn’t an empty seat in the room.

By the end of their sophomore year, team members formed a partnership with the University’s Information Systems and Technology Office to evaluate Chapman’s wired and wireless networking capabilities. They also developed a Cyber Smart Panthers website, with a host of tips and resources, including a public-service announcement video that the students directed, produced, edited and starred in.

“The Grand Challenges Initiative is preparing me for my future career,” Ross said as she reflected on the two years of growth. “It gives a lot more hands-on experience — it’s one of the best ways that we can learn because it is comparable to what we’ll do in the workplace.”

Stay Safe with These Tips from Cyber Smart Panthers

Cybercrime cost Americans $100 billion annually, the FBI reports. In fact, the chances of being hacked are far greater than those of having a home or car burglarized.  So, what are you doing to be cyber smart? Here are tips developed by Chapman’s Cyber Smart Panthers team from the Grand Challenges Initiative.

“Phishing” emails are the most common way for cyber criminals to access your computer or online accounts. Beware of these signs that a message might contain damaging malware:

When in doubt, don’t open the message or click on links.

We’ve all seen those pesky patch updates for computers, phones and tablets. While they can be annoying, they play a huge role in protecting devices, credit cards and online identity. Keep all your devices current with patches and updates.

Use a passcode for access on every computer and smartphone. Also, be sure to have anti-virus software with “remote wipe” capabilities (Find My Phone, Lookout, etc.).

Use two-factor authentication to secure your social media accounts. That way, a message will be sent to your phone to confirm you’re not a hacker. Turn on two-factor settings in Twitter or Snapchat using “Login Verification,” and Facebook or Instagram using “Two-factor Authentication.”

Take care using public Wi-Fi at coffee shops, hotel lobbies or airports. Cyber criminals can get access to your device or accounts via spoofed Wi-Fi hotspots. If you’re unsure about the public Wi-Fi, steer clear.

A common way that hackers get your data is by guessing or stealing passwords. Take your passwords to the gym – make them strong!

From Makerspace to Marketplace? 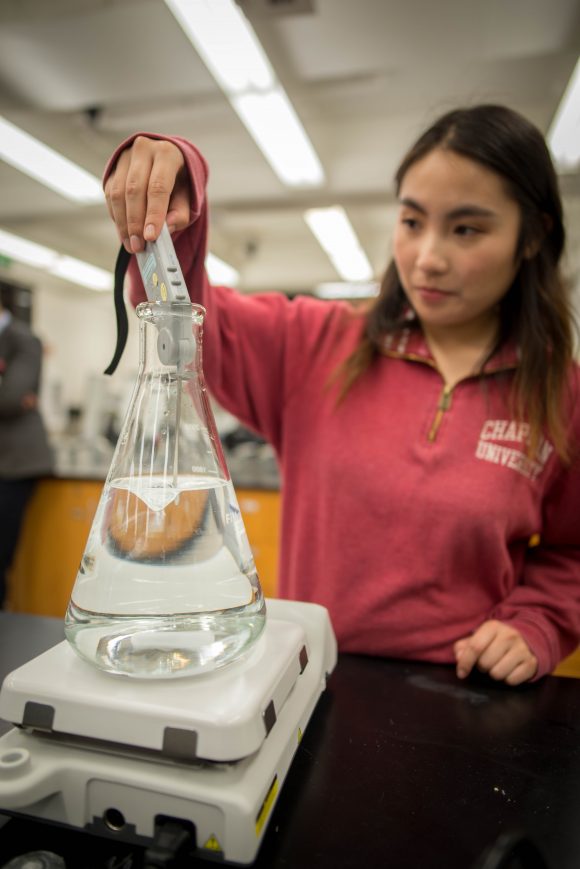 Chapman’s Grand Challenges Initiative (GCI) began in fall 2017 and has grown to include more than 500 students working on as many as 90 projects. All undergraduates in the Schmid College ofScience and Technology and the Fowler School of Engineering are required to participate, but students from other schools and colleges are also taking up the challenge.

From climate change to curing neurodegenerative diseases, plastics in the oceans to food accessibility, the issues being addressed are among the planet’s most important and most vexing.

Student teams do much of their work in the GCI Makerspace. There, they have access to sophisticated equipment ranging from 3D printers to virtual 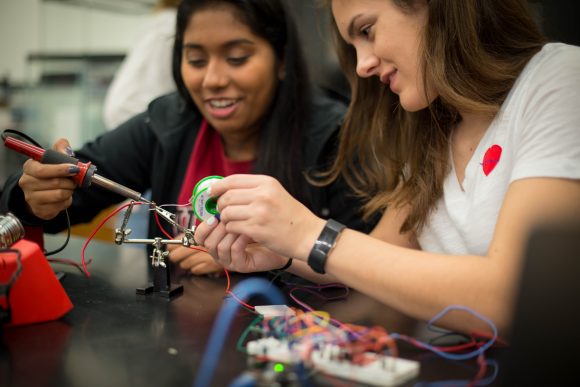 reality headsets, as well as advanced microscopes and analytical balances. From this creative space GCI students have produced, among other things, a working drone and a VR simulation of what it would be like to land on Mars.

“I have been amazed at how far students can go when one challenges them with seemingly unattainable goals in the context of a nurturing, mentored experience,” said Andrew Lyon, Ph.D., dean of the Fowler School of Engineering. “The GCI translates this approach by providing our students with an exciting and differentiated educational experience.”

This student effort is inspired by the work of biologists and chemists pursuing alternative approaches to cognitive health, including Alzheimer’s detection and prevention.

The Chapman students took up the challenge of improving long-term focus using the amino acid tyrosine as a possible natural alternative to drugs like Adderall. They found evidence that adding tyrosine to cells stimulates the release of ATP – the primary carrier of energy in organisms. The increase in ATP shows the potential of tyrosine to improve cognition and increase attention span.

From learning the science of computer hardware right through to marketing a product, students working on this challenge have come a long way in a short time. The result is a prototype of a wearable monitor that can give patients a means for recognizing their own heart health symptoms.

“The students, who are all biology majors, have developed a wide range of skills that took them beyond their comfort zones,” says José Raúl González Alonso, Ph.D., the postdoctoral fellow who mentored the team.

Participants even 3D-printed the box in which the monitor would be sold.

“They are dedicated to further developing the product,” González Alonso said. “We are excited to help them realize their goals.”