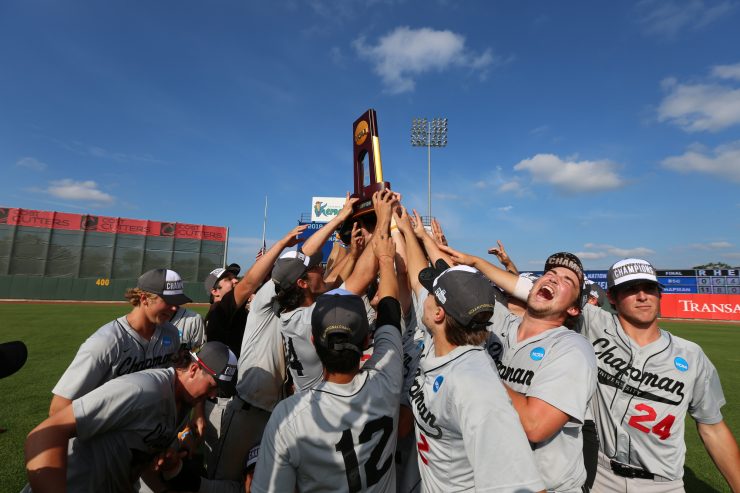 Culminating a season full of hard work and mythic comebacks, the Panthers captured the greatest prize a college baseball team can claim – a national championship. Chapman University earned the title by sweeping the best-of-three Championship Series against Birmingham-Southern College on June 4 in Cedar Rapids, Iowa.

The NCAA Division III College World Series title gives the Panthers their third national championship, after victories in 1968 and 2003. They were runners-up in 2011.

Nicknamed “The Comeback Kings,” the Panthers demonstrated grit throughout the season by keeping their cool while methodically scoring late-inning runs, often surprising their opponents as well as their fans.

No one, however, was surprised when the Panthers won the 2019 Southern California Intercollegiate Athletic Conference (SCIAC) Postseason Tournament. They were the defending champions and favored to repeat.

The NCAA West Regional and Super Regional were a different story as the Panthers rallied in the ninth inning to score clutch runs in decisive games, earning their ticket to the College World Series. In the CWS, Chapman had to fight its way out of the elimination bracket to advance to the Division III Championship Series by beating the University of Massachusetts, Boston, twice in one day. The second victory came by an 8-4 score and sent the Panthers to the finals.

The team’s 44 victories is a school record. In addition, the pitching staff set a Division III mark with 523 strikeouts.

True to form, Chapman made key plays in later innings of their 8-4 win, supporting senior pitcher Jonathan Hernandez, who threw eight strong innings. A breakthrough moment came in the fourth, when junior Aaron Wong tripled to center field, driving in two runs and giving Chapman the lead for good.

In game one of the Championship Series against Birmingham-Southern, senior All-American Tyler Peck pitched an impressive seven innings, not long before he was selected by the St. Louis Cardinals in the Major League Baseball draft. On offense for Chapman, junior Joe Jimenez hit a solo home run to help power the Panthers to a 6-4 victory.

In game two, senior Mason Collins threw the best game of his life, pitching nine scoreless innings. Despite an injury, freshman Brad Shimabuku boosted the team with a two-run homer that put Chapman up 3-0 in the seventh inning. Then an eight-run outburst in the eighth sealed the deal for the Panthers. The final out of their 11-0 win triggered a wild championship celebration on the field.

“We were all just fired up. In the eighth inning, everything fell into place,” Shimabuku said.

Even days after the Panthers secured the title, “It still hasn’t sunk in,” said Chapman head coach Scott Laverty, named D3baseball.com 2019 National Coach of the Year. “The fact that we were the last team standing is humbling and reflects that we have so many great people. This was a never-give-up comeback team.”

Sophomore pitcher and All-American Nick Garcia reflected on the role of the Panthers’ senior leadership.

“There is no better way to see this group of seniors leave. They put their hearts into this program,” he said.

What’s next for the Panthers? The pursuit of another national title, of course.

“We know we can achieve a national championship. It’s a program where that’s what’s played for,” Laverty said. “Fifteen minutes after we won, Shimabuku says, ‘OK, Coach, we’re coming back next year.’ That’s the mindset.”

“Winning a national championship was the goal from day one, and I don’t think we’ll change that goal.” Shimabuku says. “We’ve got a young core and experience going forward. We’re going to be prepared for next year.” 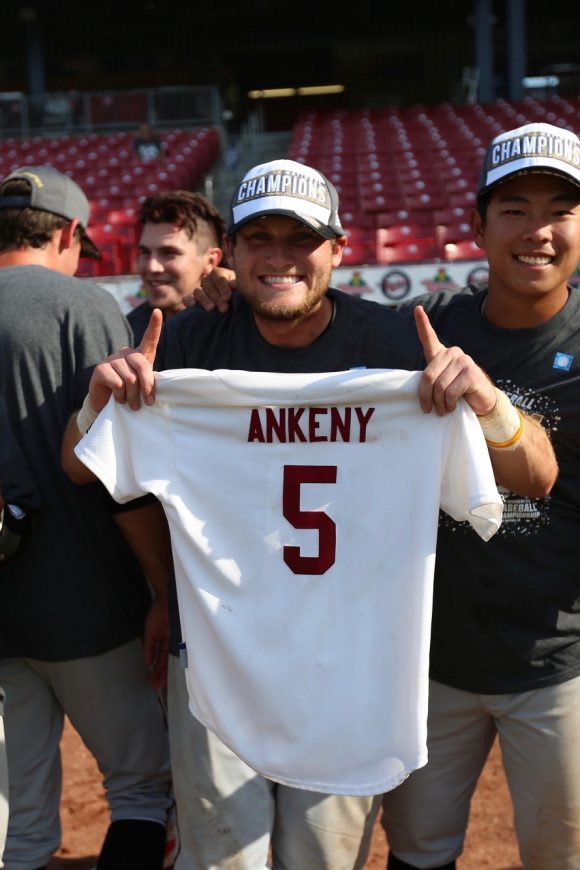 Chapman baseball coach Scott Laverty credits the team’s resilience to a young man who inspired the Panthers while battling leukemia. The team befriended Carter Ankeny and his family through a mentorship program called Teen Impact.

“If someone struck out, Carter would still be there to give you a high five,” Laverty said. “Our mindset is a direct reflection of the things we’ve learned from Carter being a part of our program: Win or lose, it’s gonna be OK.”

After working with the team for close to two years, Ankeny passed away in fall 2017 shortly before his seventh birthday. The team honors Ankeny by raising his jersey high in team pictures – including those taken after the Panthers’ national championship victory in June.

“The family still comes to practices and flew to Iowa (for the College World Series),” Laverty said. “Carter is a huge inspiration to us still.”