Birth of a Dialogue

In her first year at Chapman University, Arianna Ngnomire noticed a certain old film poster displayed in a long hallway leading to class. She stopped in her tracks.

“I thought, ‘Am I going nuts? Is that … ?’ I had to check in with my friends, who said yeah, that’s not right,” Ngnomire recalls.

What caught her attention that day in the halls of Dodge College of Film & Media Arts was a vintage poster promoting D.W. Griffith’s 1915 film “The Birth of a Nation,” a vicious drama that portrays the Ku Klux Klan as the heroic saviors of an Old South oppressed by post-Civil War Reconstruction. Alongside the poster was an original newspaper advertisement for the movie, framed in poster style.

Historians and film scholars alike note the silent film’s complicated history. They admire its artistic techniques, but also say its hateful message revived the Klan and unleashed generations of violence against blacks.

But none of that contextual information was provided with the display, part of a larger collection of vintage movie posters, ranging from “Casablanca” to “The Ten Commandments,” that adorn the hallways leading to the classrooms, sound stages and editing bays in Marion Knott Studios, home to Dodge College at Chapman.

First-year students are busy, though, so Ngnomire ’19 moved on. But she wasn’t the only one who noticed – and remembered. So this spring, buoyed by the camaraderie they found in the Black Student Union and moved by a photo of the posters tweeted out by a grad student, several students decided it was time to speak up.

They called for a re-evaluation of the display, organized a peaceful protest and asked the administration to take action, perhaps even create a museum-like display that would paint a fuller picture of the film’s legacy. Chapman President Daniele Struppa requested Dodge College faculty to weigh in. The faculty voted to return the two items to their donor, the granddaughter of legendary filmmaker Cecil B. DeMille.

Students and faculty from across campus cheered the decision and the posters’ removal. If the story ended there, it would be little more than a footnote now. But something more was sparked, say the three key student leaders behind the effort – Ngnomire, Naidine Conde ’20 and Jae Staten ’20. The University’s response opened a door to real discussions about the concerns students of color have on a majority-white campus. And that, the students say, can only build a better Chapman for everyone.

“Now it feels like we have a path to walk on and we can do it together,” Ngnomire says.

“Now it feels like we have a path to walk on and we can do it together,”

To be sure, there were uncomfortable moments. But just as a pearl grows from a gritty bit of sand in an oyster, the players in this cause all say something valuable evolved from the frank conversations, long meetings and student forums.

“Our students turned their encounter with the poster into a moment of learning,” he wrote in an editorial published in The Panther newspaper.

They performed a fair amount of teaching, too, by role-modeling a constructive style of activism that belied their youth, says Jerry Price, Ph.D., vice president for student affairs and dean of students.

“It was the strength and maturity of their argument and the maturity of their approach that led to their success. They should be proud of that, and we respect them for that. They made a really good argument, and with enough time to discuss and reflect we agreed with them,” he says.

Indeed, the University was thankful. Price shared the students’ view that having the movie poster and ad displayed without explanation made them appear to be novel collectibles rather than artifacts from a troubled history.

“What I regret most is that we needed students to bring this to our attention,” Price says. “That was a real oversight on our part.”

The students agree. The old poster and newspaper ad caused genuine pain they’ll never forget, but they are also proud that they were able to shine a light on the challenges for black students who attend a university where they are a small demographic. That’s special, says Conde, president of the Black Student Union. Because while they, like all students, will connect with all sorts of classmates through shared majors and other interests, it’s important to still not be swallowed up by the crowd, Conde says.

“Diversity and inclusion often feels more like diversity and assimilation,” she says. “It was nice during this process to feel like we have our own voice.”

The bumpy experiences they describe run a spectrum, from being the only black student in a history class and feeling like they have to speak for the entirety of the black experience, to not being able to find a nearby hair stylist to suit them.

“Diversity and inclusion often feels more like diversity and assimilation. It was nice during this process to feel like we have our own voice.”

Efforts are underway to ease transitions and meet needs, Dean Price says. Price is assembling a task force to study the experience of black students on campus, and he plans to use that information to create programs and support systems that help. On the flip side, Price wants to identify situations that exacerbate the sense of isolation some say they feel.

In addition, he plans to invite students to review the campus for other displays that may potentially benefit from better, contextualized presentations.

The students are encouraged by the momentum. After a busy finals week, the three who led the poster response gathered on campus to reflect on the experience. When the removal of the poster comes up, they smile and snap-snap-snap their fingers in the popular style of respectful applause.

More important, they are energized by what they describe as a labor of love.

“Chapman is going to be our legacy. We want to be part of a University that stands by what we so strongly believe in,” says Staten, who was one of the more impassioned speakers during the open forums of spring. “So yeah, I love it here. I wouldn’t be fighting for it if I did not love it.”

They acknowledge that more work remains, but they take heart that they aren’t alone in the cause – a realization that surprised them this spring. Their small demographic multiplied when it came time to speak up, as other students joined them, lining the hallway in a protest march to the poster, standing chockablock in the Cross Cultural Center for a student forum and filling the steps of Memorial Hall for a peaceful demonstration.

That was something they’ll also never forget.

“My takeaway is to have a little bit more faith. I was surprised to see the people who spoke up, people who weren’t as affected as the black students,” Conde says.

Friendship makes every challenge easier, she says. And as she looks ahead to her senior year, she trusts there will be more of that to go around, helping pave the way forward.

“It took the help of our allies to get a little bit more recognition. It took a lot of effort,” Conde says. “We’re a community. And you can’t support community without unity.”

“Chapman is going to be our legacy. We want to be part of a University that stands by what we so strongly believe in. So yeah, I love it here. I wouldn’t be fighting for it if I did not love it.” 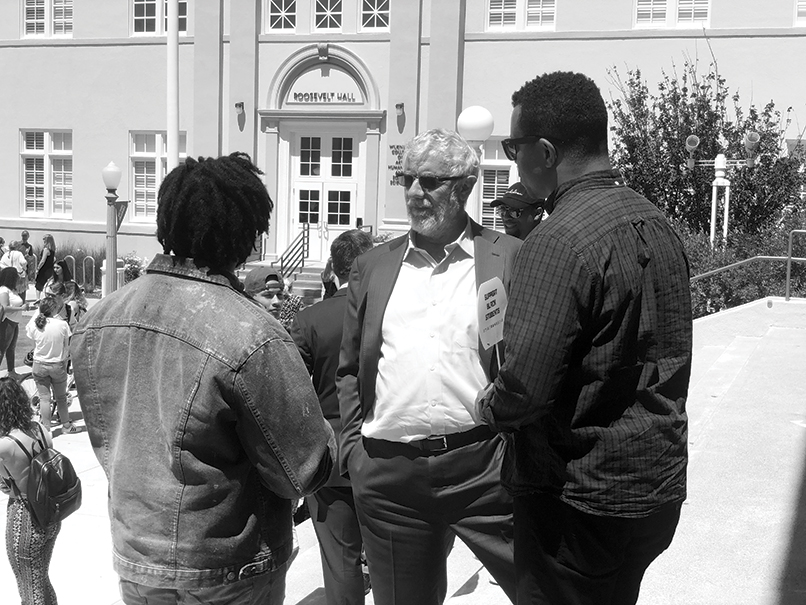 On April 18, Students organized a peaceful protest on the steps of Memorial Hall. President Daniele Struppa attended the event. Where students and faculty shared their personal accounts and points of view.

Lessons of Story and Impact

Legendary director D.W. Griffith is credited with numerous filmmaking innovations, from close-up shots to parallel action sequences that helped transform “the flickers” into a sophisticated art form capable of dramatic and compelling storytelling. Many of those artistic inventions made their debut in “The Birth of a Nation.”

But when Ronald McCants, a lecturer at Chapman’s Dodge College of Film and Media Arts, discusses the film in a First-year Foundations Course on American storytelling, the technical breakthroughs are secondary. In 1915, the advances were notable, but today they are mostly footnotes in the pantheon of innovations brought forward by numerous directors, writers, cinematographers and others who have advanced the art form, he says.

That’s the approach McCants, who is black, takes in his course and which he reiterated at a spring student forum to discuss the “Birth of a Nation” posters on campus.

“We talk about propaganda and how it can be destructive,” he says.

More significant than its artistic achievement is the film’s story and its impact, says McCants, a screenwriter who writes for film and television, including several episodes of the ABC sitcom “Speechless.” In his course, students learn how “The Birth of a Nation,” a film adaptation of the novel “The Clansman,” contributed to the rise of the Ku Klux Klan and the hate and violence that was experienced by generations of black Americans. The film’s depictions of racial violence and blacks as immoral savages are essential to any discussion of the film, he says.