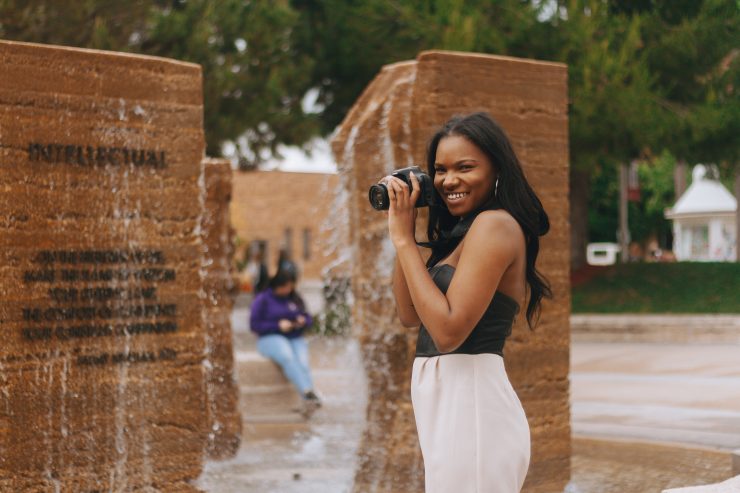 Courage and Compassion Is the Recipe for Change Graduating Senior Kyler Hannah shares what she's learned about building community and bringing positive change.

In addition to completing a double major in psychology and strategic and corporate communication, Kyler Hannah is graduating from Chapman with a legacy of research, activism and service. But it wasn’t always easy.

“It was honestly a bit of a culture shock,” Hannah says about her first year at Chapman. “I didn’t always have that sense of belonging.”

Hannah grew up in Long Beach, one of the most diverse cities in the United States. While Long Beach is only 30 miles from Chapman’s main campus in Orange, it sometimes feels like a different world. With African Americans making up just two percent of the student population, not surprisingly, Hannah didn’t always feel represented.

But in this environment, she pushed herself to examine her identity. Being an active member of Chapman’s Black Student Union (BSU) made her “feel the most culturally aware” she has ever been in her life. “It taught me so much about the black experience,” she says. Fellow BSU members taught her about aspects of popular and historical culture that have shaped the African American experience in ways she hadn’t thought about before.

It taught me so much about the black experience.

Since starting college, Hannah has thought a lot about the ways representation—or lack thereof—affects people. An avid photographer, she started the #CUMelanin project with the goal of depicting the experiences of black students at Chapman and addressing her school’s need for more representation. People in her photos wear white shirts in a nod to a University of Missouri photography project that brings attention to shootings at historically black colleges. The BSU at Chapman has since adopted #CUMelanin as an ongoing project, and Hannah is thrilled that it will continue after she graduates.

The Power of Community

Her membership in a sorority has also been a powerful communal experience. “Seeing so many strong and successful women has helped me realize who I am,” says Hannah. Even within these groups, however, Hannah sometimes feels like she’s looking in from the outside. For example, her sorority has a tradition of fixing their hair with a curling iron for pictures. “But my hair doesn’t naturally do that,” she says, holding up one of her braids. Such moments have shown her that some traditions might need to be revised, and that diversity and compassion can push people to view the world beyond their own experiences.

Seeing so many strong and successful women has helped me realize who I am.

Hannah sees empathy as a key mechanism of positive change, whether it’s on a college campus or in the workplace. Her undergraduate research has only solidified that belief. With guidance from her psychology professor, Dr. Brynn Nodarse (Crean College of Health and Behavioral Sciences), Hannah recently conducted a study about empathy and respect in the workplace.

“When a supervisor shows compassion for their employees,” says Hannah, “job performance is improved in major ways.” Her results provided concrete evidence for an emotional truth she’s known for a long time.

Making change happen doesn’t only require compassion, though: you need courage. And Hannah has plenty. As Dr. Nodarse sees it, Hannah’s unique ability to combine those characteristics makes her a fierce presence.

“I asked my students this semester to describe their favorite fictional heroes,” says Dr. Nodarse. “Kyler picked Arya Stark from Game of Thrones—a fitting hero for a fearless student. Kyler’s days to come will be measured by the depths of her compassion, the lengths that she spans to protect others and the weight of her influence in the world. So when destruction attempts to harm the good she inevitably builds, she can stand tall against those forces and say, ‘Not today.’”

Challenge Yourself to Be Uncomfortable

Some of Hannah’s friends chose to attend historically black colleges, and she sometimes wonders if she should have, too. That said, she firmly believes that “Chapman really does let you personalize your education.” That flexibility has elevated her college experience in crucial ways. She’s molded her coursework and joined student organizations that have further demonstrated the power of community.

“I know I’ll always have Chapman,” she says emphatically. “I feel like I’ll always be able to reach out to my teachers and classmates.”

Hannah’s mother, a life coach, also majored in communications and psychology. For a long time, Hannah didn’t think she’d ever pursue those fields. As she nears graduation, however, she can’t picture herself majoring in anything else.

“Challenging yourself by making yourself uncomfortable can be really productive,” she reflects. “School taught me that you have to be willing to move past that uncomfortable stage. It’s in that space beyond where I’ve learned the most.”