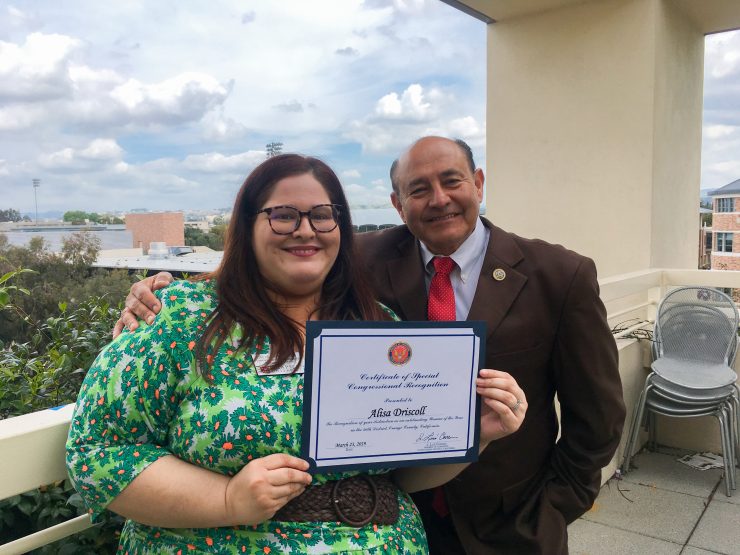 Alisa Driscoll (M.A. '19) poses with Congressman Lou Correa after being recognized as one of the 2019 Women of the Year.
Alumni

Chapman University’s Alisa Driscoll, a familiar face and friendly liaison between the University and the local neighborhood, was among the Chapman women honored by Congressman Lou Correa at his 2019 Women of the Year ceremony March 23 in the George Bush Conference Center.

An overflow crowd applauded more than 100 remarkable women Correa recognized for their contributions to the 46th Congressional District communities he serves in Orange, Anaheim, Garden Grove and Santa Ana.

Driscoll (M.A. ’19) has helped lead the University’s Office of Community Relations as communications and operations manager since 2016 and will earn a master’s in leadership development from Attallah College in May. She is co-chair of Chapman’s Advisory Group on the Status of Women, a committee whose efforts toward diversity and inclusion include planning International Women’s Day events on campus. She also was selected 2018 Volunteer of the Year by Friendly Center, a local family resource nonprofit.

“Alisa is a hard worker who participates in many ways, from helping with to leading projects and events,” said Jack Raubolt, Chapman’s vice president for community relations. “She always has a smile for everyone and a kind word.”

Display image at top/Alisa Driscoll (M.A. ’19) is greeted by Congressman Lou Correa after being honored at his 2019 Women of the Year awards.