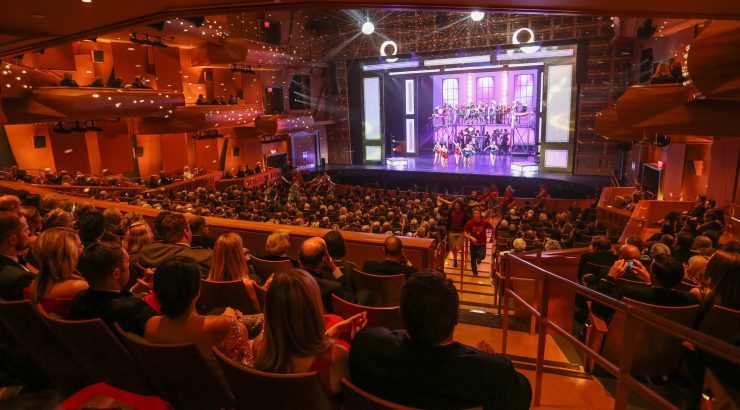 A founding member of the Grateful Dead. An Emmy-winning television producer. Two dynamic philanthropists. At Chapman Celebrates, all were proud Panthers in support of student scholarships.

One is a founding member of the Grateful Dead. Another an Emmy-winning television producer. And two are among Southern California’s most dynamic philanthropists. But at Chapman University’s signature fundraiser Saturday, Nov. 3, they were all proud Panthers in support of a singular mission – student scholarships that change lives.

“I love this school, and I love that this is a scholarship event,” said rock legend and Chapman parent Bob Weir, who received the University’s Lifetime Achievement in the Arts Award during the 37th Annual Chapman Celebrates 2018 Gala Night.

Indeed, while “Music from the Silver Screen” was the motif of the festivities and Broadway-style revue performed at Musco Center for the Arts, generosity was the overriding theme of the evening, which raised nearly $2 million in scholarship support, benefiting every discipline and major across campus.

Chapman Trustee Zeinab H. Dabbah, M.D., (JD ’12) and Daniel Temianka, M.D., were named the University’s Citizens of the Year. The couple’s passionate involvement at Chapman touches every corner of campus, including at the Hall-Musco Conservatory, where they established the Henri Temianka Professorship in Music and Scholarship in String Studies. The professorship is named for Daniel’s father, founder of the famed Paganini Quartet.

Casey Kasprzyk ’01 received the 2018 Alumni Achievement Award the previous evening at the Chapman Celebrates Opening Night. Today Kasprzyk is a 15-year veteran of the CBS daytime drama series “The Bold and the Beautiful.” His remarks brought home the importance of the event’s enduring cause throughout the decades.

“This event has always been very important to me because as a Chapman student I was the recipient of a Provost Scholarship,” he said. “Now, that Provost Scholarship made it possible for me to attend Chapman, which resulted in me being able to achieve my dream of working in television, which resulted in me becoming the supervising producer of the most watched daytime television series in the world, “The Bold and the Beautiful.”

Several cast members from the daytime drama attended the gala to join in celebrating Kasprzyk, who even arranged for a birthday cake to be delivered to a cast member during the gala dinner.

Students and recent alumni were featured on stage and in video highlights screened during the evening, including Jasmine Johnson ’15, who found encouragement and scholarship support at Chapman after a life of homelessness.

“The scholarships I received gave me a new life. They gave me a purpose and showed me that people cared and were willing to help me succeed in life. It showed me that I wasn’t alone, and I will forever be grateful for that,” Johnson said.

Major gifts are not the only source of scholarship support, though. In his remarks Chapman President Daniele Struppa noted that most gifts are much more modest.

“Last year alone, Chapman was the recipient of more than 13,000 gifts, amounting to more than $100 million in support. That’s unbelievable, right? What’s even more remarkable is that the majority of those gifts were less than $1,000. It demonstrates the importance of each and every gift and how much impact each gift can make,” Struppa said.

As always, the event was also a world-class entertainment success. The evening began with guests arriving to tap-dancing student performers and a glittering reception on Attallah Piazza, transformed by sparkling white lights that set the tone for the silver screen theme of the evening.

Guests then filled Musco Center for the Arts, where more than 100 student dancers and vocalists performed an excellent musical revue of classic numbers from screen and stage. The show opened with a nostalgic rendition of the “Casablanca” classic “As Time Goes By,” included a showcase of opera talent when student tenors Stephan Lee, Isaak Momsen, Daniel Sanchez sang the hallmark “Time To Say Goodbye,” and concluded with an all-cast performance of the title number from “Fame.”

Planned into the program but kept secret until the last moment was Weir’s acoustical guitar performance of “Easy to Slip.”

Following the show, the festivities continued at an elegant, candlelit dinner dance. As is tradition, Chapman students circulated among the tables, personally delivering hand-written thank-you notes in appreciation of the attendees’ support.

Since its founding, Chapman Celebrates – formerly called American Celebration – has raised more than $35 million for scholarships.

Display image at top/Student performers dance in the aisles during the show’s closing number.

Chapman Celebrates scholarships The Bold and the Beautiful