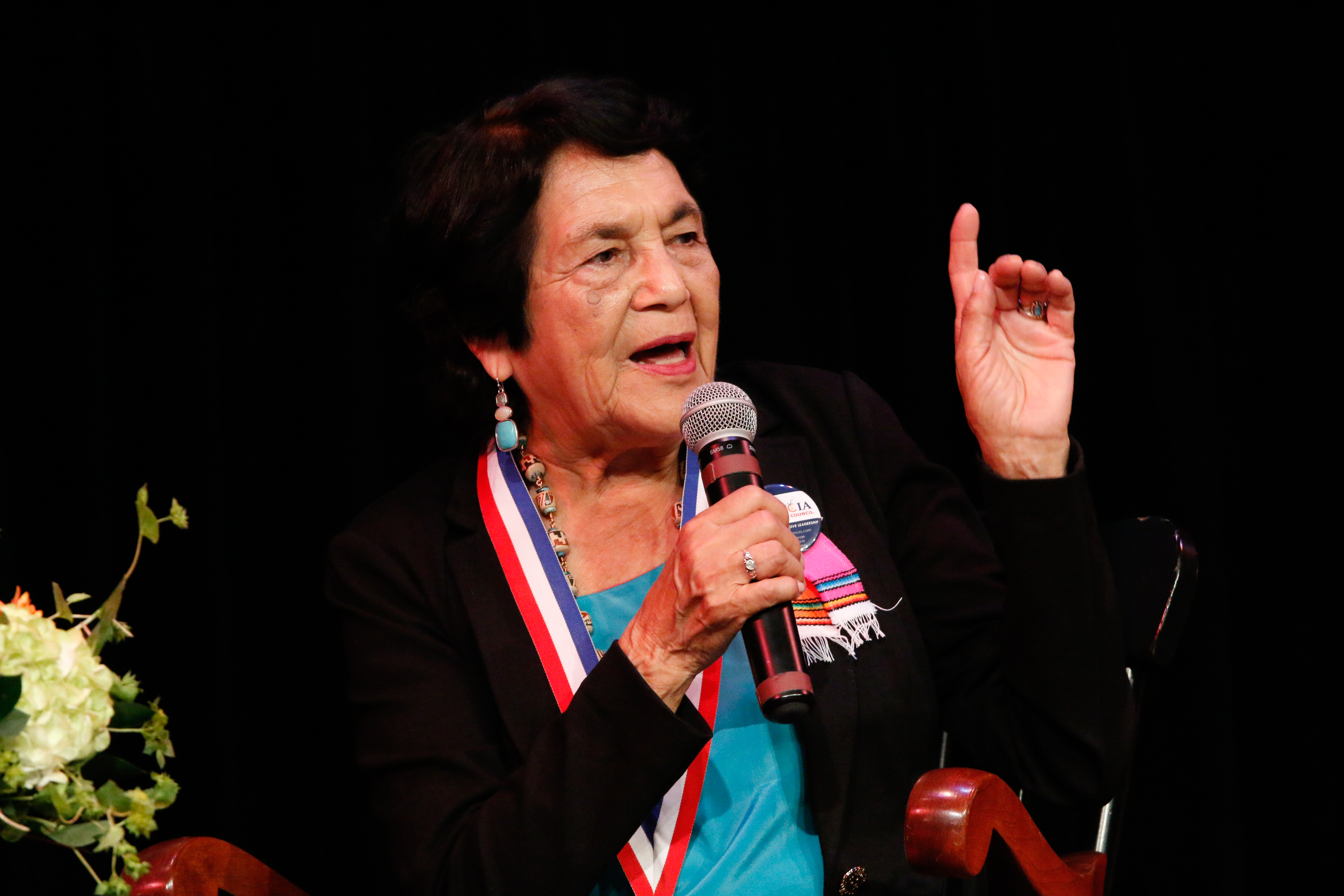 ‘The Future is in Your Hands,’ Civil Rights Activist Dolores Huerta Tells Students at Chapman University

When Dolores Huerta comes into town to speak, don’t plan on getting too comfortable in your seat. Because the 88-year-old labor leader and civil rights activist who co-founded the United Farm Workers Association with Cesar Chavez is still fighting, and she’s not shy about nudging others to get out and do likewise.

During a town-hall-style conversation with Chapman University President Daniele Struppa on Monday evening, she urged her audience in Memorial Hall to not just vote but work for candidates in the midterm elections. Volunteer to canvass. Sign up to phone bank. Then keep on going.

“You all are so lucky because, number one, you have your devices and your cell phones and your computers,” she said. “You have many more tools than we had when we were organizing. The main thing is to become active. … Come out and work. I believe the future is in your hands.”

Not that Huerta is ready to wrap up her role as a powerhouse activist. She can explain in detail the ongoing work of the Dolores Huerta Foundation in California’s Central Valley, where organizers are active in 10 school districts and multiple other jurisdictions, from city councils to boards of supervisors. She still stirs audiences with her hallmark rallying cry —  “Sí, se puede — yes, it can be done,” as she did in Memorial Hall, where she was  greeted with a standing ovation and presented with a Chapman University Presidential Medal for her commitment to social justice.

During the conversation with Struppa and in a Q&A that followed, Huerta urged the audience to join her ongoing work.  She echoed the words of the late Robert F. Kennedy, who was a friend and supporter, saying that it is everyone’s obligation and responsibility to help poor and disenfranchised communities.

“We are the many, we are the majority. But again if our voices are silent, if we don’t take the actions we need to take, then nothing will change,” said Huerta, whose visit was sponsored by the Attallah College of Educational Studies.

She offered practical advice, too. On the neighborhood level, grassroots efforts must be methodical, she said, describing the model used by her foundation. They start with a single organizer, host house meetings, conduct 200 one-on-one conversations with residents, build a priority list that may include anything from streetlights to a community swimming pool, hold more house meetings and then launch visits to the appropriate city council, board of supervisors or school board.

From that, a community earns essential improvements, and often the new activists are inspired to run for local office.

“It’s time-consuming, but it’s not difficult work. It just takes a lot of time,” she said. “We do it all year-round.”

Speaking about the highly charged political climate of the moment, Huerta likened it to the turbulent 1960s.

Huerta attributed many of the present divisions to misogyny and, especially, institutionalized racism, saying it has created a school-to-prison pipeline for youths of color and sidelined the histories of indigenous people, descendants of slaves and others who helped build the country.

“To end racism, we have to teach science. We only have one human race – homo sapiens. One human race,” she said. As she briefly described the earliest human migration out of Africa, she added that it was a lesson white supremacists especially needed to learn. “We are all Africans of different shades and colors.”