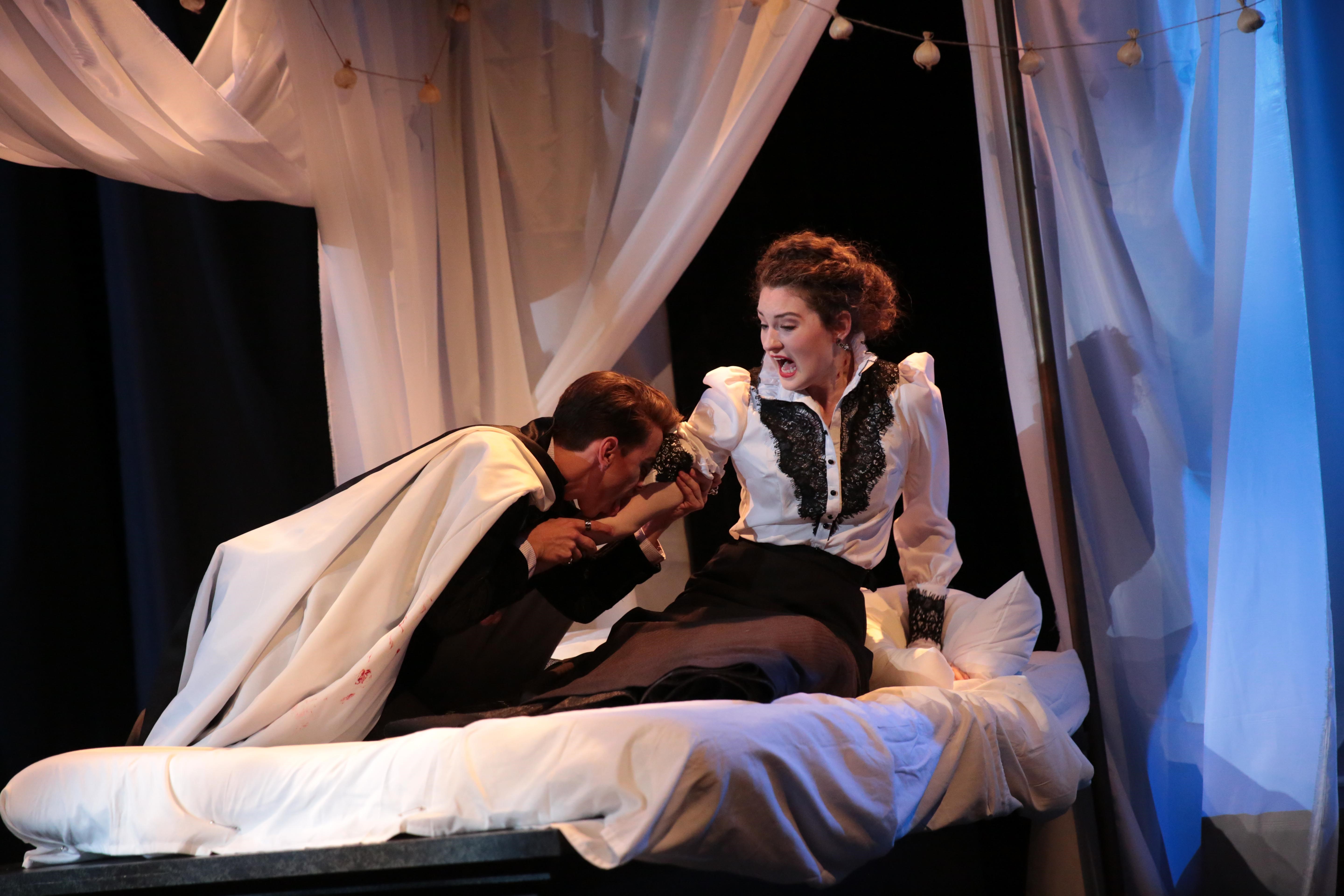 Monsters Among Us Beasts old and new take the stage in Chapman University's 2018-2019 theatre season.

Monsters aren’t just the stuff of Halloween, swooping onto the scene in the trappings of their kind – capes, fangs, flying brooms and all the rest – then exiting stage left until next season.

People can conjure them up like a wicked brew, with fear of the unknown as a key ingredient, says John Benitz, chair of Chapman University’s Department of Theatre in the College of Performing Arts.

“It’s a sad instinct we sometimes gravitate to. Once you’ve successfully objectified a group or person, it makes it easier and possible to display hate against them,” Benitz says.

Monsters and the Other

Such modern beasts take the stage in the university’s theatrical lineup for the 2018-2019 season, built around the theme Monsters and the Other. The season opens with the classic “Dracula” and follows with a variety of plays that ponder this fear of the outsider and “hold a mirror up to the monster within us,” Benitz says.

Other productions will examine hate crime, war and even the bumpy business of facing diversity. Among them will be a special one-night performance of of “If All the Sky Were Paper,” a play by Chapman University Presidential Scholar Andrew Carroll that features readings of letters written by service members in American conflicts from the Revolutionary War to the U.S. war in Afghanistan. Celebrity cast members include Annette Bening, Ed Asner and Gary Cole.

The professor of theatre hopes the season will serve as a meditation on an uncomfortable aspect of human nature.

“We’re really trying to unpack this idea of how we make monsters of the other. It just seems so relevant. How do we break through that?” he says.

The #MeToo movement and the immigration crisis at the border helped spark the theme. But tough topics are familiar territory for the department’s theatrical selection committee, which includes students and faculty.

“We’re always looking to produce theatre that starts a conversation. Certainly, it’s about entertainment. We want people to experience top-quality entertainment. But in the end, we want to create dialogue, give them something to consider and be moved emotionally, and perhaps even changed a bit,” he says.

“We have incredibly talented students and so it is fitting to create a season that reflects that talent and makes a playground for that talent to thrive,” Benitz says.

He’s still the Dracula you know, but more sinister than ever in this contemporary adaptation.

“If All the Sky Were Paper”
by Andrew Carroll
Directed by John B. Benitz
November 10

A play about one man’s search for extraordinary war letters. Celebrity cast members for this one-night production include Annette Bening, Ed Asner and Gary Cole.

A contemporary work that uses a 17th-century witch hunt to condemn past and present oppression of women.

They’re young, randy and living amidst strangers in New York City. And they’re puppets. Diverse and hilarious puppets. This production of the Tony Award winning musical will be staged in Musco Center for the Arts.

A young woman discovers her late sister’s Dungeons & Dragons notebook and journeys into a world laden with action, comedy and life lessons.

Tickets are available online at chapman.edu/events-copa or by calling the university box office at (714) 997-6624.