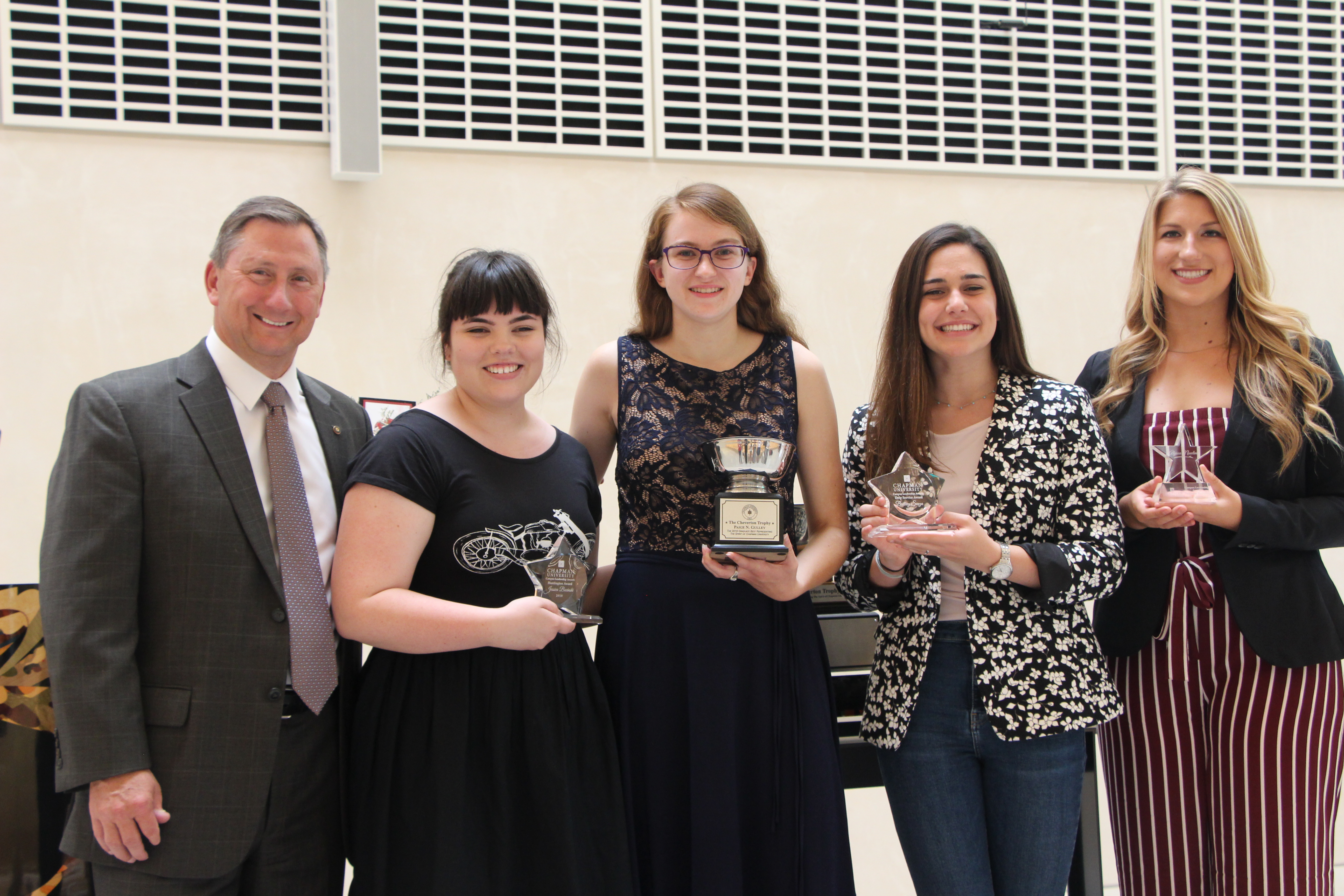 She wrote three thesis papers—two in English and one in French. Her research focuses on the politicization of language. She is described as having fundamental conviction “that we should always behave so as to treat with respect the dignity of reason and moral choice in every human being.” And she’s a section leader in the Pride of Chapman Pep Band, to boot.

On Friday, May 4, students and members of the Chapman Family gathered in the Fish Interfaith Center for the 10th annual Campus Leadership Awards, where Gulley was presented with her award. Each year, the Campus Leadership Awards shine a spotlight on exceptional undergraduate students, recognizing both academic achievement and civic engagement.

The Cheverton Award is the highest undergraduate student honor at Chapman University and is bestowed upon a graduating senior each year. Students are not nominated for the Cheverton Award; they are invited to apply by the faculty based on their outstanding academic record and selected by a vote of the full Chapman faculty.

Gulley is continuing her studies at Chapman next year as part of the integrated 4+1 master of arts program in War and Society. Kayla Katzman, Connor Kridle, Sara Siwiecki and Verónica González Kompalic were selected as finalists for the Cheverton Award.

Other graduating seniors honored at the 2018 Campus Leadership Awards included:

A nominator described Asato, a sociology major with minors in LGBTQ studies and women’s studies from Honolulu, Hawaii, as a “fierce and persistent advocate for equity.”

Paul S. Delp Outstanding Service Award: Brittney Souza
The Paul S. Delp Award is presented to the graduating senior judged to have made the greatest contribution through voluntary service to the community at large. This award is based upon the student’s entire record of service since freshman year.

Souza, a double major in political science and peace studies with a minor in religious studies from Gilroy, Calif., was celebrated by nominators for her dedication to “promoting dialogue and bringing communities together” and her ability to “see the potential in others that we often don’t see in ourselves.”

“She is the most prepared, thorough, and intellectually curious undergraduate student I have worked with in close to 20 years of teaching,” said one nominator about Bocinski, a double major in art history and anthropology from San Diego. Another commented, “she is far and away the most academically gifted student I have taught in my 30 years at Chapman.”

Gloria and Julian Peterson Award: Alyssa Nowlen
The Gloria and Julian Peterson Award is awarded to the outstanding graduating senior who has excelled in scholarship and given distinguished leadership in their dedication to enriching University life. This student must exemplify leadership as represented in at least three of the four pillars that guide Chapman University: Intellectual, Physical, Social and Spiritual.

Nowlen, a biological sciences major with a minor in leadership studies from Morgan Hill, Calif., was described by a nominator as “the epitome of the Chapman experience.”

Other accolades presented at the 2018 Campus Leadership Awards included: