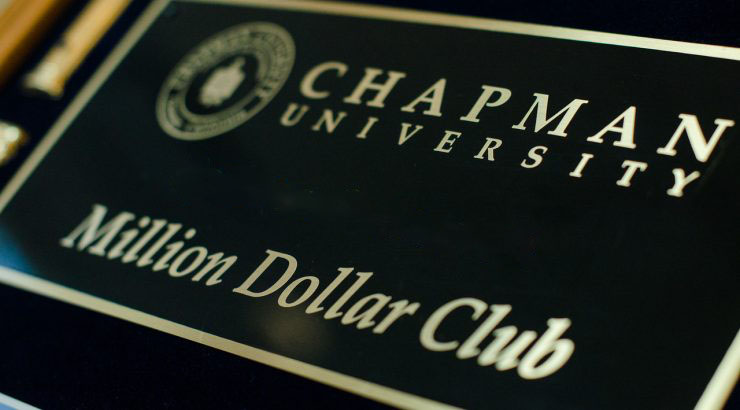 A record-setting 10 professors are the newest members of Chapman University’s Million Dollar Club, a distinction awarded by the Office of Research and University Advancement to faculty who have brought in $1 million in external funding and donations while at Chapman.

It is the largest cohort to receive the honor, representing disciplines throughout the campus, from computer science to history. Such growth is emblematic of Chapman’s rising strength and reputation as a research institution, said Thomas Piechota, Ph.D., Chapman’s vice president for research. Moreover, it builds academic standing in the scholarly community, he said.

“Research and creative activity help both our students and our faculty, but they also enhance our national reputation,” Piechota said during the first State of Research and Creative Activity Address, at which the faculty were formally honored.

Piechota’s report also highlighted several other signs of research growth at Chapman, including a 22 percent jump in research expenditures in 2016, up to $6.55 million.

In addition, in 2017 the University established 31 partnership agreements for research with outside organizations, evidence of the University’s expanding reach and respect, he said.

“The work we do at Chapman has real economic impacts, in terms of the growth of our community. … Much of that work is sponsored by external entities and donors, and that’s what enables a lot of this work,” he said.

The Million Dollar Club has grown to include 30 faculty members since its founding in 2007.

Chemistry major and aspiring oceanographer Emma Kocik ‘22 has been selected as a 2021 Barry Goldwater Scholar, the most prestigious scholarship given to undergraduate students in the natural sciences, engineering and...