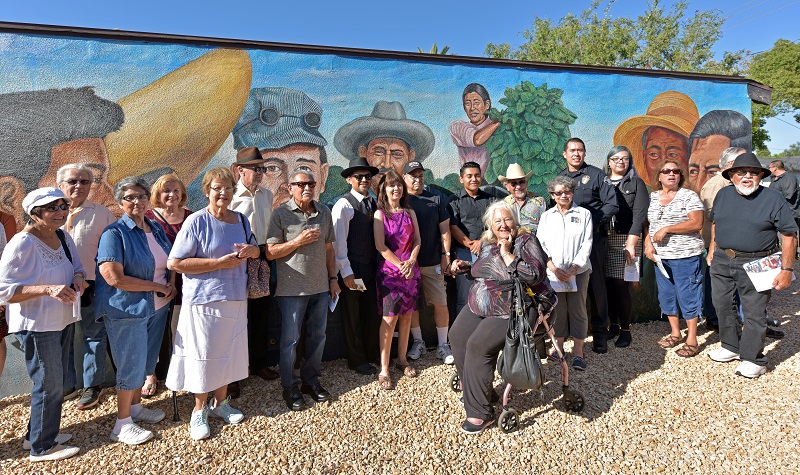 It was the golden-brown eyes and work-worn face of the man in the outdoor mural that stopped the Chapman University student in her tracks.

“It’s beautiful,” said Amanda Remy ’21, whose grandparents came from Mexico. “My family traditionally had the lighter brown eyes, so the way the eyes kind of seem to glow, that reminds me a lot of my grandpa.”

Such personal connections to the artwork of acclaimed muralist Emigdio Vasquez were in abundance at an afternoon opening reception and tour Wednesday, Sept. 13, at the site of the mural, titled El Proletariado de Aztlán (The Proletariat of Aztlán), created in 1979 by Vasquez. And perhaps none were more profound than those of the late artist’s son, who was hired by Chapman to restore what many consider to be his father’s masterwork.

“For me, this was the dedication I was waiting for,” said artist Higgy Vasquez. “It means so much to me and to the people of the neighborhood, too.”

The event marked the university’s official opening of its exhibitions included in the Getty’s Pacific Standard Time: LA/LA, a sweeping assemblage of some 70 art shows and displays across Southern California exploring Latin American and Latino art.

Located in the historic Cypress Street Barrio, the mural is the catalyst for Chapman’s participation in the initiative. Painted onto the exterior garage walls of a single-story apartment building, the artwork illustrates Mexican-American history with depictions of an Aztec warrior, immigrant farmers, local barrio residents, the neighborhood store, car culture, revolutionary leader Che Guevara and labor leader Cesar Chavez among its scenes.

Vasquez’ work was long admired for its dignified expression of Chicano culture and realistic scenes of sometimes gritty human life. His oil paintings have been widely exhibited in museums and galleries and the iconic murals adorn the walls of several public buildings, colleges and city halls in Orange County.

Still, the newly energized recognition for Chicano murals would astound him, said his daughter Rosemary Vasquez-Tuthill.

“He never would have seen that coming. He would have been surprised and he probably would have said it’s long overdue,” said Vasquez-Tuthill, who is also a painter.

The mural’s inclusion in Pacific Standard Time also set the stage for a unique collaboration between Chapman and its neighbors, said Provost Glenn Pfeiffer, Ph.D.

“It’s an opportunity to recognize and honor the Latina and Latino heritage here in Orange County and draw upon the support of our neighbors, the Orange Barrio Historical Society and the Orange Public Library,” Pfeiffer said.

Another major Chapman exhibit in the Getty project is the ongoing creation of a mural project by Higgy Vasquez, with a Chapman senior assisting. The mural will be painted on a wall flanking the courtyard at the entrance of Moulton Hall and progress throughout the semester. The university’s history will be the mural’s subject.

Other related Pacific Standard Time projects at Chapman include:

El Proletariado de Aztlán is located in a residential neighborhood at 446 N. Cypress St. and is viewable from the public sidewalk. All Chapman exhibitions are free to the public.

Find related coverage of the mural exhibition in The Los Angeles Times.

Display image at top/Neighborhood friends and members of the Orange Barrio Historical Society join Higgy Vasquez and Rosemary Vasquez-Tuthill at the reception for Chapman’s exhibitions in the Getty’s Pacific Standard Time: LA/LA.