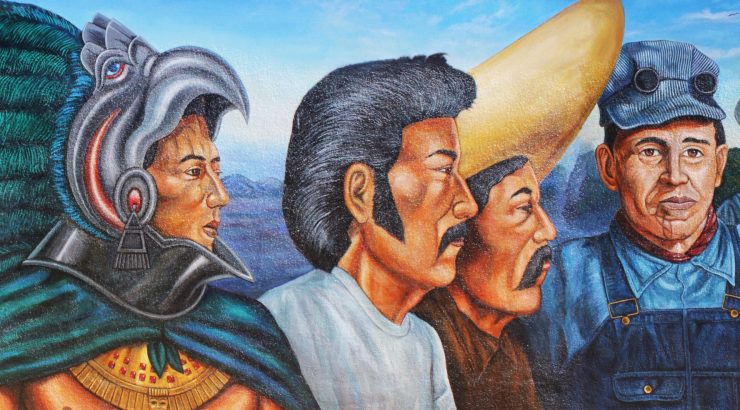 Chapman is one of only four institutions in Orange County participating and will feature exhibits on and around the campus showcasing a variety of art created by Latino and Latina artists. The exhibit opens September 13, 2017, and runs through January 31, 2018. The title of the project is:  My Barrio: Emigdio Vasquez and Chicana/o Identity in Orange County.

“Chapman is so pleased to be a part of the Getty’s Pacific Standard Time: LA/LA,” said Natalie Lawler, curator of art collections at Chapman University. “We are looking forward to highlighting Emigdio Vasquez as our hometown hero in Orange, as well as the continued relevance of his work today.”

The springboard for Chapman’s exhibition is a mural painted in 1979 called El Proletario de Aztlán, by famed local artist Emigdio Vasquez. The mural is located in the City of Orange’s Cypress Street Barrio – just a few walking blocks from Chapman’s main campus. Chapman University restored the mural in 2013. Figures in this early mural are bookended by a regal Aztec warrior standing in the mythic space of Aztlán – the legendary home of the Aztec people – and dignified portraits of family and neighborhood friends. Members of the Orange Barrio Historical Society will help train student art ambassadors to serve as docents and interact with visitors.

“We are using the mural as a guiding post,” said Lawler. “All our themes are coming from it: family, friends, everyday life, labor, agriculture, protest, and Chicano life in Orange County. The historical significance of this piece and the fact that it is located in a working/living neighborhood that it represents really brings the exhibition to life.”

A second PST: LA/LA exhibit at Chapman is a living mural in that the painting of it will commence in September by Chicano artist Higgy Vasquez, son of Emigdio Vasquez, who also completed the restoration of the Cypress Street mural. Visitors will be able to watch the artist paint throughout the exhibition. The mural will be centered on Chapman University history and is made possible through a $30,000 donation from the Ellingson family. Students from Chapman University and nearby Orange High School will also assist Vasquez in painting.

A showcase of archival objects, ephemera, and photographs with a focus on Chicanos in Orange County. This student-led exhibition was formed in collaboration with an interterm course on the Chicano/a art movement. Students helped to develop the displays and content, and will be assisting in the installation and preparation.

Visitors to Chapman’s four PST: LA/LA exhibitions can use a brochure for a guided personalized walking tour. Eight artists in total will be featured with more than 100 pieces showcased. In addition, symposia will be offered to discuss aesthetics, politics and ongoing history of the mural art form and Chicano murals.

All participating PST: LA/LA exhibits will open September 15 and run through the end of January next year.

Through a series of thematic linked exhibitions, Pacific Standard Time: LA/LA will present a wide variety of important works of art, much of them new to Southern California audiences. The exhibitions will take a fresh look at major artistic movements and contemporary artistic practices. Topics will range from luxury objects in the ancient world to modern Afro-Brazilian art, from monographic studies of individual artists to broad surveys that cut across numerous countries. Using the collaborative approach that characterized the original Pacific Standard Time, this new initiative will involve dozens of organizations in Southern California as well as partnerships with institutions, curators, and scholars in Latin America. In exhibitions of consequence, Pacific Standard Time: LA/LA will go beyond the visual arts to touch on music, performance, literature and ideas and even cuisine. More information, including details about all the participating institutions, can be found at http://www.pacificstandardtime.org/