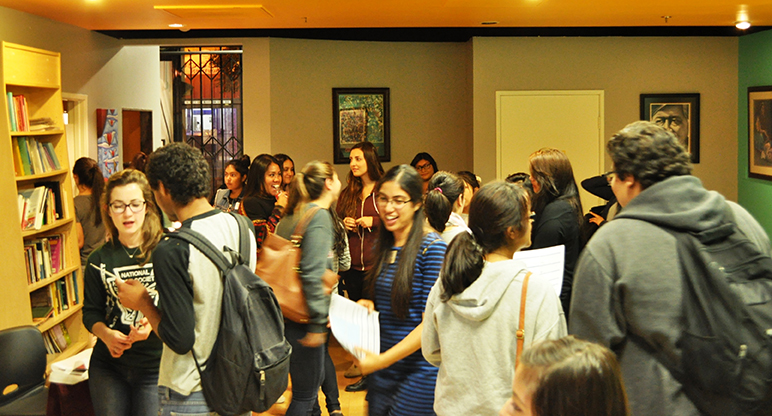 To that end, the CES will cease to operate the bookstore – which it took over from founder and well-known reading activist Rueben Martínez in 2012 — as a commercial enterprise, and is transforming it into a pre-kindergarten through adult center for education and culture for the Santa Ana community and its surroundings. Its new name will be the Centro Comunitario de Educación (Community Education Center), as of March 2016.

“The new name, Centro Comunitario de Educación, opens up a wide space for educational and community activities.  Transforming the space from a bookstore to an education and culture center is a step up in terms of our promise to the community,” said Margaret Grogan, Ph.D., dean of the College of Educational Studies.  She noted that the new center will build on the strong legacy founded by Martínez and his former bookstore.

“First in his barber shop and then in his bookstore, Rueben Martínez created an extraordinary and meaningful space in the community for the promotion of literacy and the arts, and this powerful legacy grounds our mission going forward,” Dr. Grogan continued, adding that inside the new Centro will be a dedication to Martínez, whose enterprise at one time was the largest Spanish-language bookstore in the country. “As a result of his early efforts – and, for the past three years, those of Dr. Anaida Colón-Muñiz, Maria Carmen Ceballos, and Dr. Mac Morante – Chapman and the CES are known in Santa Ana for creating learning opportunities and cultural events for local adults and children. The Centro offers CES and Chapman the opportunity to continue this important work and to take our vision to the next level
.
Rueben Martínez is fully supportive of what we are doing in this phase.”

Martínez, 75, a MacArthur “genius” grant recipient for his literacy work, will continue as a Chapman University Presidential Fellow with his mission to recruit students from underserved populations to attend college.

CES took over the Librería Martínez in 2012, with Martínez donating all its contents to the college.  The college intended to keep the retail bookstore open as a “social entrepreneurship enterprise,” in the words of then-dean Don Cardinal.  But the economic pressures and perils of running a bookstore as a commercial endeavor soon became apparent to the academics — just as they had been to Martinez, who told the
Orange County Register
in 2012 that he was losing at least $5,000 every month trying to keep the store open.

“The unfortunate fact is that brick-and-mortar bookstores have become very vulnerable because of Amazon and the ease of online purchasing,” said Dr. Colón-Muñiz, director of the Centro.  “And our aim, as the College of Educational Studies
,
is to promote education rather than sales. The idea

has always been to have this  become a real educational center for the community.  We’ll still have plenty of books for everyone to read when they visit, of course – it just won’t be a store dependent on making a profit to stay open. We are writing grants and seeking other funding sources to assist with this endeavor.”

The Centro Comunitario de Educación will offer a wide range of programs for community residents of all ages, partnering with such organizations as Padres Unidos, El Sol Science and Arts Academy, the Santa Ana Unified School District, Santa Ana College and other local community colleges.  For pre-school students, for example, the center offers a Reading Starts Early program, offering children the opportunity to listen to stories, learn to ask questions and fall in love with books.  At the end of the program, they take home a backpack filled with age-appropriate reading materials and a parent guide, thanks to a generous gift from the Lloyd E. and Elizabeth H. Klein Family Foundation.

The center also offers a Teen Mentoring Program, in collaboration with Chapman’s Civic Engagement Initiatives, to support mentees in career and college exploration and to engage them in their community, as well as adult education classes, hosting book clubs, poetry workshops and much more.  The center also presents literary and arts events throughout the year, all open to the community. Chapman CES students and their faculty members are fully engaged in facilitating the varied programs and partnering with the community to make them a success.

Future program plans include a Bilingual and Latino Education Professionals initiative aimed at meeting a critical shortage of Latino and bilingual teachers and other professionals in education.  “While between 50 and 90 percent of the children in many Orange County schools are Latino, less than 10 percent of the teachers represent this cultural and linguistic group,” says Dr. Colon-Muniz. “The goals of this program include early outreach in local schools, a closer working relationship with local community colleges, and collaboration with local agencies supporting similar aims. The program looks to provide information, incentives and access to teacher preparation and other education-related professions.” She added that the program projects that it could ideally educate more than 100 new bilingual and Latino educators over the next 5 to 7 years.

Delivering the Chapman Experience in a Virtual World

Students can still enjoy a rich tapestry of experiences beyond the physical campus.